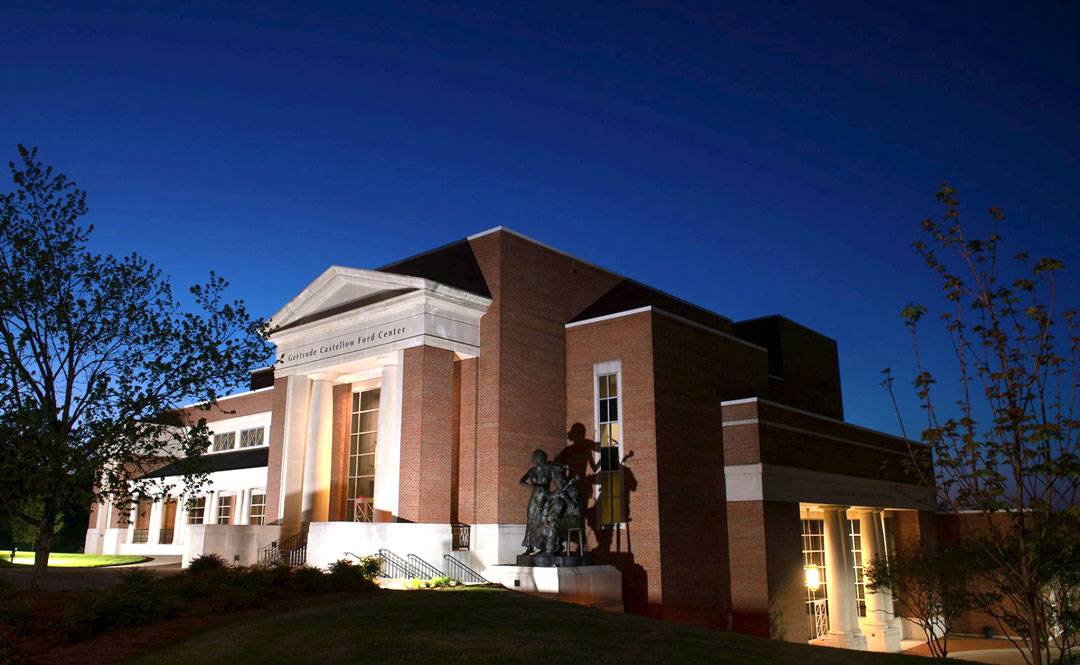 J.L. and Diane Holloway have made a gift that helps transform the Green Room at the Gertrude C. Ford Center for the Performing Arts on the University of Mississippi’s Oxford campus.

Performers visiting the University of Mississippi can soon prepare to take the stage in well-appointed style, relaxing in a newly renovated green room at the Gertrude C. Ford Center for the Performing Arts.

Where once artists waited in a spartan room surrounded by concrete-block walls, they will now enjoy an elegantly finished lounge befitting the Ole Miss experience, complete with updated dressing rooms, upgraded cabinets and appliances, new lighting and flooring, luxurious furnishings and even a gallery of sorts: walls adorned with artwork reflecting Mississippi performers.

The transformation was made possible with a $200,000 gift from Diane and J.L. Holloway of Nashville, Tennessee.

“Diane and I are always thrilled to attend events there, and we never cease to be amazed at the quality and diversity of its programs,” Holloway said. “What a gift its mission and programs are to all of us. To support something that has such impact for so many is a true honor.”

“When all the work is completed and the furniture arrives, we will plan an open house to celebrate this new look for our backstage area,” she said.

A series of events made the vision a reality: Aubrey saw a need to provide a more comfortable and inviting environment for visiting artists, which she discussed with UM Chancellor Emeritus Robert Khayat. He in turn asked alumna Diane Scruggs to formulate ideas and coordinate the project.

She brought in a designer from Summerhouse as well as Lorre Puryear-Barrett, interior designer for UM Facilities Planning, to help hone her ideas for improving the look and function of the green room and star dressing rooms. Richard Powell of Tri C Construction was hired to handle the renovations.

“But the project took off when J.L. and Diane made their gift to honor the former chancellor’s request for financial assistance to make our plans a reality,” Aubrey said.

The Holloways have enjoyed many events at the Ford Center.

“The arts at Ole Miss are a wonderful complement to the education, research and best-in-the-nation athletics that define the university,” J.L. Holloway said. “The Ford Center is a centerpiece of the university’s cultural mission. Diane and I are proud to support it, and we hope others will join us in supporting its incredible work.”

The Ford Center hosts an average of 150 events annually. Prince Edward, the King of Jordan, Janet Reno, Cornell West, James Earl Jones and Thomas Friedman are among a growing list of authors and noted intellectuals that have appeared in the Ford Center.

Among the artists who have graced its stage are Morgan Freeman, Hal Holbrook, Art Garfunkel, Marty Stuart, The Blind Boys of Alabama, B.B. King, Vince Gill and Michael Bolton.

“It seems only fitting to have these backstage spaces represent Ole Miss in a way that we can be proud of, so that every speaker and performer who graces its doorstep understands how important they are to our community,” J.L. Holloway said. “It is exciting that any entertainers who come to the Ford Center will see a fresh new look.”

“The Ford Center is such a beautiful and integral part of the University,” she said. “It adds so much to the student experience and serves as a beacon for arts and culture throughout Mississippi and beyond. Our hope is that this gift will improve the green room space so that it matches the quality, atmosphere and feeling of the rest of the building, which captivated us from the first moment we set foot inside.”

J.L. Holloway is founder of Tenax Aerospace in Madison, Mississippi, which he sold in 2018. He now runs a family investment office in Nashville.

Diane Holloway earned a degree in interior design from Ole Miss in 1985 and is the daughter of the late Jackie and Dr. R. Faser Triplett of Jackson, Mississippi, longtime dedicated supporters of the university. She is a member of the Ole Miss Women’s Council for Philanthropy board of directors and a past board member of the UM Foundation.

The Holloways’ gift to the Ford Center is the most recent of decades of support to the university, totaling more than $2 million, including a $250,000 gift made to the Women’s Council’s Global Leadership Circle earlier this year. And in 2017, the couple’s $1 million gift to Ole Miss Athletics named the south entrance of Vaught-Hemingway Stadium.

Additionally, the Dr. and Mrs. R. Faser Triplett Foundation, of which Diane Holloway is a director, recently made a $4 million gift to the Ole Miss Alumni Association, supporting the upcoming construction of a new of the Triplett Alumni Center on the Oxford campus.

In 2019, the Triplett Foundation established a $750,000 endowment for the William Magee Center for Wellness Education to support the hiring of a health-education specialist, fund the planning of a national symposium at Ole Miss and cover expenses associated with the startup. Previously, in 2017, the family’s foundation made a $1 million gift to the Campaign for Children’s of Mississippi at the University of Mississippi Medical Center in Jackson.

“My love for Ole Miss has shaped my life in so many positive ways. And that is due in part to how rich the student experience is here,” Diane Holloway said. “The arts are a critical part of that richness, and we are humbled to be a small part of the Ford Center’s ability to bring meaningful experiences right here to Oxford and act as a gathering place from which all in the community can benefit.”

To make a gift to the Gertrude C. Ford Center for the Performing Arts, click here, or for more information, contact Maura Langhart, director of annual giving, at mmwakefi@olemiss.edu or 662-915-2760.