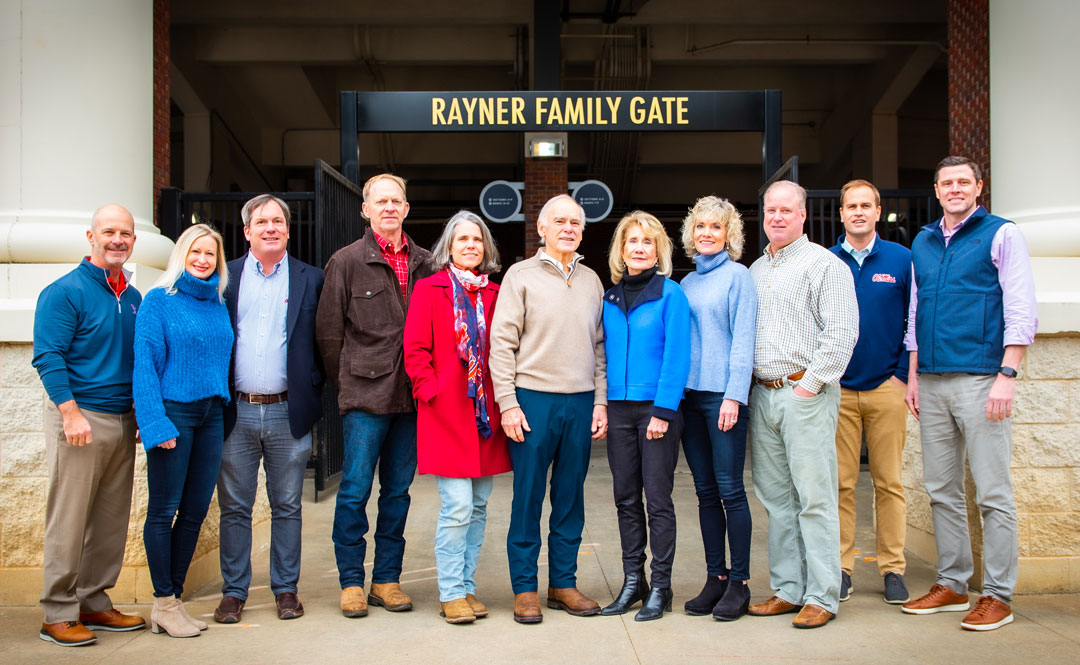 Prior to Ole Miss Baseball winning the national championship title at the NCAA College World Series in Omaha this summer, the main gate at Oxford-University Stadium/Swayze Field received a new title of its own.

Siblings Roane Rayner Grantham and Bradley Rayner and Dr. Whitney Rayner, along with their parents Mary Sharp and Dr. Jim Rayner, hope their gift will not only help Ole Miss teams remain competitive but also encourage other families to support the university.

“Going to Ole Miss sporting events is always something we’ve done as a family, so we chose to give as a family as well,” said UM alumnus Bradley Rayner, who earned a degree in business in 2000 and a second degree in management information systems in 2002. His wife, Jenny Sayle Rayner, earned a bachelor’s degree with an emphasis in psychology from the university in 1998 and a Ph.D. in 2008. The couple has two children: James and Lila.

“I hope that our gift will help provide what the athletics department needs to continue to compete at the highest levels,” he continued. “Improvement to facilities is something that the University of Mississippi has committed itself to. It has a direct impact on our current and future student-athletes and gives our coaching staffs an additional edge in the recruitment process.”

His sister shared a similar sentiment.

“Our hope for this gift is to enable student-athletes to have everything at their disposal to achieve their maximum potential which will in turn allow Ole Miss Athletics to compete at the highest level,” said Grantham, who earned a bachelor’s degree in accountancy from UM in 1990. Her husband, Robert Grantham, earned a bachelor’s degree in finance from Southern Methodist University. Nevertheless, he has been a Rebel fan since childhood when he would watch Ole Miss games with his parents and brother – all of whom attended the University of Mississippi.

The couple has two children: UM alumna Mary Morgan Grantham, who earned bachelor’s and master’s degrees in accountancy in 2020 and 2021 respectively, and Sharp Grantham, a UM freshman.

“Robert and I hope our friends who are able to give will feel compelled to do so after seeing our gift,” Grantham said.

Though her sister Whitney Rayner has degrees from Vanderbilt University and Mississippi State Veterinary Medical School, she has been a lifelong Rebel fan. She really had no choice, growing up a Rayner and then marrying into one of the most famous UM families. Her husband, Kip Crawford, is the son of the late Ole Miss student-athlete, coach and Hall of Famer Eddie Crawford — who also led the Loyalty Foundation (now OMAF) for many years and served as interim athletics director — and his late wife, ever-loyal Ole Miss fan Shirley Crawford.

“Some of my fondest memories with family and friends have been entwined with Ole Miss sporting events — the most recent of which would have to be getting the opportunity to be in Omaha to watch the baseball team capture the national title,” Whitney Rayner said.

“The Ole Miss student-athletes have always given me so much to look forward to each year and giving back to them is a priority for me,” she continued. “I love Ole Miss through the good and the bad and am always proud to be an Ole Miss Rebel!”

On behalf of the university, OMAF CEO Denson Hollis expressed gratitude for the Rayners’ gift.

“It’s difficult to think about Ole Miss Athletics and not think about the Rayner family. From attending all our games and serving on the OMAF board to donating their resources, they are incredibly generous,” Hollis said.

“The Rayners are a wonderful example of an Ole Miss family with many generations that are dedicated to supporting their university,” he continued. “So this gate is the perfect naming; it’s a prominent position for a prominent Ole Miss family.”

Their recent gift to Champions. Now. and academics is the latest of many gifts Mary Sharp and Jim Rayner have made to the university.

Dr. Rayner, who graduated from Millsaps College and the University of Mississippi Medical School, is an enthusiastic supporter of both schools; however, since moving to Oxford in 1971, he has become an avid Ole Miss sports fan. Additionally, he served on the first major UM fundraising campaign under then Chancellor Gerald Turner.

“Giving back to the university is almost like an obligation for us because of what Ole Miss has done for us,” Jim Rayner said. “We just want to help Ole Miss any way we can and want to encourage other people to do the same.”

In addition to their financial support, they have also given of their time — one or both serving on the OMAF Board of Governors as well as the boards of the UM Foundation and the Ole Miss Alumni Association.

“The more you get involved with something, the more you’re going to give of your money, your sweat, your tears,” said 1964 graduate Mary Sharp Rayner who served as president of the Ole Miss Alumni Association and as chair of the Ole Miss Women’s Council for Philanthropy.

The Rayners are proud of their son and daughters for wanting to join them in supporting the university and hope their children’s friends and neighbors will follow suit.

“So many people have moved here, and I hope they will realize it’s not just because it’s a nice place to live, but that it requires something of people who move here,” Mary Sharp Rayner said. “To me, our schools, whether the public schools or Ole Miss, deserve our support.”