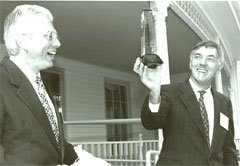 Chancellor Robert Khayat and Don L. Fruge’ recognized Brandt for his significant role in the acquisition and care of Brandt Memory House, which welcomes countless visitors to the Oxford campus through its meeting, dining, and reception areas.

Louis K. Brandt contributed the seed money for the University Foundation to purchase Memory House and its grounds, retired the mortgage after its renovation, and created an endowment for its upkeep. He also has provided critical support to the University’s academic and athletics programs for more than 20 years.

The following is a brief history of Memory House, The Foundation’s home,
via Jack Case Wilson’s book Faulkner’s, Fortunes and Flames. If you have any additional information or questions regarding Memory House, please contact UM Foundation.

“There is a unique feeling that old houses develop after surviving for more than a century. That special warmth and Southern gentility has once again been recaptured at Memory House — home of the University of Mississippi Foundation.

The first buildings on the site may have dated to 1837. The date March 10, 1837 was scratched on a brick in the old kitchen, a structure razed long ago. It was on that date that James Stockard purchased the property from the traders Chisholm, Martin and Craig, and the engraved date probably commemorated the purchase. The original dwellings were quite modest and included a small house, detached kitchen, office, and various service buildings. Stockard prospered, and, in order to benefit the growing community, he and John D. Martin each gave a half section of land on December 8, 1841, to the state of Mississippi with the stipulation that it be used as the site of a state university. This gift of land became The University of Mississippi, which formally opened its doors in 1848.

The Stockard house was sold to planter Paul B. Barringer on September 24, 1851. Barringer was a prosperous land-holder, and it was probably he who built the two story center section of Memory House. It is said that the house was typically Greek Revival with a columned portico. Barringer sold the property to another planter, Samuel Evans, on September 11, 1858, for the then enormous sum of $6,000.

Evans died on December 31, 1859, he left behind his second wife, May, their eight year old son, Robert, and an older son from his first marriage, John C. Evans. The Evans family began preparations for the spring planting of 1860, but with the spring came war and the oldest boy John enlisted. A cousin, Mrs. Rebecca Pegues, the sister of the builder of Ammadelle, kept a diary during the war. On August 20th, 1861 she wrote “Another company – the Lafayette Farmers – go off in the morning. John Evans belongs to that company.” The entry for April 30th, 1862 was a sad one. “On April 9th we had tidings of a great battle fought at Shiloh near Corinth. John Evans was killed on the battlefield.”

In 1865 came the long prayed for peace and the people of Oxford began the process of restoring their town and lives. In December, a community Christmas tree was erected at Memory House, a tree so special that it has been remembered for over one hundred years.

Mary Evans remained at Memory House until September of 1876 when she sold it to William Archibald for a thousand dollars less than her husband had paid for it in 1858. Archibald was not really interested in the old Evans house but rather in the undeveloped lots lying towards town. As soon as the purchase was finalized, he began construction of a new house on the vacant land, completing it in 1877. This house would later be known as the Skipwith House, which was demolished in 1974.

With a new house Archibald had no use for the Evans place, so he sold it in January of 1878 to John C. Richmond. After passing through several hands it was purchased by Judge Duke Kimbrough in September of 1886. It was probably Judge Kimbrough who altered the Greek revival house by removing the portico and replacing it with a Victorian veranda. The house was further altered by the addition of two small wings, and a tower like room above the veranda. After twenty-five years at the old Evans place the Kimbroughs decided that the house was too large for them, so Judge Kimbrough suggested that he and his neighbor, J. O. “Pete” Ramey trade houses. The Rameys lived next to the Kimbroughs in a house leased from the University. The Rameys bought the Kimbroughs house, and the Kimbroughs bought the remaining years of the Ramey lease.

Pete and Myrtle Harkins Ramey raised their three children Marvel, Lucille “Dolly”, and John Kimbrough Ramey in Memory House along with another child, Thelma Keys, who most thought to be one of their own. During the Depression, Memory House became a boarding house to many Ole Miss students who took their noon meal there.

After Myrtle Ramey’s death in 1940, Pete asked his daughter Lucille “Dolly” and her husband John to come live in Memory House and take care of him. John and Dolly Falkner made their home at Memory House throughout their married lives, except for brief periods, and there they raised two sons, Jimmy and Chooky. In addition to his writing ability, John Falkner was also a talented painter. He was entirely self taught, and painted in a simple, primitive style scenes that he remembered from his youth in Lafayette County.

John Falkner and John Kimbrough “Snook” Ramey bought the house from Pete Ramey in 1944. When Snook married, he and his wife Marge lived in Memory House for over a year and half until they purchased a home of their own. At that time, John Falkner bought Snook’s remaining interest in Memory House and became the sole owner.

After John Falkner’s death in 1963, Dolly kept Memory House alive opening it to the community through the annual Oxford Pilgrimage. Late in the summer of 1983 Dolly fell ill and subsequently died in September of 1984. Her body lay in state in the living room of Memory House where she had lived over 70 years of her life.

Memory House was bequeathed to the two sons of John and Dolly Falkner. Jimmy Faulkner and Chooky Falkner kept the house for about eight years, renting rooms out as apartments. On April 2, 1992, Chooky Falkner sold his half of the house to The University of Mississippi Foundation and later that year Jimmy sold his remaining half interest.

Negotiations for Memory House were deliberated by University officials for over a decade, with the final purchase contract being made by Don L. Fruge’, Vice Chancellor for University Advancement. The purchase was made possible through the vision and support of past Foundation President, Louis K. Brandt, whose generous donation enabled the Foundation to purchase the home. Both individuals along with Henry Brevard of Tupelo, Steve Owens of Oxford, Ron Guest of Oxford, and Jim Paterson of Oxford dedicated countless hours serving on the Foundation subcommittee overseeing the complete renovation project. McCarty Architects, P.A., of Tupelo, Mississippi was chosen to head the extensive renovation project which began in April 1994 and was completed in December of the same year.

True to its legacy, Memory House continues to serve as a place where people come together to celebrate. Among its many planned uses is that of a reception site to honor visiting scholars, business leaders, alumni and other University guests. The residence’s new board room and refurbished parlor will also serve as hospitable meeting areas for faculty seminars and other academically focused functions.

As Chooky Falkner says in his history of Memory House, THE HOUSE: “The house at 406 University Avenue, Oxford, Mississippi is again the queen of the area, decked out in all her regal splendor… Once again she stands supreme in all her glory… The House, with its memories, again regains in due position. Now new chapters can be added to the continuing story of Memory House.” – Wilson, Jack Case, Faulkners, Fortunes and Flames,
Annandale Press, Nashville 1985, p82-85.