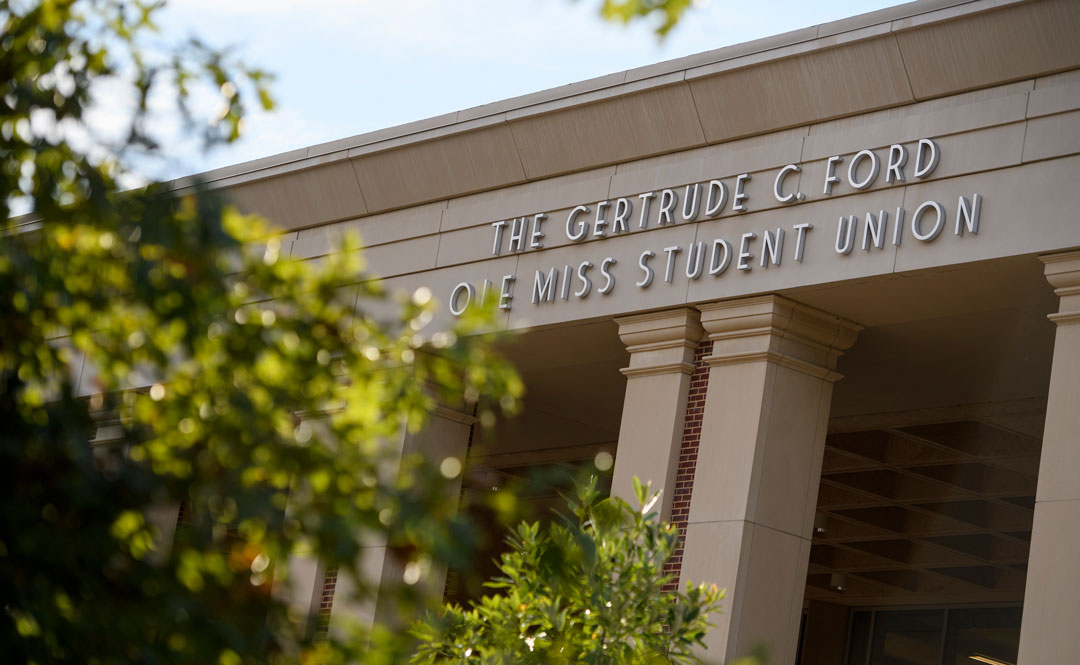 The Ole Miss Student Union’s name was dedicated to the late Gertrude C. Ford on Friday, Aug. 26, at 10 a.m. The Gertrude C. Ford Foundation of Jackson, Mississippi, continues to be a strong supporter of the university’s Oxford and Medical Center campuses, providing some $67.8 million in gifts.

The University of Mississippi formally dedicated the new name of the Ole Miss Student Union Friday, Aug. 26, paying tribute to late Gertrude C. Ford and her foundation that continues to have a transformative impact on the Oxford and Medical Center campuses.

The ceremony took place on the second floor of the Gertrude C. Ford Ole Miss Student Union near the Grove entrance. A dinner that evening was hosted by the Gertrude C. Ford Center for the Performing Arts to present the inaugural Concerto Award to the Ford Foundation and Chancellor Emeritus Robert C. Khayat.

Those speaking at the dedication included UM Chancellor Glenn Boyce; Stephen Sims of Jackson, Mississippi, president of the Gertrude C. Ford Foundation; and Bradley Baker, director of the Student Union.

“The naming of The Gertrude C. Ford Ole Miss Student Union honors the incredible generosity of the Gertrude C. Ford Foundation which has provided significant investments in many important projects on our main and Medical Center campuses,” said Chancellor Boyce. “The Ford Foundation board members have demonstrated an outstanding commitment to helping meet the needs of our university, with the overarching mission of making a meaningful impact throughout our state, region and far beyond.

“We enjoyed honoring the Ford Foundation board members and thanking them publicly for their enduring support which now totals more than $67.8 million.”

Built in the mid-1970s, the Gertrude C. Ford Ole Miss Student Union experienced a major expansion and renovation project that began in 2015 and opened with the 2019 fall semester. More than 173,000 square feet were added to the facility, including an 8,000-square-foot ballroom. Larger lobbies and dining spaces, as well as increased conference meeting spaces were needed to better serve the growing student population with a more modern and engaging hub of student life.

“The Student Union is the center of campus, so I think this naming is fantastic,” said Sims. “Students are in it all the time, and the ballroom is impressive. It’s so much more than anything we’ve ever had before. I’m extremely pleased it’s being named for Mrs. Ford, who valued anything that helped education and young people.”

Julia Aubrey, executive director of the Ford Center for the Performing Arts, said the Concerto Award comes during the Ford Center’s 20th anniversary year to thank individuals who have supported the center from the beginning with their “guidance, energy and treasure” to assure that the center’s mission to serve the university and the community at large is maintained. Renowned pianist Bruce Levingston, the Chancellor’s Artist-in-Residence of UM’s Sally McDonnell Barksdale Honors College, performed at the recognition dinner.

“First there is a vision, then one must have the means to bring that vision into existence. That is where the Gertrude C. Ford Foundation enters the picture,” Aubrey said.

“This performing arts center was the first project funded by the Ford Foundation when it was established in 1998. Since its inception, the Ford Foundation has donated over $100 million to a large and diverse number of organizations in the state. More than half of that total has been gifted to our university for the performing arts center, our new STEM facility, the Student Union and much more. Gertrude C. Ford’s name and legacy is well-represented on this campus,” said Aubrey.

It was Khayat’s vision to build a performing arts facility on the Oxford campus during his tenure as chancellor, and thus he also received a Concerto Award.

“His commitment has extended beyond his time as chancellor as he remains a dedicated advocate for the Gertrude C. Ford Center for the Performing Arts,” Aubrey said. “Robert was instrumental in fundraising for our first capital campaign in 2018 and has encouraged alumni and friends to provide gifts to continue our mission. Most recently he secured a $200,000 gift from Diane and J.L. Holloway to renovate our green room and star dressing rooms. Robert gets people involved!”

The Ford Foundation’s investments have strengthened the university in numerous areas. Most recently, its $2.5 million gift to the Campaign for Children’s of Mississippi pushed the campaign over its $100 million goal to $101.5 million. The philanthropic drive helped pay for a multi-story expansion of the state’s only children’s hospital that doubled the square footage devoted to pediatric care at the Medical Center.

The Ford Foundation committed $25 million to the Jim and Thomas Duff Center for Science and Technology Innovation, which is a science, technology, engineering and mathematics academic building currently under construction in the Science District.

Ford Way, a major artery through the Science District running through the section of campus between University Avenue and All American Drive, will be named for the Ford Foundation. In addition to being the location for the STEM building, it will be the site of a commemorative area created to honor Nobel Prize-winning author William Faulkner and the activities he performed in that part of campus. As a result, this pathway will bring together science and Faulkner’s literary works in a way that honors their connection to the liberal arts.

A new $200,000 gift from the Ford Foundation has been committed to the Patterson School of Accountancy’s building fund, and the Career Center in the building will be named to honor the gift. The foundation also gave $400,000 to support the MPower Extended Orientation Program for incoming freshmen, which provides leadership development at the individual, team and community level.

The Ford Foundation contributed $25 million for the 88,000-square-foot Gertrude C. Ford Center for the Performing Arts, opened in 2002. Gifts to several other university initiatives, such as the Gertrude C. Ford Ballroom in The Inn at Ole Miss, the Daniel W. Jones, M.D. Chair for Faculty Support on the Oxford campus, the Suzan Thames Chair of Pediatrics and the MIND Center research clinic on the UM Medical Center campus, and land for Gertrude C. Ford Boulevard, providing a new north-south thoroughfare for the ever-growing Oxford-University community have been provided.

Gertrude C. Ford was raised in a generations-old tradition of philanthropy, which began more than 150 years ago with a $25 donation from her family to the Andrew Female College Building Fund in Randolph County, Georgia. Mrs. Ford established the Gertrude C. Ford Foundation in Jackson with a very generous gift in 1991. Mrs. Ford died in September 1996. She and her husband, Aaron Lane Ford, an Ackerman attorney and U.S. congressman representing what was then Mississippi’s Fourth District, are buried in Cuthbert, a small town in southwest Georgia.