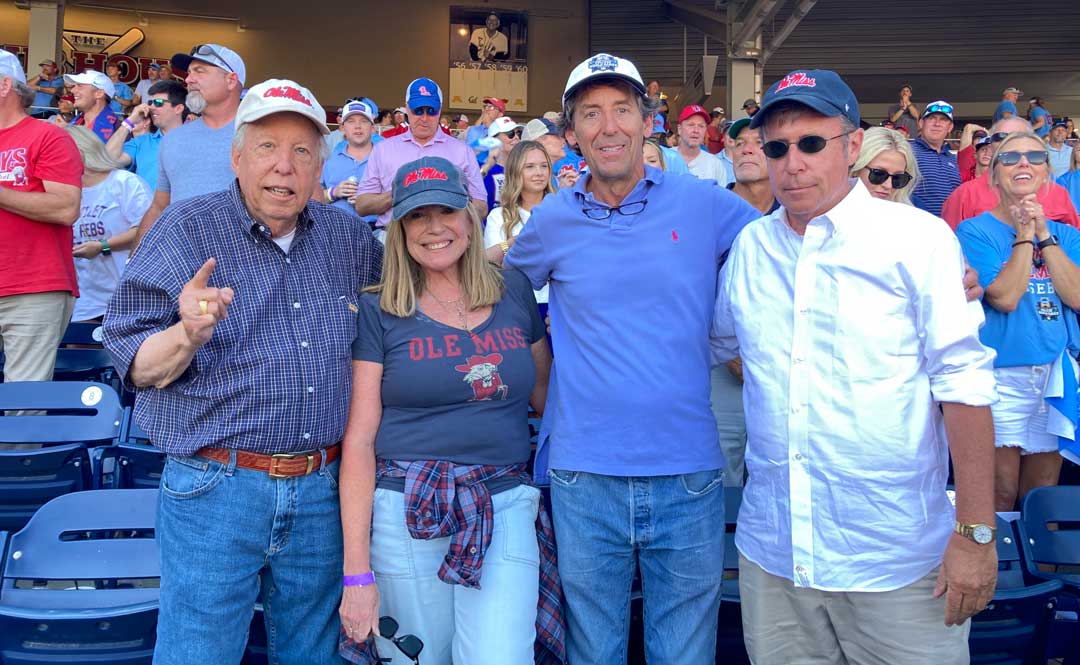 From left, Joe Macione, Kimberly Macione Butler and her husband, John, and Kyle Macione cheer the Rebels to a national championship at this year's College World Series.

Joe Macione of Bristol, Tennessee, and his family have prospered because his accounting degree from the University of Mississippi gave him the tools necessary to have a successful career. Recently, he decided it was time to help others have the same opportunity for prosperity.

“My wife, Annette, always reminds me that you share your worldly possessions with those who feed you. I consider my accounting degree something that fed me well through the years,” Macione said, adding that accounting also had great benefit for two subsequent generations of Maciones.

Joe Macione’s appreciation for his foundation in the profession led him to make a $100,000 gift to the Patterson School of Accountancy Building Fund.

“We are grateful for his generous support of our building project. Our new building will be located on prime university real estate and will help us tremendously in recruiting top talent to the Patterson School. It is wonderful to have three generations of the Macione family supporting the Patterson School of Accountancy,” said Accountancy Dean Mark Wilder. “The new building will elevate our already renowned accounting program to greater heights.”

Jason McCormick, director of development for the school, is enthusiastic about one of the principal goals of the building fund.

“We want to be the very best program in the country. We believe the new building will give us an opportunity to reach this goal.”

“Our reputation for producing great students means employers nationwide seek out our students for internships and our graduates for full-time jobs. We currently teach accountancy classes all over campus and look forward to the sense of community we will have with the new building and all our classes under one roof once again,” Wilder said.

In 2021, UM granted a record number of accounting degrees — 588 — with 253 of those being master’s degrees. Over the three-year period from 2020 to 2021, eight Patterson School students earned the prestigious Elijah Watts Sells Award, the most prestigious CPA-exam award worldwide. This ranks the Patterson School No. 1 in the SEC and tied for No. 4 nationally in numbers of Sells awardees over the past three years.

The building fund will provide for a new four-story building that will offer study spaces, faculty offices and outdoor space in addition to new tiered auditoriums and advanced classrooms for the in-demand program. The 110,000-square-foot building will overlook the landmark Grove from the corner of University Avenue and Grove Loop.

“The Macione family is an example of how an Ole Miss accountancy education can change the trajectory of a family for generations,” McCormick said.

“Joe understands that power and wants to share it with future students and generations to come. He is leaving a legacy — not just for his family — that will allow many others to prosper.”

Macione grew up in the Mississippi Delta town of Arcola, with a total of 100 students in all 12 grades. He was the only member of his graduating class to attend college. He got his first taste of higher education and accounting watching his father, who did not have a college degree, make a career switch by taking bookkeeping correspondence courses.

After high school, he enrolled at Ole Miss, unsure of what his major would be. He liked working with numbers and was good at it, so he became a business major with a focus on accounting.

After earning his degree, Macione moved to Jackson, Mississippi, to be close to Annette, his soon-to-be-bride. He began working at a small firm with one key client. That client left, and Macione was without a job. He walked a few blocks to the largest firm in town and asked for a job. He was hired on the spot.

Three years later, he launched his own firm in Leland, Mississippi. Twice, his firm merged with others and ultimately moved to Greenville, Mississippi, where it continues to operate. His partners, Ben B. Sayle and Virgil “Brother” Sandifer were key to the firm’s survival and growth.

Over the years, Joe Macione took on roles in the firm and with clients as needed. He went on to helm several TV stations, including WCYB in Bristol. The station became known as the best-performing station in mid-sized markets, even being recognized by the Tennessee Legislature.

Macione also served as the chair of the Washington County Ole Miss Alumni Association, and served on the National Ole Miss Alumni Board and the Accountancy Advisory Board.

When it came time to make the gift to the Accountancy Building Fund, Macione knew it had to be a family gift. He also wanted the partners who helped him build his firm – Sayle and Sandifer – to support the campaign and the school’s vision.

“I was thrilled they were willing to support this project in such a meaningful way,” Macione said.

“Our program impacts lives well beyond our students, graduates and faculty,” Wilder said. “Our alumni go on to have wonderful careers working in public accounting firms, at businesses large and small, in nonprofit organizations, and governmental entities.”

Macione knows the impact of a UM accountancy degree.

“My Ole Miss degree has been good to us — it has allowed us to prosper. It gave my children and me a leg up and we’re hoping it will do the same for the grandchildren.”

The Maciones also love Ole Miss Athletics. Joe, with Kyle, Kimberly and her husband Dr. John Butler were among many who witnessed the Rebels win the 2022 College World Series Championship.

The Patterson School support from the Maciones, Sayles and Sandifers will go toward Now & Ever: The Campaign for Ole Miss, a historic fundraising initiative to secure $1.5 billion in private gifts to strengthen the university for generations to come.