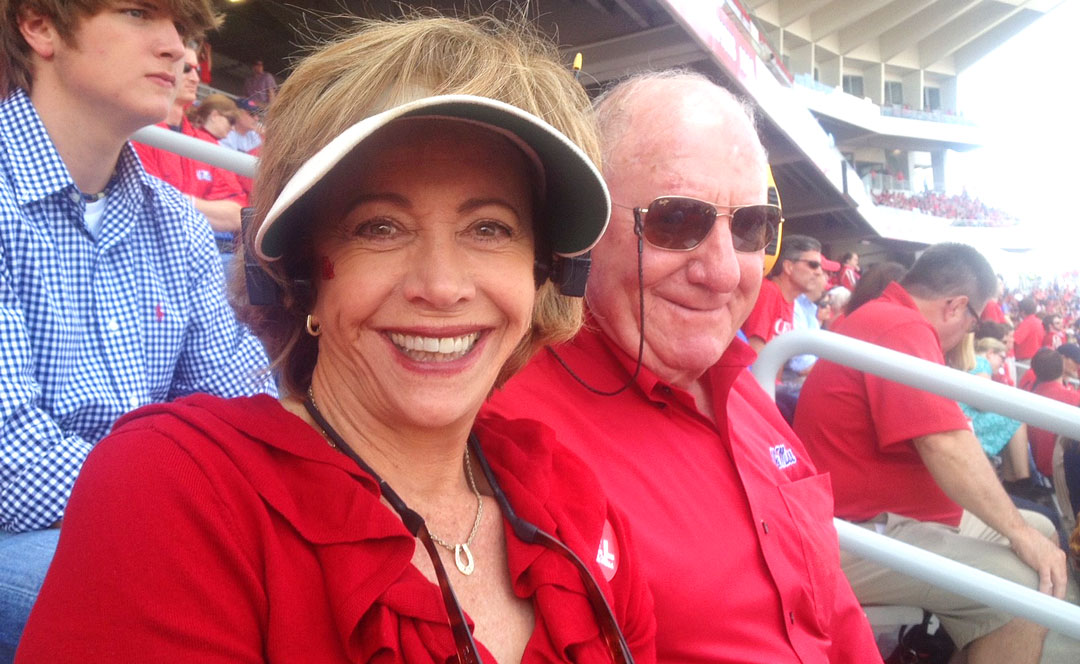 The legacies of the late Melinda and Albert Gamot, trial attorneys whose firm was in Palm Beach Gardens, Florida, are being expanded through the Gamot Oral Advocacy Endowment benefiting the University of Mississippi School of Law. Annual interest from the endowment will support the Moot Court Board teams. The couple traveled back to Ole Miss for a football game each year and to see friends.

Two Florida trial lawyers who were passionate about their work will be remembered through the Gamot Oral Advocacy Endowment at the University of Mississippi School of Law.

An estate gift of almost $79,000 from the late Melinda Gamot, wife of the late Albert Gamot, created the endowment to support the Moot Court Board teams in the law school and represent the couple’s values and love of Ole Miss.

“They both strived for professionalism, integrity, ethical behavior and good trial work. I believe that’s a perfect place for the resources to go because the students will learn to love trial work,” said attorney Nicole Gamot of her father and stepmother, with whom she practiced law.

“They were wonderful human beings and great lawyers,” said Gamot, a resident of Palm Beach Gardens, Florida. “They always practiced making sure they had respect for the court and for their opposition. When cases are over, you still have to be a part of the legal community and so you should always strive to have a good relationship with opposing counsel.”

Susan Duncan, dean of the law school, said, “Our advocacy boards provide such a fantastic opportunity for students to practice arguing on behalf of clients. We are so grateful to the Gamot family for their generous gift, which will directly help future students learn valuable advocacy skills through our championship-winning boards. The Gamot family legacy will live on through this program.”

“My dad grew up in the rural, farming community of Pahokee in western Palm Beach County, Florida,” said Gamot. “There was a family doctor there who had gone to undergraduate and medical school at the University of Mississippi. He was very instrumental in my dad’s life, and he said, ‘Albert, I think you should go to Ole Miss. You will love it.’”

And Albert Gamot came and did, indeed, love it.

“My dad had so many good memories. He loved his friends, he was in a fraternity, and he went to every game. He was there during the days of legendary quarterback Archie Manning, so Dad was a huge football fan and had a wonderful time. My dad said it was the most beautiful campus in the world, and he would return once a year for a game and to see friends.”

Albert Gamot first became an insurance agent after his Ole Miss graduation and attended an academy each year for in-depth training on insurance contracts. After several years selling insurance, Gamot said her dad decided, “’I’m really good at this contract business. I may want to be a lawyer.’

“And he jumped right in. It was a big trip because we lived in that small community, and we drove all the way to Ole Miss for law school. After arriving, I attended a private kindergarten and the following year, first grade at Bramlett Elementary. I just love the community. It’s very dear to my heart,” said Nicole Gamot.

“They were incredible attorneys with different styles. My dad was the consummate Southern gentleman, easy-going but a tenacious trial lawyer. He specialized in real estate and wills and trusts. With a vast network of friends and acquaintances, he developed a number of commercial and residential projects. He was acquainted with so many people in South Florida he seemed to know someone everywhere he went. He never lost sight of his roots and those he met along the way,” Nicole Gamot said.

“On the other hand, Melinda was wickedly sharp, straight to the point. She knew the law, easily grasping its meaning and intent, making her well known and widely respected in the legal community. She was an absolutely amazing trial lawyer.”

Albert and Melinda Gamot were staunch believers in the American Rule of Law and career-long supporters of the Legal Aid Society. Nicole Gamot said their perspective is best described by the writing of the Honorable Justice Hugo Black in the landmark case Gideon v. Wainwright, 372 U.S. 335 (1963), “From the very beginning, our state and national constitutions and laws have laid great emphasis on procedural and substantive safeguards designed to assure fair trials before impartial tribunals in which every defendant stands equal before the law. This noble ideal cannot be realized if the poor man charged with crime has to face his accusers without a lawyer to assist him.”

When asked what advice she thought the Gamots would give to Ole Miss law students, Nicole Gamot said, “Never give up on your dream. Be the best you can be. Strive for ethical behavior and professionalism, and if you do that, you’re going to be a happy lawyer.”

In addition to practicing law, the Gamots possessed a love and affinity for animals, particularly horses for Melinda Gamot. In April 1999, they took a giant leap toward bringing a dream to fruition — purchasing the first of four parcels of land on which to build their ranch, the 2 Bar G. Over 22 years, with some professional assistance, they created an 800-plus-acre working ranch paradise.

The Gamots also traveled the world, checking off places on their bucket list. But they always made a priority of returning to Ole Miss each year.

“Our whole family made the trip many times,” said Nicole Gamot. “Melinda thought the Florida Gator tailgate was the end all and be all, but then she went to Ole Miss and said tailgating was a different world. Melinda taught at the Ole Miss Law School several years back while vacationing there and absolutely loved it.”

The Gamot Oral Advocacy Endowment is open to gifts from organizations and individuals. Send a check with the fund noted in the memo line to the University of Mississippi Foundation, 406 University Ave., Oxford MS 38655 or give online at https://give.olemiss.edu.

For more information on how to support the UM School of Law, contact Suzette Matthews, senior director of development, at suzette@olemiss.edu or 662-915-1122.