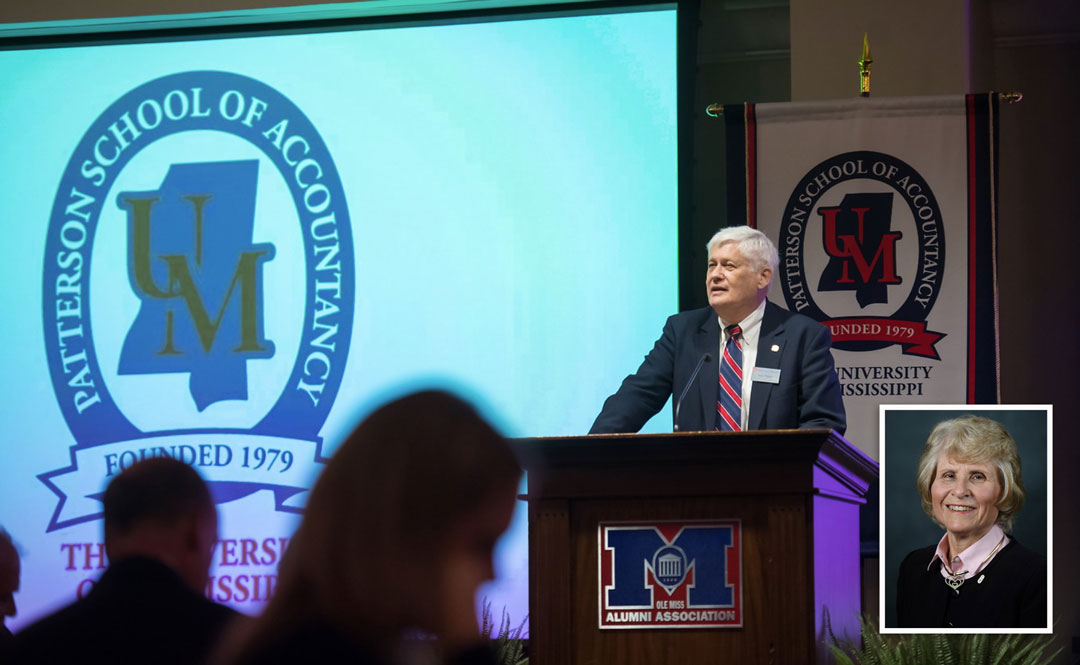 Tonya and Dale Flesher have each devoted 45-year careers to the Patterson School of Accountancy at the University of Mississippi and now they are supporting construction of the school’s new home.

The award-winning researchers and teachers have committed $300,000 to the renowned program they helped build. The executive boardroom in the 100,000-square-foot building at the corner of University Avenue and Grove Loop will be named in honor of the Fleshers who are 2020 inductees into the School of Accountancy’s Hall of Fame.

Tonya Flesher, the former dean of the school, feels that the new home for the Patterson School of Accountancy is a milestone in the school’s history. “This prime location will shine a spotlight on the prominence that the school has achieved and will highlight its separate status,” she said.

“The University of Mississippi has been our bedrock in the world of academic research and teaching,” said Dale Flesher, holder of the Roland and Sheryl Burns Chair of Accountancy. “Ole Miss and the School of Accountancy have been our lives and we are now in a position to give back.

“The university hired us, which later enabled Tonya to become the first woman academic dean in the university’s then 140-year history. Being able to share my career with Tonya has been a continuing highlight in my personal life,” he said.

Dale Flesher has authored 52 books in 98 editions and over 400 articles for more than 100 different professional journals throughout the world. Among his extensive awards and professional memberships, the American Institute of CPAs (AICPA) honored him in 2011 with its Distinguished Achievement in Accounting Education Award — an honor Tonya Flesher also received in 2020, making Ole Miss one of only four schools in the nation to have multiple winners. The university presented Dale Flesher its highest research award, the Distinguished Research and Creative Achievement Award in 2011 and the Burlington Northern Faculty Achievement Award in 1987.

Dale Flesher was honored in 2017 with the Southeastern Conference (SEC) Faculty Achievement Award as the top faculty member. Never had an accounting professor from any university won the award, nor anyone from any other business discipline. The American Accounting Association named him Outstanding Educator in the Southeast Region. He also served as international president of the Academy of Accounting Historians.

Tonya Flesher is professor emerita of accountancy and Arthur Andersen Lecturer. She was presented the university-wide Elsie M. Hood Outstanding Teacher Award in 2003 and the Burlington Northern Faculty Achievement Award in 1986. Among other honors, the AICPA awarded her the Sustained Contribution Award in 2012.

She has authored eight books and more than 100 articles. For over 25 years, she was the editor of two tax textbooks, one of which was the most widely used tax textbook in the country. In giving back to her profession, Tonya Flesher served as the international president of the Academy of Accounting Historians and was a member of several national organizations.

“Working with the students, faculty, staff and alumni made my job the best anyone could imagine,” Tonya Flesher said. “In appreciation of a long and satisfying career, I want to pay back for what was given to me. I have such pride in the success of the Patterson School of Accountancy and desire that it continue and be properly recognized.”

Accountancy Dean Mark Wilder praised the Fleshers for their gift and many contributions to the school.

“The Fleshers are part of the school’s longtime tradition of nurturing relationships with students and alumni, and their gift will expand their legacies. We appreciate so much their generous gift and look forward to honoring them with the naming of this prominent area,” he said.

“Tonya and Dale Flesher have dedicated their lives to the University and Patterson School of Accountancy. For more than four decades both Tonya and Dale have had a positive impact on literally thousands of Ole Miss accountancy students and alumni. They have each played a key role in the many successes that the Patterson School enjoys today,” Wilder said.

The Patterson School of Accountancy is a powerhouse, ranked No. 8 in the country and No. 1 in the Southeastern Conference, marking the 10th consecutive year of top 10 rankings. In 2021, the school awarded a record 588 degrees with 253 being master’s degrees. Over the past three years, the school has a total of eight recipients of the Elijah Watts Sells Award — the most prestigious CPA exam distinction world-wide. Over the 2020-2022 time-period, this ranks Ole Miss easily No. 1 in the SEC in number of Sells Award recipients and tied for fourth nationally.

The growth in student enrollment is driving plans for the new academic home with a cost of $70 million-plus. The four-story facility will feature tiered auditoriums and classrooms, study areas, conference rooms, administrative and faculty office suites, and outdoor balconies and terraces.

The Fleshers noted that a new building is badly needed. Dale Flesher stated, “We have long outgrown Conner Hall.  For example, I have taught in at least 17 different buildings on the Ole Miss campus, simply because there was insufficient space for all accounting classes in Conner Hall.”

The Fleshers attribute the success of the Patterson School of Accountancy to its respected faculty — many of whom have won multiple teaching awards — and successful graduates, its status as a stand-alone accountancy program and the most extensive accountancy library in the world.

“The Ole Miss Accountancy faculty has provided Mississippi and the nation with leaders in nearly every field,” said Dale Flesher. “Graduates have gone on to serve as leaders in international accounting firms, as chief executives in Fortune 500 companies, as heads of governmental and non-profit agencies and as owners of small businesses in towns throughout the Mid-South.”

Equally as important was the separation of the Accountancy School from the School of Business Administration in 1979, as recommended by the AICPA.

“This independence allowed the school to be more closely aligned with the accounting profession, to raise more funds, to hire quality faculty and to develop an enriched curriculum. It has meant so much to witness the growth of the reputation and prestige of the Patterson School,” Tonya Flesher said.

The next significant event came in 2001 when the AICPA donated its 129,000-volume library to the university and named the school home to the National Library of the Accounting Profession.

The Fleshers’ support will go toward Now & Ever: The Campaign for Ole Miss, a historic fundraising initiative to secure $1.5 billion in private gifts to strengthen the university for generations to come. Their legacy of providing private support began in 1982, and they have made gifts to a wealth of campus areas. They have provided major funding to the Tonya and Dale Flesher Scholarship Endowment in Accountancy.