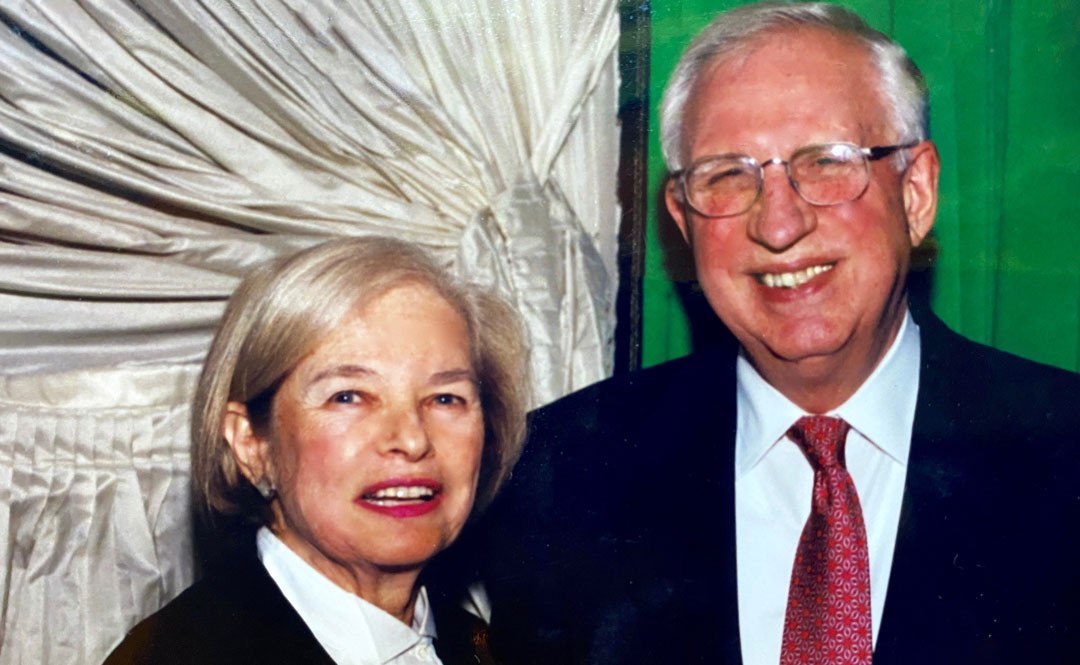 To date, the James and Madeleine McMullan Family Foundation has provided over $1.25 million in scholarships, including those to graduating seniors in Newton and Pass Christian, Mississippi.

In her lifetime, the late Madeleine McMullan’s philanthropy and service improved the lives of countless people. Now, her family’s foundation continues her legacy with recent gifts totaling $500,000 to the University of Mississippi’s Foundations for Academic Success Track (FASTrack) program.

This is the latest among 30 years’ worth of gifts made to the university by McMullan and her late husband, Jim McMullan — a 1956 UM graduate — and the James and Madeleine McMullan Family Foundation, which was established in 1987 and is now managed by the couple’s daughters Carlette McMullan of Lake Forest, Illinois, and Margaret McMullan of Pass Christian, Mississippi. To date, the family’s foundation has provided over $1.25 million in scholarships.

“The University of Mississippi is incredibly grateful for the steadfast support of Madeleine, her late husband, Jim, and the entire McMullan family,” Chancellor Glenn Boyce said. “They have provided us with extraordinary resources that benefit our students and strengthen our academic programs. Their generous commitments are an essential part of how our standard of sustained excellence moves higher and higher.”

The sisters overseeing their family’s foundation say they incorporate their parents’ primary philanthropic concerns and goals into every decision they make.

“Our parents were both keen on education, community work, health care and organizations that help the underserved,” Margaret McMullan said. “My sister and I always consider them when we make foundation decisions. We are so proud of the faculty, staff and students at the University of Mississippi for sharing our parents’ vision.”

“Our Mississippi-born and raised father was deeply interested in and passionate about Southern history and supporting research and learning,” Carlette McMullan said. “Our parents’ shared passion for helping those less fortunate and their confidence in the benefits of education, inspired much of their philanthropy. Margaret and I are blessed to be guided by their vision.

“We are excited to continue our family foundation’s partnership with the University of Mississippi and the FASTrack initiative.”

The McMullans’ gifts supplied additional resources to funds established by the family in 2016: the Fund for Student Success, which supports the academic mentor position in the FASTrack program, and the Fund for Student Leadership, which underwrites new student leadership positions and/or peer mentors for FASTrack participants.

Trynica Wash of Newton, Mississippi, one of the most recent McMullan Scholars, said the McMullan family made it possible for her to achieve her dream of attending college.

“Because of the opportunities they have given me, I continue to be motivated to work hard and get the best grades possible so I can graduate as a member of the Class of 2023,” Wash said. “Their contributions to scholarships and FASTrack are helping so many students succeed.”

Suzanne Wilkin, an academic mentor and interim director for the program, said she feels honored to be involved in student success.

“Thanks to Madeleine and her daughters, I have the privilege of working with students every day and watching them blossom,” she said. “Because of this family’s generous support, FASTrack students have the opportunity to be introduced to new experiences and gain the confidence to be leaders in our campus community and beyond.”

“Madeleine McMullan was quite simply the center’s guardian angel,” he said, recalling an initial meeting with the couple. “Jim said he and Madeleine wanted to support our programs on the American South, and they had considered endowing a professorship with $500,000. We were speechless. Then, with a twinkle in her eye, Madeleine said, ‘Jim, don’t beat around the bush. Round it off to a million dollars.’”

The James M. and Madeleine M. McMullan Faculty Endowment, the McMullans’ first major gift to the Center for the Study of Southern Culture, funded the hiring of two new professors who were joint appointments in literature and anthropology.

“We became friends over the years and Madeleine never failed to ask me what I was working on or how my classes were going,” said McKee, who credits the McMullans for her career on campus. “Madeleine enjoyed talking about ideas, music, art, history and literature. Her own keen intellect modeled exactly what we strive for in interdisciplinary study — a sense that all things are interconnected and better understood as pieces of a larger puzzle. I am proud to have her name attached to my position.”

“I am forever grateful to the McMullan family for enabling my dreams to become a reality by making a professorship in both Southern studies and anthropology — a unique combination,” Delerme said. “I chose to join UM in 2013 because I could work at a center that focuses on the history and culture of the South. The family created an opportunity where academics like me can document and analyze the changing American South, share our love of Southern culture with our students and address inequalities so we can work toward positive changes through community-engaged research.”

Over the years, the McMullans hosted the center’s faculty and students at their home. Today, their daughters continue to support the center through the family’s foundation.

Additionally, the McMullans’ longtime support of the university includes the Hardin Future of the South Endowment, Friends of the Library, Thelma Boozer McMullan Memorial Library Endowment, Ann Abadie Fund for the Oxford Conference for the Book and scholarships on the Oxford campus, as well as the Dr. Guy Gillespie Jr. Endowment on the University of Mississippi Medical Center campus in Jackson.

“Madeleine and Jim’s philanthropy has opened doors for so many people, including me,” said Bruce Ware, one of the first McMullan Scholars. Ware is now a board member of both the UM Foundation and the Alumni Association. He is a corporate vice president with DaVita Inc., a Denver-based Fortune 500 health care company, and on the boards of Blackhawk Bank in Beloit, Wisconsin, and AAON, Inc. of Tulsa, Oklahoma.

As a freshman at UM, Ware reached out to Jim McMullan, who hired him to intern at William Blair and Co. Ware credits interning under McMullan as a defining moment. It set the stage for him to start his career on Wall Street upon graduating from UM and subsequently earning an MBA from Harvard Business School and a master’s degree from the University of Texas at Austin.

“They not only gave generously of their financial resources, but they also gave of their time, wisdom and kindness,” he said. “Just look at the magical things that have happened in the lives of young people from Newton, like Trynica, who was recently inducted into Mortar Board and is on track to graduate with honors because of Madeleine and her family.”

With the McMullans in mind, a few years ago, Ware and his wife, Rhondalynne, established the Annette Ware Fund, which supports students from Newton considering enrolling at UM by providing them with the resources to visit campus. This fund also helps the FASTrack program, the McLean Institute for Public Service and Community Engagement and the Department of African American Studies.

“The memory of my dear friends and mentors, Madeleine and Jim McMullan, continues to inspire me. We are investing in the educational opportunities of current and future UM students because the McMullans invested in me and so many other young people in Mississippi,” Ware said.

“Rhondalynne and I believe that philanthropy begets philanthropy. So we are doing our best to give to others the way we observed and experienced the impact of Madeleine and Jim’s transformational giving.”

To learn more about supporting the FASTrack program, click here.

For more information about the Center for the Study of Southern Culture, click here.

To make a gift, contact Nikki Neely Davis at nlneely@olemiss.edu or 662-915-6678 or visit https://nowandever.olemiss.edu.