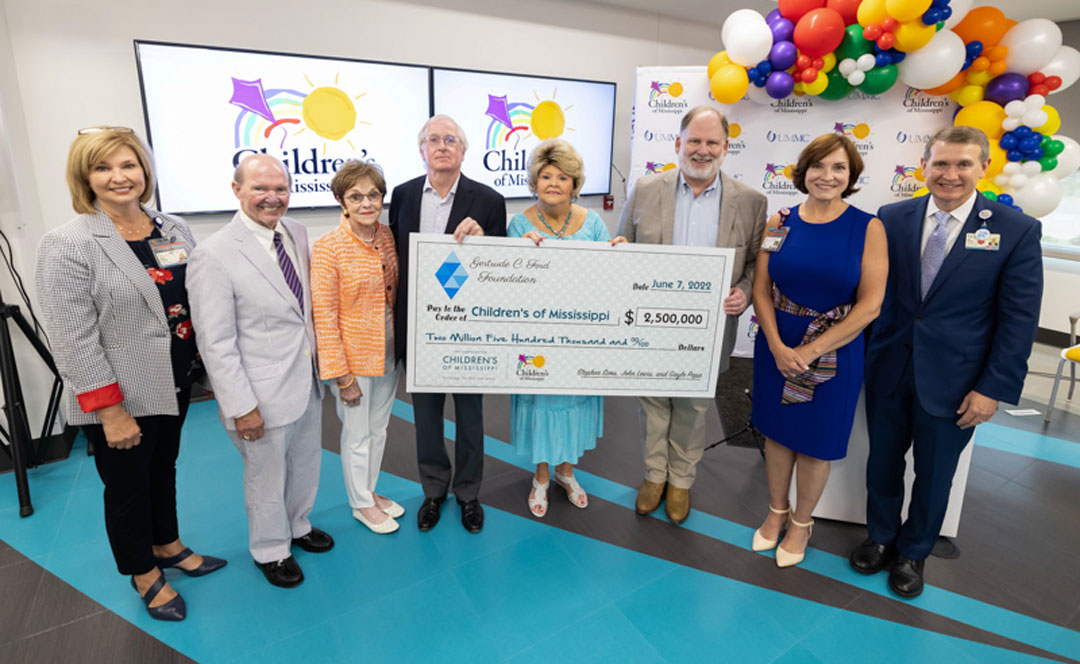 The philanthropic drive to help pay for a multi-story expansion of the state’s only children’s hospital not only met but surpassed its $100 million goal thanks in large part to a $2.5 million gift from the Gertrude C. Ford Foundation.

The Campaign for Children’s of Mississippi has now raised $101.5 million.

The Campaign for Children’s of Mississippi was launched in 2016 by former Sanderson Farms board chairman and CEO Joe Sanderson and his wife, Kathy, with a $10 million personal donation, and has set a record for capital campaign fundraising at the University of Mississippi Medical Center. The funds raised allowed for the construction of a state-of-the-art facility that doubled the square footage devoted to pediatric care at the Medical Center.

“This has been the dream of so many people for so long,” said Dr. LouAnn Woodward, vice chancellor for health affairs at the University of Mississippi Medical Center and dean of the School of Medicine. “The Campaign for Children’s of Mississippi had an audacious goal – $100 million – but when Kathy and Joe Sanderson took the lead, I had no doubt the goal would be reached. We are in this incredible new children’s hospital tower because of the love for children and families that the Sandersons share with Mississippians from all walks of life.”

Inside the Sanderson Tower, a dozen surgical suites accommodate procedures from rare to routine. Two floors of outpatient clinics make follow-up care more convenient, and the Sanderson Tower has a dedicated parking garage and covered walkway next door. This walkway and pavilion are named for the Gertrude C. Ford Foundation in recognition of its generosity.

Since the Sanderson Tower’s opening on Nov. 2, 2020, more than 13,090 surgeries have been performed. Inside the 88 private neonatal intensive care rooms, more than 1,511 babies started their lives. Over 1,604 children received critical care in the 32 private pediatric intensive care rooms. More than 63,635 specialty clinic visits have kept patients healthy, and more than 100,893 X-rays, CT scans, ultrasounds and MRIs were performed in the child-friendly Pediatric Imaging Center inside the tower.

“The impact the Sanderson Tower has had in the care of Mississippi’s ill and injured children cannot be overstated,” said Dr. Mary Taylor, Suzan B. Thames Chair and professor of pediatrics. “We now have a hospital that matches the world-class skills of our pediatric health care team.”

Seeing children and families getting the care they need inside the Sanderson Tower has been the experience of a lifetime, said Joe F. Sanderson, former CEO and board chairman of Sanderson Farms and, with wife Kathy, chairs of the Campaign for Children’s of Mississippi.

“Kathy and I knew the needs of the children’s hospital were great, but the goal of $100 million seemed lofty,” Joe F. Sanderson said. “Launching the Campaign for Children’s of Mississippi was a leap of faith – faith in the divine, and faith in the generosity of Mississippians. That we’ve not only reached this goal but surpassed it shows Mississippians’ dedication to their children and their families.”

The Gertrude C. Ford Foundation, Sanderson said, helped push the campaign over its goal. “Once again, the Ford Foundation has helped make Mississippi a better place to call home. We are thankful for the foundation’s philanthropy and vision.”

Kathy Sanderson said she and her husband, along with the campaign’s steering committee, are grateful to all who made donations of all amounts. “Each gift to the Campaign for Children’s of Mississippi was a gift from the heart.”

Stephen Sims, director of the Gertrude C. Ford Foundation, praised the Sandersons and former New York Giants quarterback Eli Manning and his wife Abby, honorary chairs of the campaign, for their leadership.

“It is an honor for our foundation to play a small part in their campaign to support the children’s hospital, which is a godsend not only for our Mississippi children but for children across the southeast,” he said. “The results of this campaign will touch lives for many years to come.”

For Nolee Jones, the state’s 2022 Children’s Miracle Network Hospitals Champion, the Sanderson Tower is where she sees the cardiologists who keep her healthy. The family business, Bates Inflatables, has shown support for the campaign by raising $1,000 in Nolee’s honor.

The 9-year-old from Pearl was born with a congenital heart condition that was repaired during her infancy by surgeons at Children’s of Mississippi. She visits the Children’s Heart Center for outpatient check-ups.

“We are so thankful that Nolee can get the care she needs here in Mississippi,” said Nolee’s mother, Chelsea Bates. “The Sanderson Tower has the advanced spaces and equipment that she and other patients need to stay healthy.”