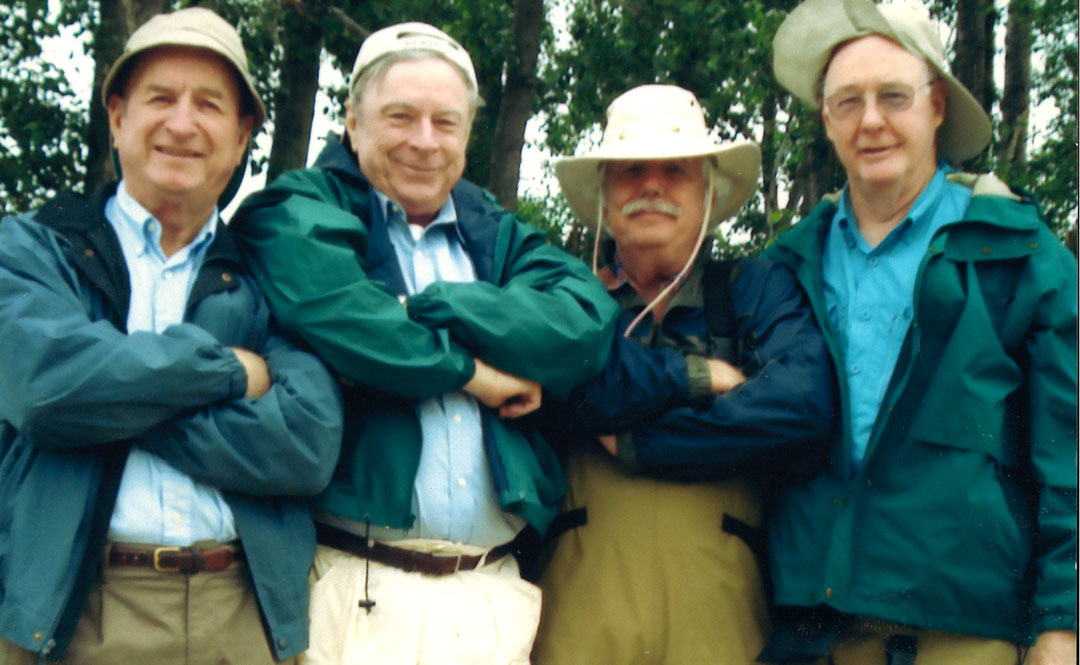 Law School alumni and friends, from left, the late Harry Allen of Gulfport, Mississippi; Robert Weems of Oxford, Mississippi; the late Alex Alston Jr. of Jackson, Mississippi; and Newt Harrison of Jackson took a fishing trip on the Bow River in Alberta, Canada. A scholarship endowment is paying tribute to the life and contributions of Allen.

The late Harry Allen enjoyed practicing law because of the potential it provided him to help people. And when he succeeded, he shared, “You go out, help people and pay it forward.”

Now the Harry R. Allen Scholarship in Law at the University of Mississippi will expand that philosophy, as it provides support to School of Law students. His wife, Emily A. Allen of Gulfport, Mississippi, has made more than $150,000 in contributions to the endowment.

“Harry and I had always talked about starting a scholarship endowment,” she said. “He was all about doing whatever you can to help others. Harry always had wonderful memories of the law school. He would be very pleased with the scholarship and would tell me to keep contributing to it.”

Robert Weems of Oxford, Mississippi, who taught at the School of Law for four decades, was friends with Harry Allen for 70-plus years. Weems grew up two houses down from Allen in Jackson, Mississippi, where Weems always admired Allen.

“Harry was of the highest caliber as a lawyer, for his ethics and his personal life,” Weems said. “He was as fine a person as I have ever known, and I have known some fine people. He was the epitome of a Christian gentleman. He felt an individual obligation to take part in the affairs of society other than just in legal matters.”

Weems and Allen practiced law together in the firm Brunini, Everett, Grantham & Quin in Vicksburg, Mississippi in the 1960s, when integration became an issue in the community. Weems said Allen felt compelled to be actively involved in supporting integration efforts.

Harry Allen passed away in early 2016. Emily Allen said she would like future recipients of the scholarship to know “what a kind, generous and loving man” Allen was.

“He listened to all sides of an argument before drawing any conclusions. He prayed about things. He was the first person to give God the credit, and he used his faith for good,” she said.

Allen, Weems and UM Chancellor Emeritus Robert Khayat redeveloped their close friendship after Allen bought a second home in Oxford, where the three gathered for breakfast on Sunday mornings.

“We loved being with Harry,” said Khayat of the Sunday visits. “Harry was extraordinary. He was an honorable man who was true to the eternal values that have served our country so well.”

Khayat got to know Allen when he and Weems practiced law together.

“When Harry was planning to leave Vicksburg, I called (the now late) attorney Ned Nelson in Gulfport and introduced them. Both were good, smart trial lawyers, and they were very productive together,” he said.

Allen’s dad, Samuel Allen, loved Ole Miss and introduced his son to the university at age 13, when he witnessed Rebel football players Charlie Conerly and Barney Poole set new passing records. Wife Emily Allen would end up loving Ole Miss too, although she graduated from Mississippi University for Women.

Allen earned an undergraduate degree in business from the university in 1955 and served in active duty as a navigator in the U.S. Air Force before returning to the School of Law, where he graduated in 1959.

Susan Duncan, dean of the School of Law, said, “We are so grateful to the Allen family for their investment in the future of the legal profession with the Harry R. Allen Scholarship in Law. Mr. Allen’s legacy of generosity through the practice of law will continue to live on through Emily and the creation of this endowment.”

Having been admitted to the Mississippi Bar, Allen practiced first with Brunini, Everett, Grantham & Quin until 1967, when he moved to join the Gulfport office of the Brian Nelson firm. After the death of partner Ned Nelson in 1987, he became the senior partner of Allen, Cobb, Hood & Atkinson PA until that firm dissolved in 2011. After serving a year as “of counsel” with Currie, Johnson in its Biloxi office, he entered a solo practice in Gulfport as Allen Law PLLC.

Allen’s practice focused on civil litigation including fire and casualty insurance, medical malpractice defense, commercial, eminent domain and public utility litigation as well as banking, contracts and real estate transactional law. He was a member of the Alternative Dispute Resolution Section of the Mississippi Bar and was a certified mediator.

Allen’s concern for his fellow man could be seen in his service as chair of the Supreme Court Commission to Address Concerns for Impaired Lawyers. The Mississippi Supreme Court recognized his significant work with the Chief Justice Award in 2009, the same year he received the Distinguished Service Award from the Mississippi Bar Association and the Above and Beyond Award from the Lawyers and Judges Assistance Program.

Among his numerous other awards were being named Ole Miss Law School’s Alumnus of the Year in 2007 and presented the Mississippi Bar’s Professionalism Award in 2015. Allen also was recognized in the “Best Lawyers in America” for 25 years.

Allen formerly served as general counsel for the Mississippi State Port Authority, Harrison County Development Commission and Hancock Bank. He provided leadership as the Harrison County Commissioner for the Region 13 Commission on Mental Health and Retardation for more than 20 years.

Allen also was active in the First United Methodist Church of Gulfport, and for his board service for the Mississippi Methodist Senior Services, a gazebo was dedicated in his memory at the Seashore Campgrounds Retirement Home. He was an amateur magician and enjoyed giving programs for children.

To make a gift to the Harry R. Allen Scholarship in Law Endowment, send a check with the endowment’s name noted in the memo line, to the University of Mississippi Foundation, 406 University Ave., Oxford, MS 38655; or online at https://www.umfoundation.com/makeagift.

To learn more about supporting the School of Law, contact Suzette Matthews, senior director of development, at suzette@olemiss.edu or 662-915-1122.