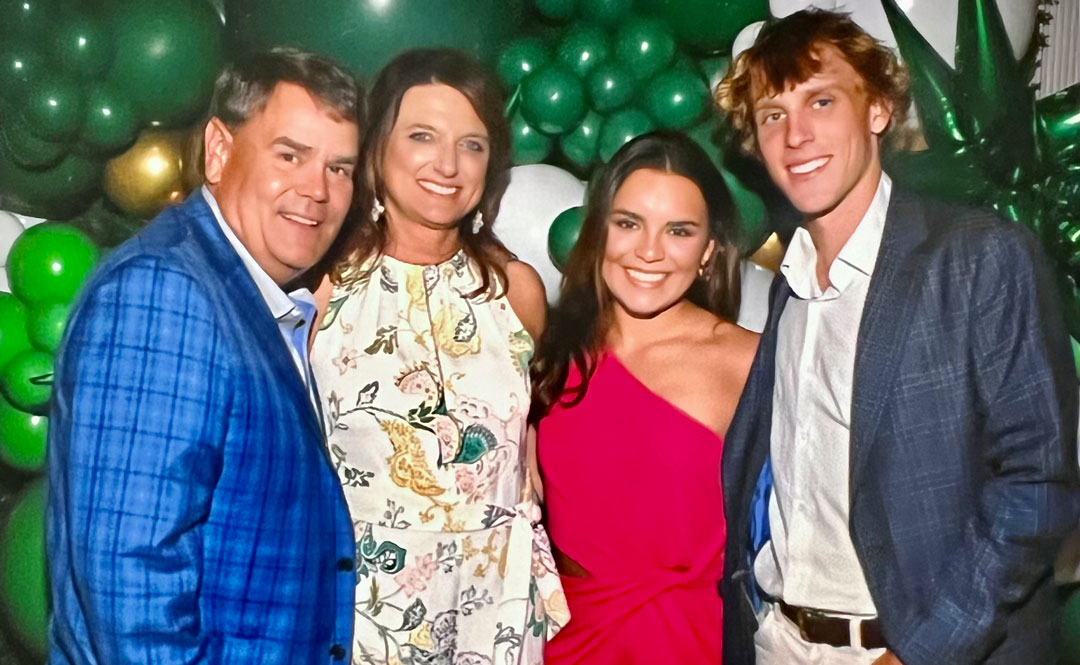 Al and LeaAnne Williams (from left) have committed to growing an endowment that benefits UM economics majors. Here, they're pictured with their children: Mary Frances and Harrison.

LeaAnne and Al Williams of Knoxville, Tennessee, who met at the University of Mississippi, committed to growing an endowment that will help their alma mater recruit students interested in economics.

“Our family started at Ole Miss, and we love it,” LeaAnne Williams said. “We want to see it continue to be the best university it can be and to recruit the best students and faculty.”

Not just a pipe dream, the couple is acting on that desire. With a recent gift of $50,000, they established the Al L. Williams Scholarship Endowment in Economics to provide financial assistance to incoming freshmen majoring in economics within the College of Liberal Arts. Recipients may retain the scholarship for up to eight semesters while in good academic standing.

Al Williams, president and CEO of the nation’s leading baked bean producer, Bush Brothers & Company, earned a bachelor’s degree from the University of Tennessee in 1987 and a master’s degree in economics from Ole Miss in 1989.

Afterwards, Williams accepted his first job offer with Bryan Foods, a division of Sara Lee, as a financial analyst in 1990. In 1997, he joined Bush Brothers where he has worked in several capacities including director of procurement, logistics & supply chain, vice president of human resources, senior vice president and chief financial officer.

In August 2017, he accepted the role of chief operating officer and in 2018 was named president of the company. In July 2019, he was unanimously elected CEO, becoming only the second non-family CEO in Bush Brothers history. Additionally, Williams serves on the board of directors for another family-owned company, Milo Tea.

“We’ve seen how Al’s economics education has been so beneficial to his career, so we hope our gift will help future generations of students have a similar experience,” said LeaAnne Williams, who earned her bachelor’s degree in accountancy from Ole Miss in 1991. “We plan to add to the endowment each year, and our goal is for the scholarship to provide students with financial means for a four-year degree.”

LeaAnne Williams passed the CPA exam in 1993 and started working for Weyerhaeuser Paper Company in Columbus, Mississippi, before the couple moved to Knoxville. There, she started her own CPA firm, focusing on tax, and has enjoyed a successful two-decade career.

“On behalf of the Department of Economics within the College of Liberal Arts, I want to thank Al and LeaAnne for their desire to bolster economics education at the University of Mississippi,” Hendrickson said. “Their gift will greatly improve our ability to recruit the best and brightest students to study economics at Ole Miss.”

The couple, both of whom serve on the Dean’s Advisory Board for the UM College of Liberal Arts, met when Al Williams was a graduate assistant to economics professor Lewis Smith, under whom LeaAnne and her roommate took Economics 201.

Their children are following similar paths. Mary Frances Williams graduated from the Patterson School of Accountancy in May 2022 and plans to pursue a master’s degree in accountancy this fall. An art minor, she will spend the summer in Florence, Italy, studying art. Harrison Williams is a sophomore at Samford University where he plays tennis for the Bulldogs and studies economics like his dad.

Nikki Neely Davis, executive director of development, said the Williamses, both of whom serve on the Now & Ever Campaign committee for the College of Liberal Arts, are shining examples of engaged alumni.

“I’m so glad to know Al and LeaAnne. I consider them wonderful friends and I greatly appreciate their vision for the Department of Economics and for its students. Private gifts like theirs truly make a transformative difference in the quality of education we can offer,” she said.

The Al L. Williams Scholarship Endowment in Economics is open to support from businesses and individuals. Gifts can be made by sending a check to the University of Mississippi Foundation, with the fund’s name noted on the memo line, to 406 University Ave., Oxford, MS 38655 or by giving online at https://give.olemiss.edu.

For more information about supporting the College of Liberal Arts, contact Nikki Neely Davis, executive director of development, at nlneely@olemiss.edu or 662-915-6678.