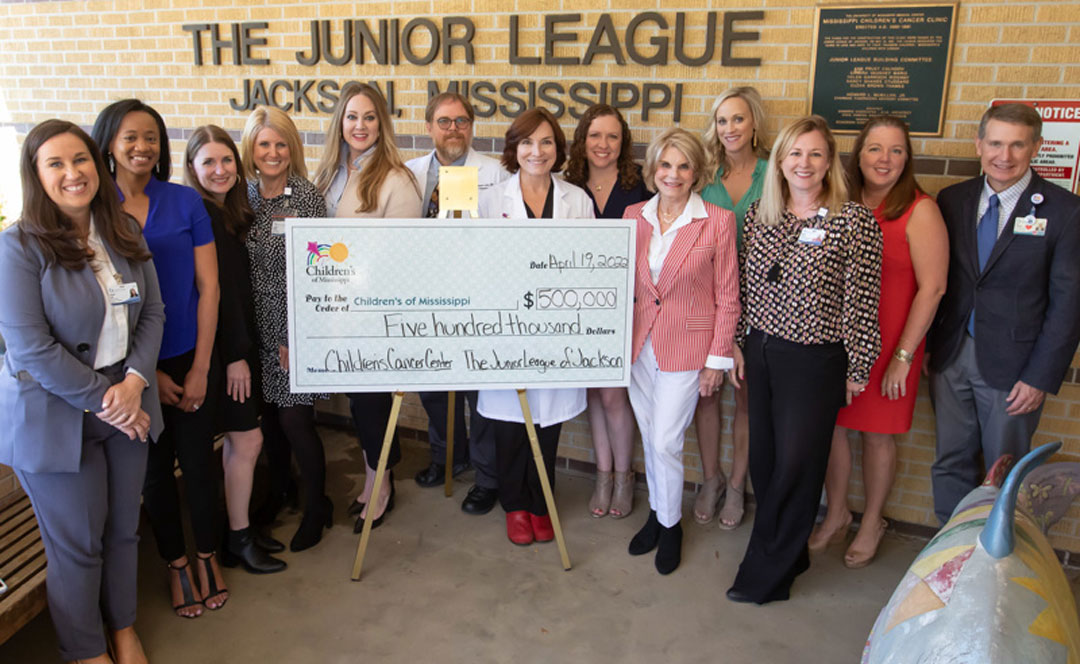 Members of the Junior League of Jackson raised the funds to build what is now the Children’s of Mississippi Center for Cancer and Blood Disorders at the University of Mississippi Medical Center.

Now they’re donating $500,000 toward its renovation. The center’s new interactive waiting space will be named in honor of the League’s commitment.

The renovation fund started with a $1.5 million gift from Pat and Jim Coggin of Jackson. The updates to the center are expected to cost close to $3 million, and these improvements will mirror the connecting Kathy and Joe Sanderson Tower.

“This project will bring much-needed updates to the Center for Cancer and Blood Disorders that will make it a more comfortable space for our patients and their families,” said Dr. Anderson Collier, director of the center and chief of pediatric hematology-oncology at UMMC.

The new clinic space will include 14 examination rooms, an increase from eight. The center’s infusion room, currently an open space for eight, will be enlarged to house 20 semi-private infusion bays. Each bay will have an infusion chair, guest chair, and electronics to keep patients entertained.

The new interactive waiting space named in honor of the Junior League of Jackson will be relocated to improve the flow of patients and families through the clinic. Inpatients will be able to check in electronically or in-person, just like in the clinics inside the Sanderson Tower. The waiting area updates will also include interactive children’s activities, Collier said.

A larger, more efficient nurses’ station named in honor of the Selby and Richard McRae Foundation’s generous support of the project is included in the renovation. Research areas and additional workspace for hematologists and oncologists to improve collaboration are also included in the plans.

“Research is an essential component of what we do in the Children’s Center for Cancer and Blood Disorders,” Collier said. “This provides patients who have cancer or sickle cell disease access to the most advanced research and treatment. The larger and improved space will also improve the flow of patients through the clinic, decreasing wait times.

“The increased space will also allow for more multi-disciplinary clinics to improve the patient experience for those patients who often need to see multiple providers on the same day,” Collier said. “Instead of the patients going to each of the providers, we want to bring the providers to the patients.”

The Center for Cancer and Blood Disorders includes one of the largest pediatric clinics for sickle cell disease in the country as well as care for other disorders including iron deficiency anemia, and disorders involving platelets, clotting or bleeding disorders.

Dr. Mary Taylor, Suzan B. Thames Chair and professor of pediatrics, said the updates to the center will improve the patient experience for thousands of children and will add to the Junior League of Jackson’s legacy at Children’s of Mississippi.

“I am so grateful for the Junior League of Jackson’s commitment to pediatric health care in Mississippi,” she said. “This extraordinary group of women’s dedication to the Children’s of Mississippi Center for Cancer and Blood Disorders makes such a difference in the lives of children and families battling cancer, and I can’t think of a better cause to support.”

Ann Calhoon, a JLJ leader who was also devoted to helping build the center, remembers the hopefulness of the center’s groundbreaking and opening ceremonies.

“The Junior League’s steadfast support of children is just incredible,” she said. “I am proud I was a part of the initial project to build the Cancer Clinic in 1991, but I am even more proud that over the past 30 years, this dedicated group of ladies has remained committed to improving the lives and health of all Mississippi children. This work is so important for our state’s children and their families.”