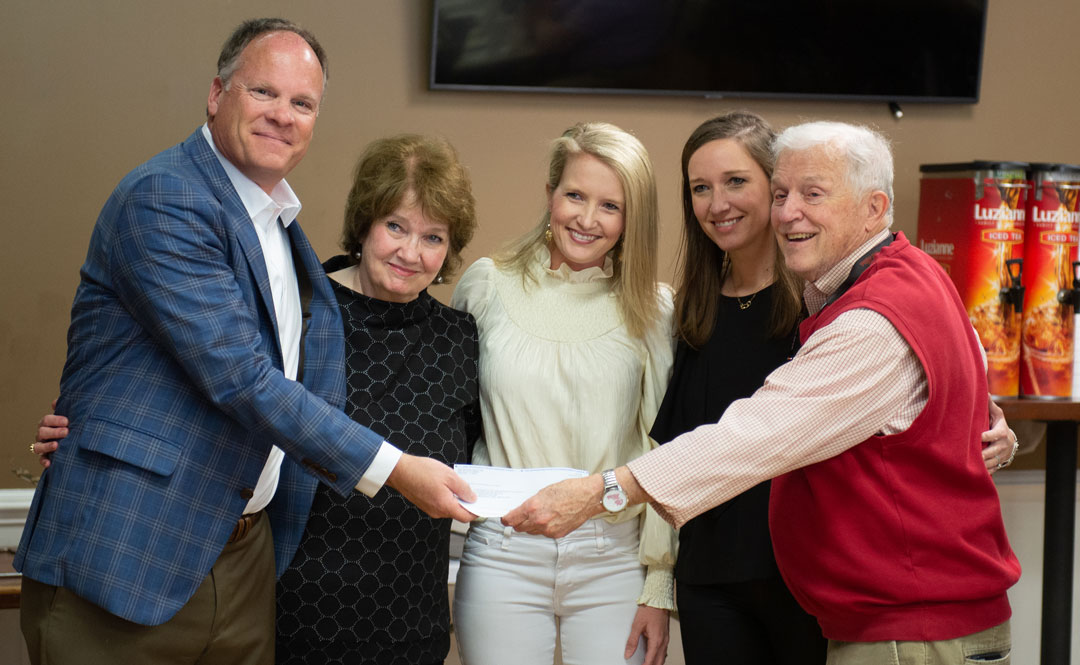 David Magee of the University of Mississippi, far left, receives a check from the Peacock family of Clarksdale, Mississippi, for the Edward Peacock IV Student Addiction to Recovery Support Fund. Paying tribute to the life of their son and brother are, from left, Ann Peacock, Virginia Peacock Douglas, Ann Christopher Trotter and Ed Peacock III. The fund will support Ole Miss students who need outpatient therapy but cannot afford it.
Photo by Brett Barefoot/UM Development

The late Edward Peacock IV was known for his amazing personality, caring spirit and bright intellect. He also was known to have an ongoing struggle with alcohol addiction.

Now, to help other University of Mississippi students overcome drug or alcohol addiction and to honor the memory of their son, Ann and Ed Peacock III of Clarksdale, Mississippi, are establishing the Edward Peacock IV Student Addiction to Recovery Support Fund. Beginning in August 2022, the fund will provide support to students who need outpatient therapy but cannot afford it.

The Peacocks made a gift of $150,000 to create the fund, and an additional $23,505 was given in memorial gifts from 165 individuals. This initiative was also recently promoted during Ole Miss Giving Day 2022, and $4,325 was raised through this effort. The funds have been directed to the William Magee Center for Wellness Education, with its primary focus on preventing substance abuse.

Unique among colleges and universities, the assistance program includes 10 weeks of therapy from the recover/DREAM outpatient center in Oxford, Mississippi. Opened in late 2021, the recover/DREAM outpatient center’s goal is to keep clients going in life, with school responsibilities or work demands, while getting the help and support needed to recover. Serving Oxford, Ole Miss and surrounding communities, recover/Dream is owned and operated by four local families who have found success in recovery and support.

“Stigma, cost and availability of treatment centers are huge barriers that individuals face when seeking help with overcoming addiction,” Jeter said. “The Peacocks’ generous gift alleviates these barriers and allows students to receive outpatient therapy regardless of their financial situation.

“The gift further allows students to bypass the shame and stigma felt when trying to identify resources to aid them on their journey to sobriety. The impact to students, their families and society is not quantifiable. We are grateful to the Peacocks for their support.”

“Edward was addicted to alcohol and attended treatment five times,” his father shared. “He also had a pediatric frontal lobe tumor the size of a lemon, which was removed in January 2017. Edward was told by his doctors that he was not to drink alcohol after the tumor was removed.”

Ann Peacock laments that alcoholism and the tumor took so much from her son’s life.

“The tumor was life-altering,” she said. “The effects of it were beyond Edward’s or our control. I believe the tumor had a lot to do with our son’s journey into alcoholism.

“Edward was also in denial about his addiction,” she continued. “Once he was able to admit he had a problem, he began taking small steps toward recovery. Life was so much better, and Edward found joy in the process.”

The Peacocks chose to partner with recover/DREAM because of their son’s lifelong friendship with Ford McElroy, COO of the outpatient treatment center.

“Edward always had a hand out to help the little guy who was mistreated. When someone is in the depths of their alcoholism or drug addiction, they feel beaten, broken, useless and defeated,” said McElroy, whose father, Ronnie, was Peacock’s godfather.

“This fund in his name will hopefully prevent many students from dropping out of school, allowing them to continue their education at Ole Miss, while learning to live a healthier life without the need for substances. It was what Edward was learning to do, and I know he would want to help the underdog.

“I am humbled by the generosity of the Peacocks and of others who have made gifts to this fund,” McElroy continued. “I am grateful to help oversee students who need to gain treatment in my friend’s name. It means a lot; Edward was one of a kind, and I miss my buddy.”

Peacock’s parents hope to see many successes from their investment.

“We look forward to the day when a student or former student will knock on our door and tell us that the Edward Peacock IV Addiction to Recovery Fund saved his or her life,” Ed Peacock said. “We hope to hear of success stories of students becoming alcohol and drug free.”

Edward Peacock, who passed away in Clarksdale on Dec. 30, 2021, from a seizure, graduated from Ole Miss with honors in 2003 with a double major in political science and history and a minor in English. While an undergraduate, Peacock was a member of Phi Delta Theta fraternity and involved with two academic honor societies: Phi Alpha Theta and Pi Sigma Alpha.

Peacock then pursued a juris doctor degree from Tulane University Law School, where he graduated in 2007. While at Tulane, two semesters were interrupted by Hurricane Katrina; after six weeks he returned to New Orleans to help with recovery efforts. When his name was called at commencement, the vice president of the third-year law class received the only standing ovation.

Upon law school graduation, Peacock moved to Washington, D.C., where he began a career in politics, first interning for Congressman Travis Childers. He then assisted Barbara Comstock, who served two terms as a congresswoman from Virginia, in her successful campaign for the Virginia Commonwealth State Legislature.

Peacock was also a volunteer with the John McCain-Sarah Palin campaign for the White House, once driving Palin on an extremely busy interstate to a speaking engagement. (His parents said he was not known to be a good driver.) Peacock moved to Columbia, South Carolina, where he worked for Alan Wilson’s successful campaign for state attorney general.

Upon retiring from campaigns outside of Mississippi, Peacock lived in Oxford and Clarksdale practicing law. He was a member of the Mississippi State Bar Association and was authorized to practice in both the Northern and Southern District Courts in the state. He had previously been involved with the Coahoma County Chamber of Commerce, Habitat for Humanity, Crime Stoppers and the Kiwanis Club.

Ann Peacock reflects on what others have shared about her son.

“We have received calls and messages from people who had love and gratitude for Edward and the impact he made on their lives — even helping those with their own sobriety,” she said. “Someone who had suffered with addiction sent me a text about Edward and said, ‘He loved with his whole heart. He was always for the underdog because he had a burden for them in his heart.’”

To make a gift to the Peacock Fund, send a check to the University of Mississippi Foundation, with the fund’s name noted in the memo line, to 406 University Ave., Oxford, MS 38655; or online at http://umfoundation.com/makeagift.

For more information on providing support for drug and alcohol programs in the William Magee Center for Student Wellness, contact Brett Barefoot, senior director of development for parent and family leadership, at bmbarefo@olemiss.edu or 662-915-2711.