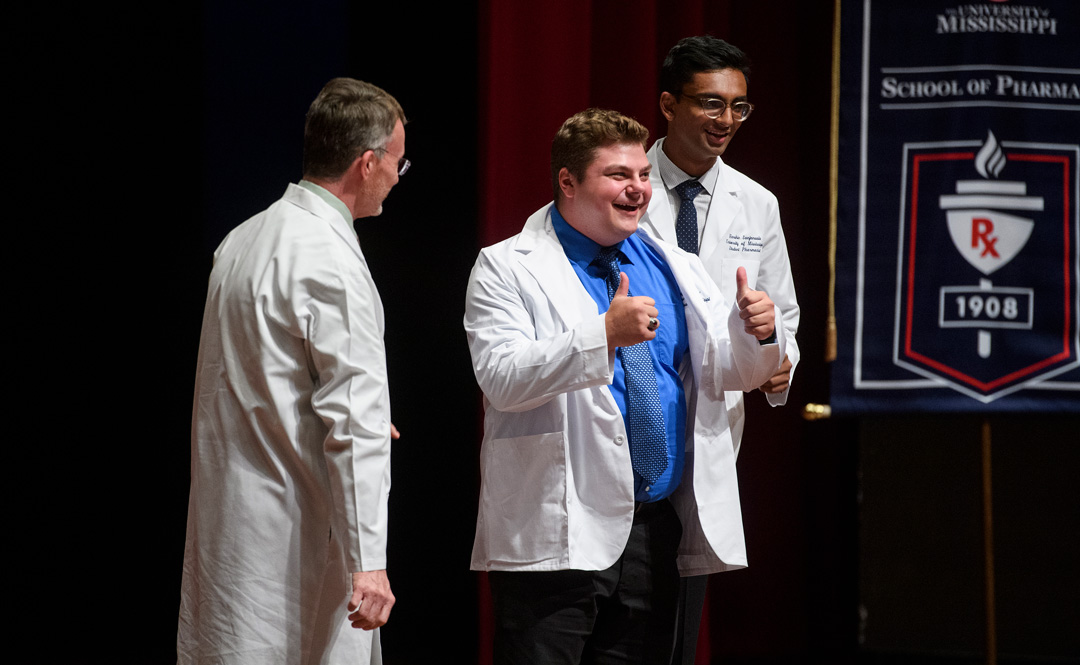 The Loree Goheen Allen Memorial Scholarship will be awarded to School of Pharmacy students who show a great dedication to service. The scholarship endowment has grown from gifts by family and friends made in tribute to Allen’s life. She was the wife of David D. Allen, dean of the Pharmacy School, pictured here at left, during the 2019 white coat ceremony.

Ask anyone who knew Loree Goheen Allen of Oxford, Mississippi, to share their memories, and the stories of Allen’s kindness, concern and support of other people start flowing.

Likewise, the outpouring of gifts to the Loree Goheen Allen Memorial Scholarship Endowment in the University of Mississippi School of Pharmacy now total more than $66,000 and reflect the love and appreciation family members, friends and colleagues had for her. The scholarships will be awarded to pharmacy students who exhibit a strong commitment to service.

“Loree was one of those rare lights who brought illumination to darkness. I was astounded that she would be available to assist anyone no matter who they were or even if they were in legitimate need,” Tonos said.

“Her primary concern was always for the other person and she never seemed to care about what she wanted or needed. She had presence and while she is missed, her presence is still felt.”

Allen, 56, died Jan. 21, 2021, after a brief illness. She was the wife of David D. Allen, dean of the university’s School of Pharmacy, who becomes president of the University of Health Sciences and Pharmacy in St. Louis, Missouri, on July 1.

“In addition to being a dedicated wife and mother, Loree was, above all, a kind and gentle person whose love knew no bounds and whose heart was known by all she met,” Allen said. “No one was unlovable in Loree’s eyes and no one was without a true friend in her presence.

“The love she cultivated in her life and instilled in others will endure in our hearts.”

Terri Srinivasan of Maysville, Kentucky, said her sister also had a real passion for education.

“Loree struggled financially through college – she took on a lot of student loans – to earn a degree in elementary education. The field of education really spoke to her; she was driven to help people,” she said.

“This scholarship endowment is perfect. It would be so meaningful to Loree to know this scholarship will lessen someone else’s burden while earning a great education at Ole Miss,” she continued. “Loree would be grateful and elated that people made gifts in her honor. This is such a positive way of remembering her, to help a service-oriented student get ahead in life.”

Ole Miss alumnus Dylan Ware, a pharmacist at DCH Regional Medical Center in Tuscaloosa, Alabama, said Allen was “kind and thoughtful” when it came to the pharmacy student body.

“The first time I met Loree Allen was at a Pharmacy Olympics event,” Ware said. “I walked up and told her how much I loved the Fruity Pebbles treats she made for the weekend.

“Little did I know about a year or two later, she would bring a pan of the treats to the hospital for my coworkers and me to enjoy when I completed my residency. I am truly thankful for the opportunity to have known her.”

Loree Allen was born in Ashland, Kentucky, attended Ashland Community College and graduated from Transylvania University. She taught third grade before enrolling in the University of Kentucky to earn certification in special education.

Loree and David Allen met at a mutual friend’s Christmas gathering and married on Oct. 26, 1991. He recognized right away that “the Golden Rule wasn’t a model to her; it was an ingrained personality trait.”

“People met Loree and immediately loved her,” he said. “And, that was evident when she became sick. The support from our ‘Phamily,’ the university and Oxford communities, our church and beyond was heart-warming – really nothing short of extraordinary.”

After once learning a pharmacy student was anxious about beginning a rotation, Loree Allen didn’t just offer verbal reassurance but drove the student to the rotation and made her feel comfortable, according to stories recounted about her support of students.

When the Allens’ sons, David D. Allen III and Drew Patrick Allen, entered high school, she turned her focus to them and stepped away from full-time education-related work. Both now have completed their undergraduate degrees and are pursuing graduate work.

During her time in Oxford, Allen focused her efforts on outreach work for St. John the Evangelist Catholic Church. Her commitments to St. John’s included serving as a eucharistic minister and supporting More Than a Meal and Sunday evening spaghetti suppers.

One unexpected benefit of the global pandemic, David Allen noted, was the couple’s sons moved home in March for nine months, giving Loree Allen abundant time with them, which she filled with home-cooked meals and other maternal attention. In addition to her husband and sons, Loree Allen is survived by family members in Kentucky, Illinois and Ohio.

To contribute to the Loree Goheen Allen Memorial Scholarship Endowment, send a check with the scholarship’s name written in the memo line to the University of Mississippi Foundation, 406 University Ave., Oxford, MS 38655; or online at http://umfoundation.com/lga.

For more information on the scholarship, contact Port Kaigler, director of development for the School of Pharmacy, at port@olemiss.edu or 662-915-2712.