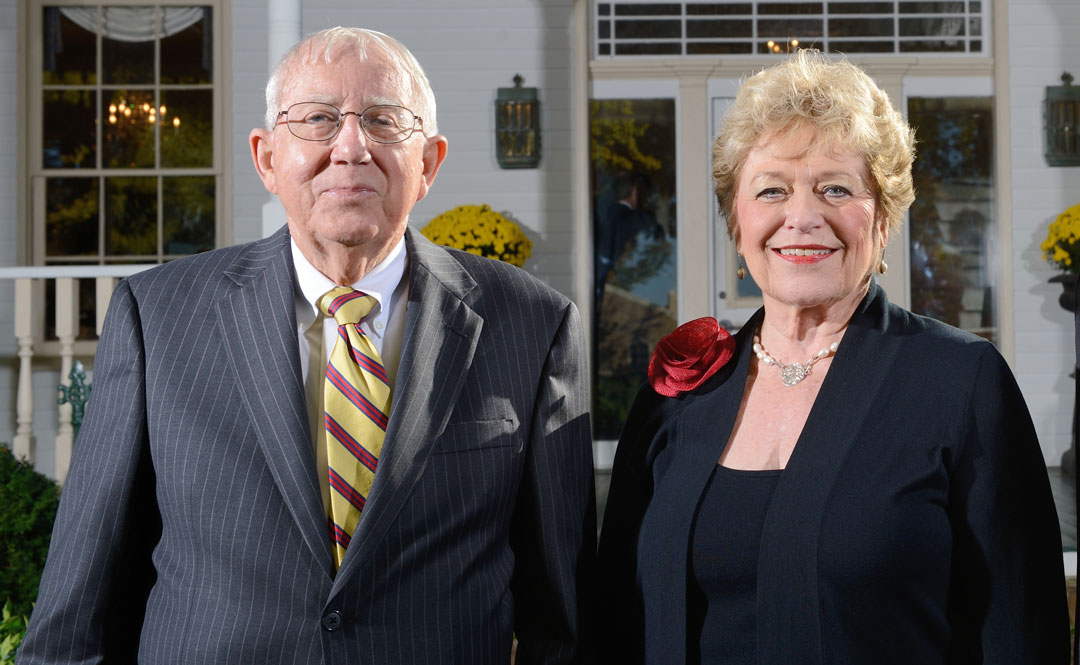 The late Roger Friou, pictured with his wife, Susie, directed $1 million to the Patterson School of Accountancy through his estate.

One mother’s decision to send her son to the University of Mississippi launched a college experience that continues to transform the lives of students and the Patterson School of Accountancy – and that fruitful legacy is expanding.

The late Roger Friou of Ridgeland, Mississippi, was that son, and his estate has directed a $1 million gift to two scholarship endowments he created years ago, representing another chapter in his longtime relationship with his alma mater.

Friou might have attended a different university, except his mother, Annie Belle H. Friou of Tupelo, Mississippi, sought the advice of a family friend on the best accountancy program available for her only child. He, in turn, earned Ole Miss undergraduate and graduate degrees, played pivotal leadership roles in businesses, served on foundation boards benefiting students and gave back through alumni service.

“Roger Friou has played a major role in the Patterson School’s growth and rise in prominence over many years,” said Mark Wilder, dean of the Patterson School of Accountancy. “He has provided strong leadership, personal resources and considerable time to our school.

“Over more than two decades, I have witnessed the tremendous impact that the Friou Accountancy Scholarships have made on our program, enabling us to recruit the best and brightest to the university and to the Patterson School. These high-performing students have further strengthened our program, elevated our academic reputation and helped us move up in the national rankings of accounting programs,” he said.

“We will always be deeply grateful to Roger and Susie Friou for their legacy of providing educational opportunities.  They have played a key role in the many successes that the Patterson School enjoys today,” Wilder said.

Friou and his wife, Susie, established the two endowments to support accountancy students.

“My mother was absolutely correct in guiding me to Ole Miss,” said Roger Friou in a former interview. “When she passed away in 1984, the first scholarship I established was in her memory.

“My dad passed away when I was 14 but he left me just enough money to go to college, inspiring me to help deserving young people pursue college degrees.”

Regarding the estate gift, Susie Friou said, “Roger wanted to give back as much as he could. He believed in education and thought the education he received at Ole Miss was superior. He left a wonderful legacy that is very meaningful to me, our sons and our grandchildren.”

Throughout the years the Frious attended the annual accountancy student awards dinner, and Susie Friou, a graduate of Tulane University, said it pleased her husband “to no end” to meet their scholarship recipients, such as Paul Andress of Jackson, Mississippi.

“The Friou Scholarship helped me tremendously throughout my undergraduate time at the Patterson School of Accountancy,” Andress said. “This scholarship as well as the accountancy school’s national rankings were the major reasons why I chose to major in accounting.

“I am very thankful for the Frious and the contributions they have made to impact students’ lives. I really enjoyed meeting Mr. Friou at the dinner. His generosity helps keep the accountancy school in the national rankings as well as provides students with countless opportunities,” said Andress, who is now pursuing a master’s degree in tax and data analytics at Ole Miss.

Not only has Roger Friou’s service impacted the accountancy school but also the entire university, such as his service to the University of Mississippi Foundation, where endowed funds stand at more than $800 million. He served on the board and on the foundation’s executive, audit and investment committees. The former chair was awarded the distinction of being elected an emeritus board member in 2020.

“Roger’s leadership of this foundation and his active role on its committees has greatly contributed to UMF’s growth and success,” said Wendell Weakley, president and CEO of the foundation. “He always led from in front, and we see his positive impact in our work here each and every day.”

Susie Friou said her husband’s foundation board service was a highlight of his leadership.

“Roger loved every minute of being on the University of Mississippi Foundation’s board and made many enduring friendships through that service,” she said. “He found such joy in serving in that capacity, helping strengthen the university.”

In addition, Friou served for 14 years on the board of the Luckyday Foundation, which provides major scholarship support and other programming for academically deserving students with financial need. Luckyday Scholarships are awarded at Ole Miss, which is home to the Luckyday Residential College.

The certified public accountant passed away in April 2020. He began his business career with Standard Oil of California (now Chevron) in 1958. In 1960, he joined the public accounting firm of Ernst & Ernst (now Ernst & Young) in its New Orleans, Louisiana, office, which then took him to the firm’s newly formed Jackson, Mississippi, office in 1962.

In 1966, he joined the Jitney Jungle supermarket chain as controller. He remained with Jitney Jungle in an executive position until 1979. From then until 1984, he was a senior officer with a national discount store chain. In 1984, he rejoined Jitney Jungle, serving as executive vice president/CFO and later as vice chair of the board.

Friou was director and chair of the audit committee of Parkway Properties Inc., a real estate investment trust, and a director of Daily Equipment Co., both of Jackson.

The alumni leader was inducted into the Patterson School of Accountancy Hall of Fame and served on the Accountancy Advisory Council. In addition, he was active on the board of directors and executive committee of the Ole Miss Alumni Association.

Friou served on the Athletics Committee at Ole Miss from 2005 to 2007 and was a member of the Vaught Society. Gate 14 of Vaught-Hemingway Stadium is named in tribute to the Frious’ major support of Ole Miss Athletics.

In addition to his wife, Friou is survived by the couple’s sons and daughter-in-law, Lily and Tom Friou of New Orleans, and Stuart Friou of Isle of Palms, South Carolina. There are also five granddaughters: Caroline Friou Sanchez, and Rebecca, Olivia, Julia and Claire Friou.

To support the Friou Scholarship endowments, click here. To learn more about supporting the Patterson School of Accountancy, contact Jason McCormick, director of development, at jason@olemiss.edu or 662-915-1757.