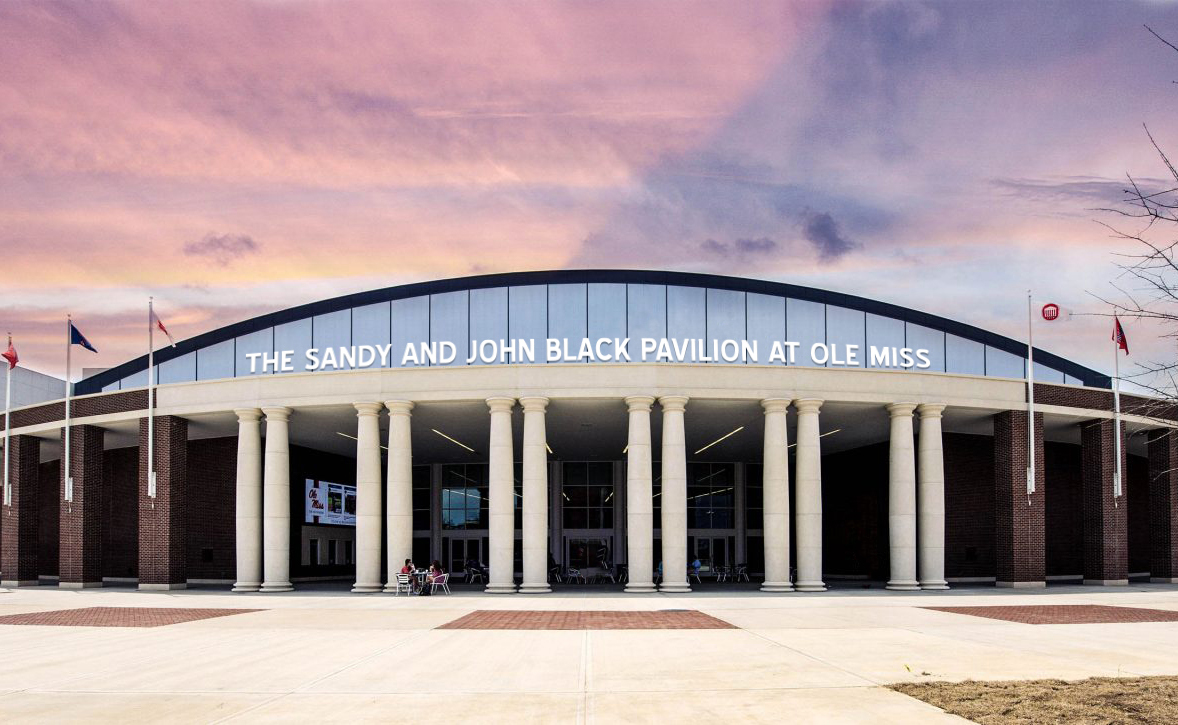 The University of Mississippi’s gleaming, state-of-the-art basketball and event arena has been officially named the Sandy and John Black Pavilion at Ole Miss in recognition of a $10 million gift from the Madison, Mississippi, couple.

The Mississippi Institutions of Higher Learning (IHL) board approved the naming on June 17, 2021.

Longtime supporters, the Blacks said they’ve been fortunate financially and want to make a gift they could enjoy with their family: three adult children, eight grandchildren and a great-granddaughter – most of whom attended Ole Miss.

“We’re fortunate that we’re able to do something like this and leave a legacy so to speak,” said John Black, a retired certified public accountant and entrepreneur. “We decided to respond with a gift that we could be proud of and have our kids and grandkids take a look from time to time as they happen to pass by this facility.”

Sandy Black agreed: “Our children and grandchildren will get to see our family’s name, and we hope it will instill in them the importance of giving back to the community. We also want them to realize how important the University of Mississippi is to us.

“We value giving and we believe in giving back,” she continued. “We’re just really proud to be a family with so many members associated with Ole Miss.”

“John and Sandy are two of the most gracious people I’ve had the honor of knowing,” he said. “Their loyalty to the university is as wide as it is deep – reaching broadly into not only athletics but also academics and the many facets of our medical center.

“This couple’s legacy will touch generations of students, alumni and friends because they keep abreast of our needs and are committed to helping meet them with crucial support. We are extremely grateful to John and Sandy for their extraordinary generosity.”

The Blacks’ latest gift is their third contribution to the Vaught Society, the philanthropic leadership group of the Ole Miss Athletics Foundation.

In 2015, the Blacks made an $11 million gift to the University of Mississippi Medical Center, the largest private gift ever received by UMMC in a single year. Since then, the Blacks also made a major gift to renovate the guest house at the chancellor’s home on the Oxford campus.

In 2019, Sandy Black made a $500,000 gift, essentially purchasing all of William Faulkner’s furniture from the Nobel Prize-winning author’s extended family with the understanding that the pieces would remain permanently on display at Rowan Oak – Faulkner’s historic Oxford, Mississippi, home. Black fell in love with Faulkner’s home in 1989, when she and a group of friends began attending the annual Faulkner and Yoknapatawpha conference.

John Black, a University of Mississippi Foundation board member, earned a bachelor’s degree in mathematics from the university in 1961 and a master’s degree in accountancy in 1962. In college, he was a Taylor Medalist and member of Omicron Delta Kappa academic honorary and Phi Delta Theta fraternity. Sandy Black attended the university and was a member of Phi Mu sorority.

The couple, who met at a fraternity party, married in 1963.

In 1981, he sold the business to Beverly Enterprises, the largest company in the field, and continued to find success as an investor both in stocks and real estate. At one time, he owned all Courthouse Racquet & Fitness locations in the Jackson area, which he later gifted to UMMC to promote wellness.

“Sandy and John are leaders in the Ole Miss community, and we cannot begin to thank them enough for their commitment to our campus,” said Keith Carter, vice chancellor for Intercollegiate Athletics. “We are beyond excited to honor their great passion and engagement by placing their names on the Pavilion.

“The impact of their generosity will be felt by all of our student-athletes and will help provide the resources necessary for our teams to compete for and win championships.”

Designed by AECOM and built by BL Harbert, the Pavilion boasts a capacity of 9,500 fans and a number of first-class amenities, including courtside and baseline seating for students, three premium club areas for fans and more than 1,700 premium seats.

The Pavilion, which includes a five-story parking garage with 800 spaces that services the entire campus community, is also the site for many university events, such as lectures, receptions and the annual freshman convocation.

“The central location of the Sandy and John Black Pavilion at Ole Miss provides a premier front door for Ole Miss athletics and a destination point for all students not only on game days but every day of the week,” he said. “We are excited and honored to forever attach John and Sandy’s names to the crown jewel of our athletics facilities.”

By Bill Dabney and Kyle Campbell