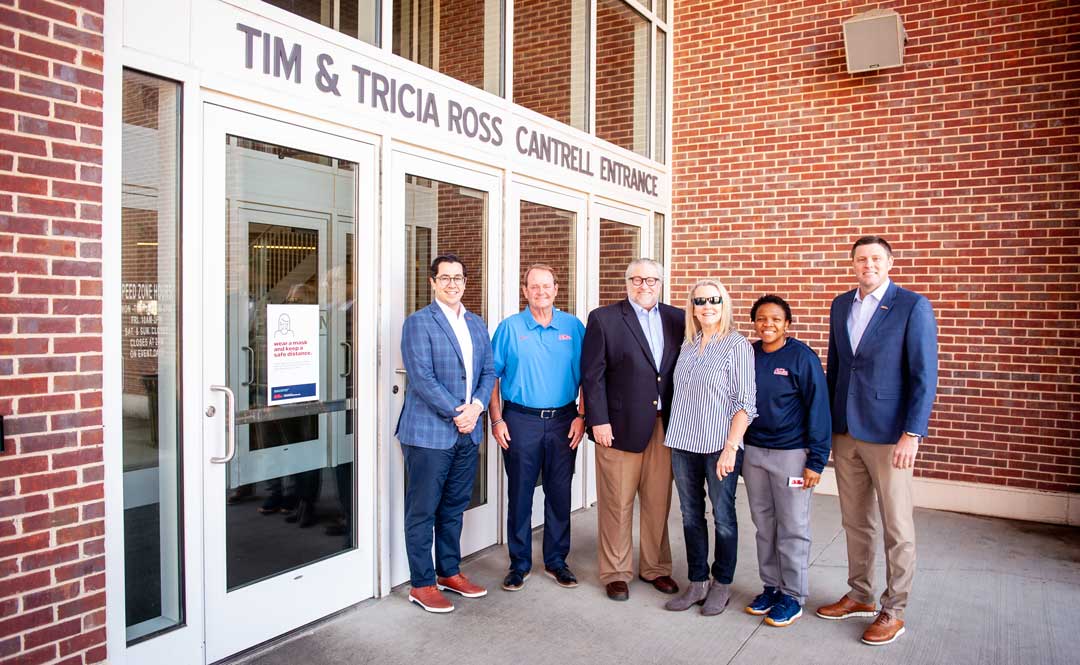 To say Tricia Cantrell is passionate about Ole Miss Basketball is an understatement at best.

The Memphis, Tennessee, native and now Oxford, Mississippi, resident grew up a Rebel fan inspired by her father, Ralph Ross, who played center for Ole Miss in the Old Gym (now Martindale-Cole Student Services Center). Visit her home and she’s quick to show off slats she collected from the gymnasium’s floor when the Rebels moved their venue to C.M. “Tad” Smith Coliseum, affectionately known as the Tad Pad.

Cantrell, a 1977 UM School of Education graduate, rarely missed a home game in either of those venues and now she’s a fixture in courtside seats at the Rebels’ new home court: the vibrant, state-of-the-art Pavilion at the University of Mississippi.

Having her name attached to the Pavilion seems a fitting way to “recognize what Ole Miss Basketball has meant to her life,” said husband Tim Cantrell, a 1979 graduate of the UM School of Business Administration with a degree in accounting and recently retired CFO of Tenax Aerospace. The couple’s $500,000 gift to the university has named the venue’s northwest entrance.

“We are so grateful to Tim and Tricia for their generous gift to Ole Miss Athletics. Their investment into our program will directly benefit our student-athletes who are always our first priority,” said Keith Carter, athletic director and vice chancellor for Intercollegiate Athletics.

“I got to know the Cantrells when I played basketball for Ole Miss, and we have since become friends. They are some of our most ardent fans, especially Tricia who has really invested so much of herself into our players’ lives through the years.”

After they graduate, some never look back. Others, however, seek Cantrell’s advice. She offers them encouragement and affirmation, even admonishment when needed. She talks to them about life skills: the importance of getting a good education, saving money, staying out of debt, putting off self-gratification — the stuff of adulting they didn’t learn in a classroom or on the basketball court.

Almost as much as the friendship she offers, the players appreciate the photos she takes. She tries to get at least one good shot of each athlete in action.

One player who had enjoyed only minimal court time especially admired the picture she took.

“He got in at the end of the exhibition game that season, and I zoomed in on him and captured that moment,” Cantrell said. “And he was just flabbergasted because he had never played in a real game at that point.”

Ole Miss Basketball has given Cantrell many memories to treasure. Like the time she and her dad sat behind a young Archie Manning at an Ole Miss-LSU game watching Pete Maravich. Or topping the hill on Hwy. 6 into Oxford that revealed her first-ever glance of the Tad Pad roof when it was under construction. Or flying with the team to away games and tournaments. Or seeing Johnny Neuman and Shaquille O’Neal shoot hoops as student-athletes. Or taking pictures of players with Academy Award-winning actor Morgan Freeman, who is a fan and sometimes sits next to her in the Pavilion.

“It’s funny watching other teams who don’t know he’s going to be there,” she said. “A lot of times, the ball will come out of bounds right at us and the ref or opposing player will come off the court. They’ll see Morgan and then kind of lose their concentration momentarily.”

In addition to these memories, Cantrell credits Ole Miss for giving her much more.

“First of all, if it weren’t for Ole Miss, I wouldn’t be alive because if my dad had not come here, he would’ve never met my mother. Also, I would not have met Tim.”

Married now 43 years, the couple has two adult sons, Brett and Jordan, both UM graduates, and five grandchildren who will be ages 1, 2, 3, 4 and 5 in March.

“Tim and I are blessed to be able to make this gift; it was actually more than we thought we were going to give,” she said. “But it’s what we decided to do because we worry about the school right now, not just athletics but also academics.

“We are wise enough to realize all the financial implications of what this pandemic is doing to all schools. Very few of them are exempt from the impact.”