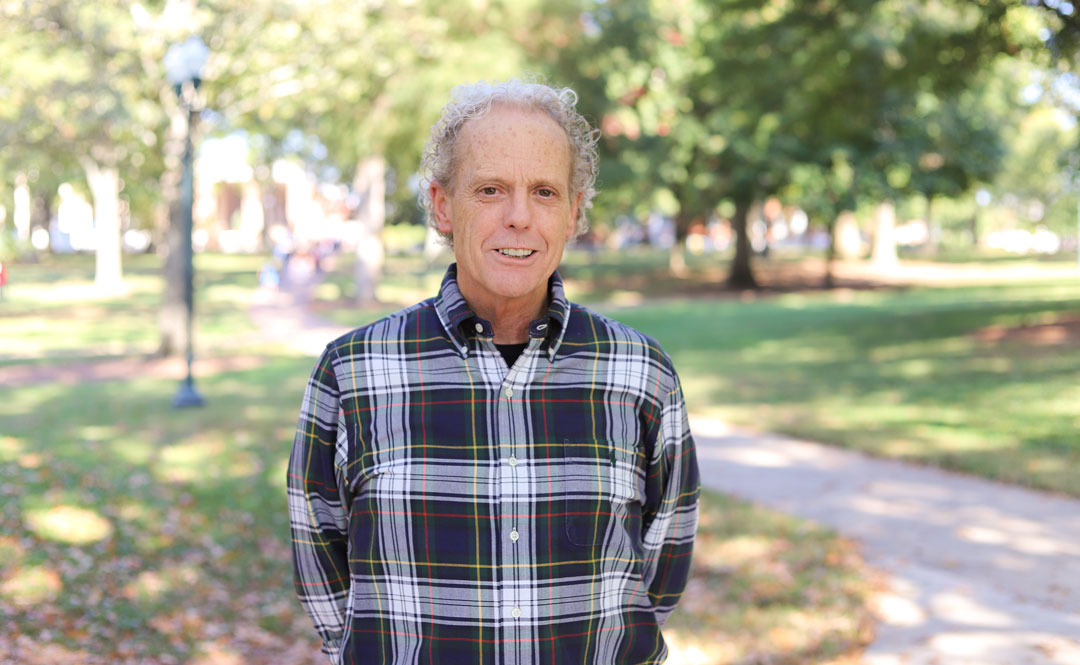 Ole Miss alumnus Fel Salmon of Oxford, Mississippi, is giving resources and his time to the William Magee Center for Wellness Education to help students avoid the path he took. The Magee Center works to change and improve lives through education, research and support related to alcohol and other drugs and holistic well-being.

Incarcerated for drug-related convictions, Salmon, a 1978 Ole Miss graduate, deepened his faith through a Christian ministry/12-step group for inmates at the East Mississippi Correctional Facility near Meridian, Mississippi, finding the sobriety and inner peace he had been chasing for decades.

Now, Salmon is committed to helping others struggling with substance use disorder by sharing his story and resources. Salmon has made a gift to the William Magee Center for Wellness Education on campus (https://magee.olemiss.edu) and a commitment to volunteer and help students and others who may benefit from his remarkable story.

“I started drinking and using substances in junior high school,” says Salmon, a native of Clarksdale, Mississippi. “I was always on something. At the end, before prison, I was smoking crack and methamphetamine. It was going to take a miracle to stop, but that’s what happened.

“Faith found me, and everything changed.”

Released from prison three-and-a-half years ago thanks to his brother-in-law and Ole Miss alumnus Cal Mayo’s diligent legal work, Salmon relocated to Oxford, working to rebuild a sales career. At the same time, he’s been repairing relationships with friends and family damaged during years of chronic substance use.

Established in late 2019, the Magee Center works to change and improve lives through education, research and support related to alcohol and other drugs and holistic well-being. The center engages with students individually, through organizations and in communities to help them flourish and live their best lives.

“I think a lot about young people who may be struggling and want to help them avoid the pain and difficulties I faced,” Salmon said.

Such concern also was shown by his father. Farley Salmon became sober in his 30s thanks to help from his young son, Fel. After a lengthy sales career, Farley Salmon was a director with Sunflower Landing in Clarksdale, a substance abuse treatment center for adolescents.

“He helped a lot of people over the years,” says Fel Salmon, a catalyst in getting his father to treatment.

“When I was 10 or 11 years old, (family members) came to me and said, ‘Daddy needs to go to treatment.’ They said the only way he would go is if I asked him to do it, so I did. I was maybe 11 and said, ‘You need to get help.’ He listened, entered rehab and regained his life.”

Salmon says his mother, Stella, still keeps a daily diary at the age of 91 – a habit since her teens. His drug use caused so much family heartache, with some particular hard years, all chronicled.

“I was always getting into some trouble,” he said.

Salmon was arrested for a serious drug offense while a student at Ole Miss for instance, and he faced multiple drug arrests as an adult. Yet, Salmon managed to avoid stiff consequences – seemingly thriving with a family, a successful sales business and a love for Ole Miss sports (he rarely skipped a football game).

As a functioning addict, he skirted by until a judge gave him 13 long years in prison.

“It was tough in the beginning,” said Salmon, who read books sent by family and friends, slept and meditated.

“Then one morning at 2 a.m. they came to get me,” he says. “They were moving me to another prison. When the bus made a stop at Parchman, I was scared, but it kept going, eventually dropping me off in East Mississippi near Meridian. At the time, it was more challenging than Parchman, and I didn’t know what to expect.”

Salmon was walking through the door when a man approached him.

“He said, ‘I’ve started a new pilot program called Pathway to Change for people who want to get better. There are no drugs, no cell phones and no violence. We offer therapy and a 12-step program – and we talk about faith. It’s a good way to do your time.’”

Salmon had not used any drugs in prison, so he was sober, but Pathway to Change was the force behind his transformation.

“Faith became an important part of my life, and it changed me,” he said. “It filled that void that I was always trying to fill with substances.”

Salmon hopes that by working with the Magee Center to share his story, students can avoid his path.

To make a gift to the William Magee Center for Wellness Education, send a check to the University of Mississippi Foundation with the center’s name written in the memo line, or give at https://give.olemiss.edu. For more information, contact David Magee, director of institute advancement, at dmagee@olemiss.edu or 662-915-1311.