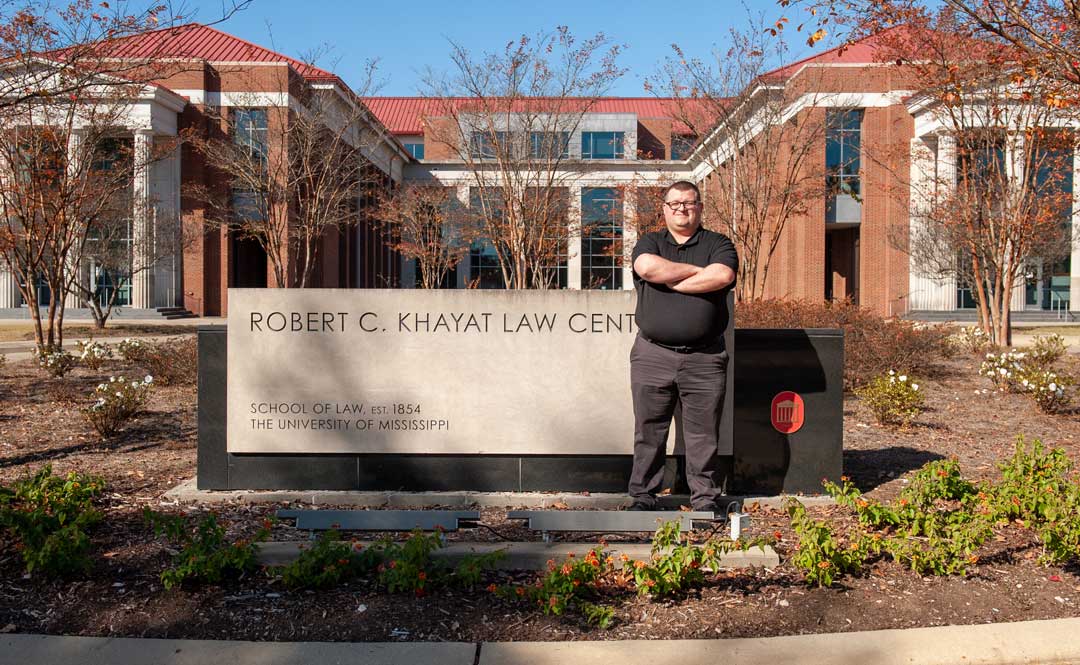 Jonathon Hoskins is the first recipient of a new scholarship established by the Henry L. and Grace Doherty Foundation specifically for third-year law students.

A $100,000 gift created the James R. Billingsley Third-Year Law Scholarship Fund, which gives each recipient $10,000 toward tuition for their final year at the UM School of Law.

Jonathon Hoskins of Banks, Arkansas, is the first recipient and said the award comes at an opportune time.

“I’ve exhausted my GI benefits, so this scholarship will really help me continue to pursue my dreams of working in civil or criminal litigation,” said Hoskins, who served in the Arkansas National Guard from 2007 to 2013 and on active duty at Fort Hood, Texas, from 2013 to 2016. “I feel really honored and surprised by this generous gift.”

Given by the Henry L. and Grace Doherty Charitable Foundation, the new scholarship fund honors the late James R. Billingsley, who led AT&T as chief regulatory counsel through cellular and antitrust negotiations with the federal government.

“My father was a rabid Ole Miss fan in the broadest sense. Football aside, he loved the university and was very proud of what the university had achieved in many disciplines,” said Jim Billingsley, an attorney in the greater New York area.

“He could go on and on about the various programs as well as the quality education he received that benefited him throughout his life. He was passionate about Ole Miss, so we wanted to give something back that would reflect his passion.”

Billingsley died at his Rye, New York, home in June 2019, having served for 40 years as trustee, vice president and treasurer of the Doherty Charitable Foundation, which was founded by his wife’s family primarily to fund marine research and education. In fact, in 2015, the foundation made a major gift to UM’s Center for Water and Wetland Resources.

Billingsley, a 1950 law graduate, was a consistent member of the Lamar Order, the School of Law’s giving society. He also made gifts to Ole Miss First and Ole Miss Athletics.

“He loved Ole Miss football, and I had the pleasure of accompanying him many times to the Grove on game days,” Billingsley recalled. “It’s a passion we all share now. In fact, at his memorial service, we had all the children and grandchildren yell ‘Hotty Toddy.’”

Like Hoskins, recipients of the Billingsley Scholarship will be full-time, third-year law students in the top 25% of their class, with preference given to students who are not receiving other substantial financial aid.

“We are so grateful to the Doherty Charitable Foundation for this generous gift because historically the number of scholarships we’ve been able to award to third-year students has been very limited. This will be a great benefit to our students and ultimately to the school itself,” Dean Susan Duncan said. “Additionally, we are thrilled to be able to reward students who have shown great dedication to academic achievement during their time here.”

Born in Rome, Georgia, in 1927, Billingsley helped support his family during the Great Depression, starting with a paper route on foot at age 7. He continued to work through his teen years and became his family’s primary source of income when he took over management of the Keesler Air Force Base post exchange in Biloxi, Mississippi.

In high school, he was voted “Most Likely to Succeed” and his yearbook photo caption read, “No Coward Soul is Mine.” Afterwards, he entered the Army Specialized Training Program at Ole Miss and then New York University, where he studied electrical engineering.

During World War II, he was a sergeant in the U.S. Army, and from 1950 to 1965, he was a major in the U.S. Air Force Reserve. After his honorable discharge, he returned to Ole Miss to study law under the GI Bill.

At the university, Billingsley served on the Mississippi Law Journal and was a member of Sigma Chi fraternity and the Phi Alpha Delta law honor society.

He began a 33-year career with the Bell System in 1956 in the Western Electric Co. Legal Department and in 1958, he married Lee Brown, daughter of Walter L. Brown, then general counsel for Western Electric.

During his tenure with AT&T, Billingsley obtained FCC approval to offer the Advanced Mobile Phone Service, the technological precursor to today’s cellular communications networks. He also convinced the FCC to allow AT&T to enter new markets through a separate, largely unregulated subsidiary. He represented AT&T in negotiations with the FCC that established the framework for regulating the telecommunications industry following the 1982 consent decree that broke up the Bell System into seven regional systems.

Billingsley retired from AT&T in 1990 and devoted his time to family and travel. He was active in the lives of his children and eight grandchildren, skiing in Vermont and Colorado, sailing the Caribbean and Long Island Sound, going to baseball, football and lacrosse games, dance performances and school events.

An involved community member during his 55 years in Rye, Billingsley served on the boards of the Rye Free Reading Room and United Hospital and was a governor of Manursing Island Club and a trustee of Salisbury School.

To make a gift to the James R. Billingsley Third-Year Law Scholarship Fund, send a check with the scholarship name written in the memo line, to the University of Mississippi Foundation, 406 University Ave., Oxford, MS 38655; or online at https://give.olemiss.edu.

For more information on supporting the UM School of Law, contact Suzette Matthews, senior director of development, at suzette@olemiss.edu or 601-937-1497.