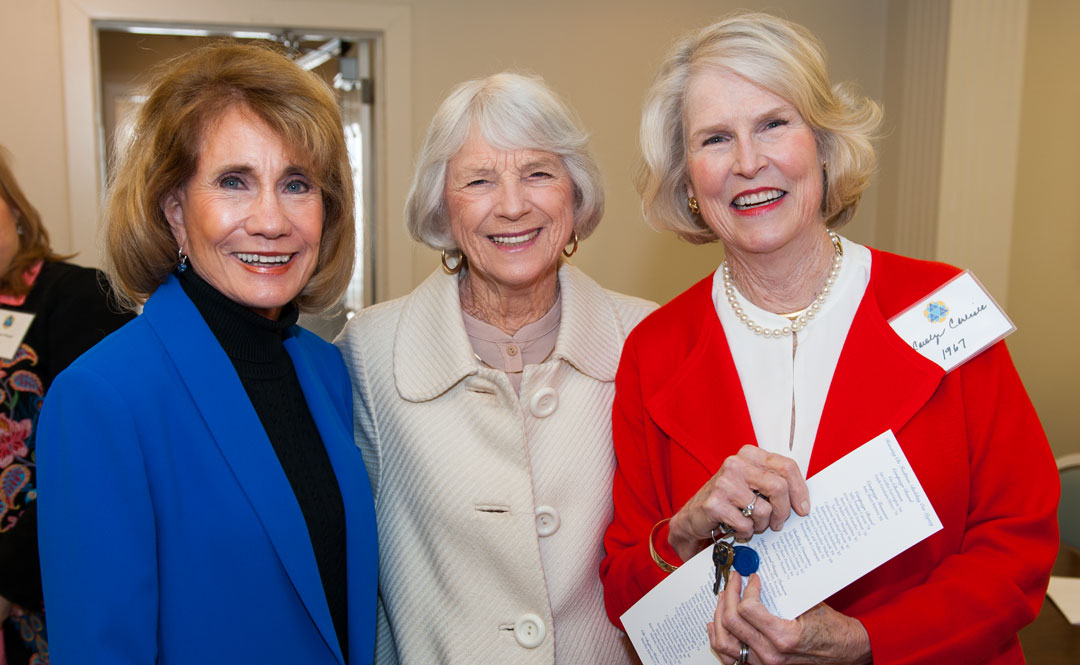 In the summer of 1953, Shirley Wagner left Grenada and headed 45 miles northeast to Oxford to enroll as a freshman student at the University of Mississippi. Along with her suitcase, she brought her skills in women’s basketball, the pep she exuded in cheerleading and her “joie de vivre,” as the French say, meaning “an exuberant joy of life.”

She immediately threw herself into the process of Ole Miss rush – now called recruitment – and joined Delta Delta Delta sorority, where she became a devoted member and alumna for life.

Who could have known the effect she would have for 60-plus years following her trip? Her infectious personality helped her make a tremendous impact on all who knew and admired her throughout her life.

“Shirley and I became friends in 1956 when I met her and Eddie for the first time,” UM Chancellor Emeritus Robert Khayat said. “For 64 years, we continued that friendship as it enriched with time and memories. She and Eddie became the ultimate Ole Miss couple, and with the arrival of Kim and Kip, the Ole Miss family.”

“She was enthusiastic about living, Ole Miss, her friends and sports … particularly football and baseball,” Khayat said. “She loved to cheer, applaud and celebrate success but deeply mourned loss and failure.

“However, her interests were not limited to athletics. A mainstay at the School of Business (Administration), she was a friend and counselor to generations of students and faculty members. She approached her work just as she lived: enthusiastically.”

Shirley was like a second mother, said Ken Cyree, dean of the Ole Miss business school.

“When I moved to Oxford in 2004, I was the banking chair,” Cyree said. “Shirley was my then-assistant, and I had some documents I needed filed. I asked her to file them, and she said ‘Oh, I don’t do that.’

“Another time, I was having a difficult issue with a faculty member. Shirley noticed I was upset and asked what was wrong. When I told her, she stood up, named the person, and said she would go and take care of it, gesturing with clenched fists that she was ready to fight.”

Her grit and determination were exemplified in many ways, including her refusal to go on a date with the man who would eventually become her partner in life, her beloved husband Eddie.

“I kept asking, and she kept saying no,” Eddie told Rick Cleveland, of Mississippi Today.

“Then, on a Saturday night at Tiger Stadium in Baton Rouge, his junior season, Crawford scored four touchdowns to help Ole Miss win a huge football game against LSU,” Cleveland wrote in July 2017. “That night, amid the wild, post-game celebration, Eddie asked Shirley still again for a date.

Her family, Ole Miss, First Presbyterian Church and her work were among many of her priorities and passions. And, then there were the legions of close friends and admirers – young and old – through her beloved sorority, Delta Delta Delta.

“Shirley is revered by generations of Tri Deltas and is remembered as a loving mentor, a trusted friend, an enthusiastic cheerleader, an ever-present supporter and an exemplary role model,” said Jan Farrington, who served as the president of the Tri Delta Foundation from 2006 to 2008 and also as the president of the Ole Miss Alumni Association in 1998-99.

“There is a Tri Delta scholarship named in her honor and, in 2004, the chapter room was named for her in recognition of her lifelong commitment to her beloved sorority.”

She will be missed by many Oxford residents and university associates from athletics, business, Greek life and the student body, many of whom remembered that she represented the good in all that she did and enjoyed.

“Shirley loved being the secretary to the chair of banking,” said longtime friend and fellow Tri Delta Mary Sharp Rayner, who served as president of the Ole Miss Alumni Association from 2003 to ’04. “She enjoyed the students who came by her office to talk or to get help.

“She was a wonderful mentor to so many business students as well as Tri Deltas, who she had in her home every year. There were very few university functions she didn’t attend. She and Eddie were always the university representatives at numerous funerals. Bottom line, she was a most important ‘face of the university.'”

Crawford touched many, many people during her lifetime, said Del Hawley, senior associate dean at the business school.

“My memories of Shirley will always be emblazoned with her ever-present smile,” said Hawley, who worked with her for 30 years. “Every day, day after day, and year after year, she was always a beacon of cheer and optimism.

“She was never down, cross or self-absorbed. I don’t think I have ever met a person with a more positive attitude, and I certainly have never met one who was a better example of what it means to be a good person. She set a shining example for me and for anyone else she met for how to be an inspiring, humble, caring, and compassionate human being.”

Sixty-seven years after her drive from Grenada to Oxford, Crawford’s “joy of life” still permeates the university and town.

Memorial contributions may be made to the Shirley Crawford Staff Excellence Endowment or the Ole Miss Women’s Council for Philanthropy Shirley Wagner Crawford Council Scholarship Endowment, both through the UM Foundation, 406 University Ave., Oxford, MS 38655. Contact Angela Brown, senior director of development for the School of Business Administration, at browna@olemiss.edu.