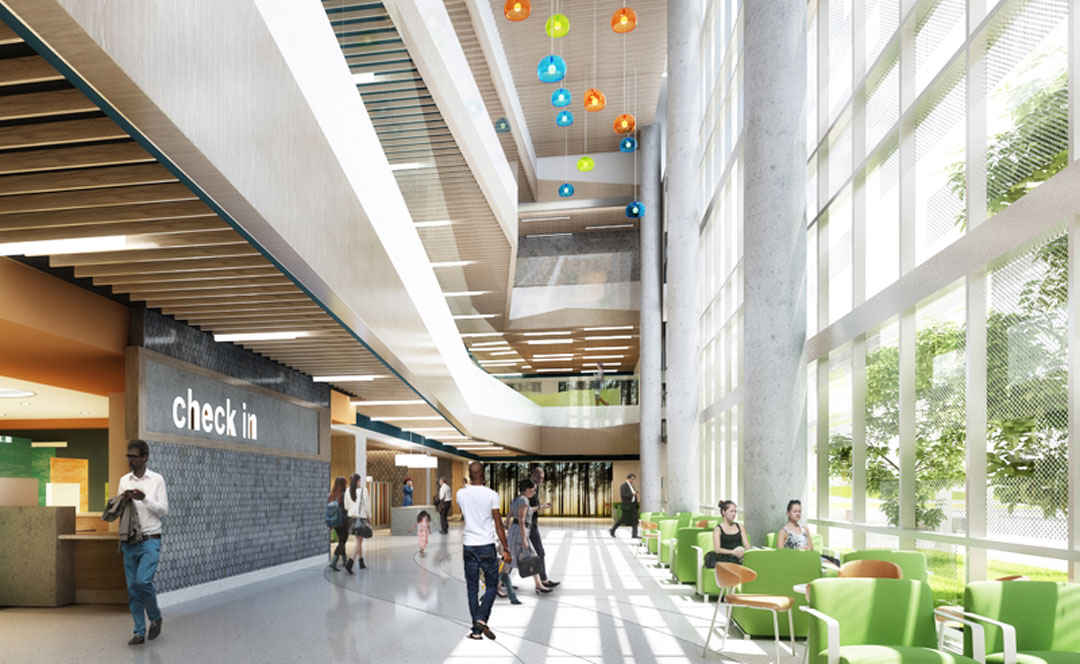 The Children’s of Mississippi seven-story expansion will bear the name of the couple whose philanthropy and leadership made it possible: Kathy and Joe Sanderson.

The Kathy and Joe Sanderson Tower at Children’s of Mississippi more than doubles the square-footage of pediatric hospital space at the University of Mississippi Medical Center. It will join the Blair E. Batson Tower, named for UMMC’s first pediatrics chair, as an integral part of the state’s only children’s hospital.

The name was revealed during a virtual event for donors to the Campaign for Children’s of Mississippi, the philanthropic drive to raise $100 million to bring the expansion to completion. The Sandersons launched the campaign with a $10 million personal gift and are chairing the effort. So far, more than $83 million has been donated to the campaign.

“There is no more fitting name for this children’s hospital expansion than the Kathy and Joe Sanderson Tower,” said Dr. LouAnn Woodward, vice chancellor for health affairs and dean of the School of Medicine. “Without their leadership, generosity and care for the children and families of Mississippi, this expansion would still be on the drawing board.”

Seeing this expansion go from a need to a tower has been gratifying, said Joe Sanderson, CEO and board chairman of Sanderson Farms, a Fortune 1000 company headquartered in Laurel.

The company is the title sponsor of Mississippi’s PGA TOUR event, the Sanderson Farms Championship, which has raised more than $7.6 million to benefit the children’s hospital since 2013.

“We know the importance of the children’s hospital to the families of Mississippi, and we knew the need for an expansion,” he said. “This expansion will ensure better outcomes for children, but also better research now and research that hasn’t even been thought of yet. It will bring more doctors to the state, and more jobs.”

The Sandersons found out just how important having a children’s hospital is when their granddaughter, Sophie Creath, needed care from Children’s of Mississippi for pancreatitis as a young child.

“Sophie was in severe pain,” said Kathy Sanderson, “but she was never afraid because of the extraordinarily competent and very loving care she received. That all the children in Mississippi can receive this kind of care here warms my heart.”

When it opens for patient care, the $180 million tower will transform pediatric care in the state, said Dr. Mary Taylor, Suzan B. Thames Chair, professor and chair of Pediatrics.

“Our medical team will soon have a children’s hospital that matches their expertise,” she said. “The Batson Tower will continue to be a key part of pediatric care in the state, and with this expansion, care there will be even better.”

The Sanderson tower will include a dozen state-of-the-art surgical suites as well as 32 private pediatric intensive care rooms. For the smallest and most critically ill infants in the state, the expansion will have 88 private neonatal intensive care rooms where parents can stay with their babies as they grow stronger.

A pediatric imaging center, a first for the state, will offer MRI and CT scans in a child-friendly area.

Woodward said the towers, one named for a medical leader and the other for a leader in business, symbolize what can be achieved when medicine and philanthropy work in concert.

“This is a shining example of what can be achieved when leaders from across the state come together in support of the health of our children,” she said. “Hope is bright for what the future of pediatric care holds for Mississippi.”