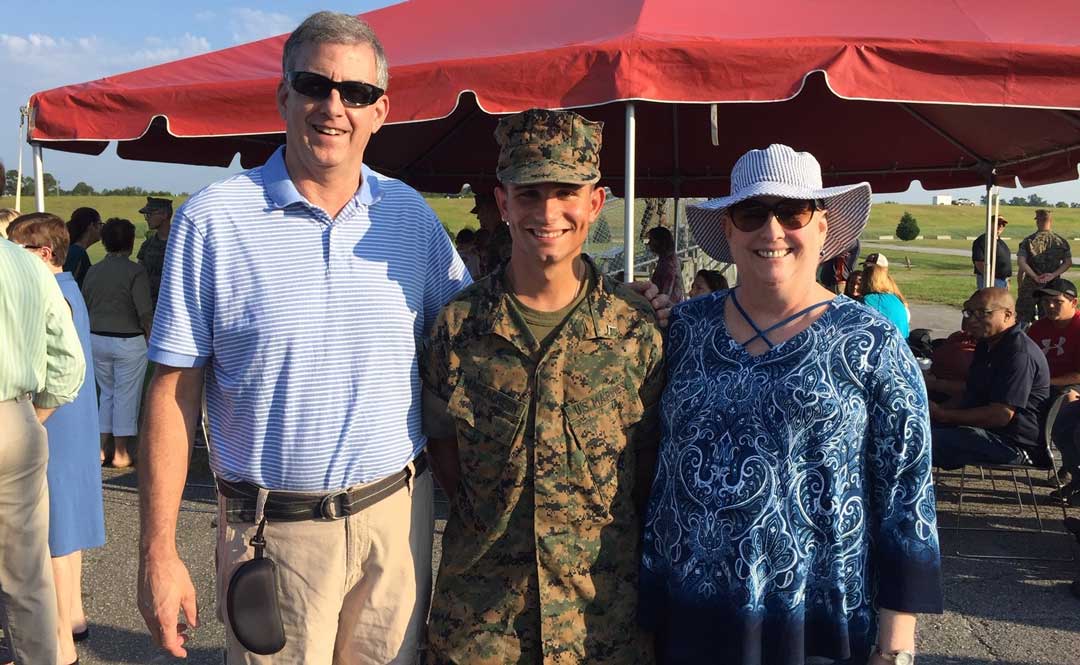 The life and work of the late Jane MacEachern, right, is being honored by her husband and son, Doug and Taylor MacEachern, with a scholarship in her name at the University of Mississippi School of Pharmacy. The 1980 Ole Miss pharmacy alumna lost her personal battle with cancer but not before devoting her 39-year professional career to the fight through research and drug trials. Now Ole Miss pharmacy students will benefit from her scholarship.

Armed with a University of Mississippi education, School of Pharmacy alumna and cancer survivor Jane MacEachern devoted her professional career to the fight against cancer through research and drug trials.

The scholarships will provide support to students in UM’s School of Pharmacy Professional Program, reflecting Jane MacEachern’s values and longtime commitment to her alma mater.

“We are extremely grateful at the School of Pharmacy for Doug’s generosity and support in this endowment,” said David Allen, dean of the school. “Jane’s dedication and service to the school, as well as her spirit and compassion, will carry on as it assists our students with financial needs.”

During high school, MacEachern began her first of three personal battles with cancer. While undergoing treatment, she continued twirling her batons for George County High School in her native Lucedale, Mississippi, earned a position in the Mississippi All-State Band and served as pianist and organist for the First Methodist Church of Lucedale.

MacEachern earned a Bachelor of Science in Pharmacy degree in 1980. After receiving a Doctor of Pharmacy degree from the University of Tennessee, she devoted the majority of her 39-year professional career to designing and implementing oncology drug trials while associated with GlaxoSmithKline and Eisai.

“Jane absolutely loved her career in research. She was able to see the big picture when not everyone did. Being a cancer survivor from a young teen, she was able to see things from a perspective that others could not,” said Doug MacEachern of Covington, Louisiana.

“She was diligent and compassionate and always stood up for what was right.”

The couple’s son said his mother’s focus was on service to individuals living with cancer.

“My mom was always willing to get involved, helping to determine a course of action for those who might otherwise be lost in the nightmare of a cancer diagnosis,” said CPL Taylor MacEachern, U.S. Marine Corps.

After graduating and beginning her career, she was an active member of the Ole Miss Alumni Association and served as president of the Pharmacy Alumni Chapter’s board of directors. She passed away in May 2019.

“From a very early age, Jane had her sights set on attending the university. She considered attending medical school at first but chose the path of pharmacy for her career,” said Doug MacEachern of his wife – whose father, the late Horace Bradley, was an Ole Miss School of Accountancy graduate. “So many times, she would say how happy she was to have made the right choice.

“The University of Mississippi was the enabler for Jane to reach her first goal of receiving an undergraduate in pharmacy. Our son, Taylor, and I want other students to have the opportunities afforded her.

“We want this endowment to serve as an enabler to achieve dreams and goals for students in the future,” her husband said.

Port Kaigler, director of development at the UM School of Pharmacy, described the MacEacherns’ gift and the late MacEachern’s life as a beacon to Ole Miss students.

“While I never had the opportunity to meet Jane, after reading about her life and her work in designing and implementing oncology drugs and speaking with Doug, I quickly got a sense of how remarkable she was.

“Thanks to the generosity of Doug and Taylor in establishing this endowment in her memory, Jane’s passion to help others will continue by truly impacting the lives of scholarship recipients.”

The Jane B. MacEachern Memorial Pharmacy Scholarship Endowment is open to support from businesses and individuals. Gifts can be made to by sending a check to the University of Mississippi Foundation, with the fund’s name noted on the memo line, to 406 University Ave., Oxford, MS 38655 or by giving online at https://give.olemiss.edu.

For more information about supporting the School of Pharmacy, contact Port Kaigler at port@olemiss.edu or 662-915-2712.