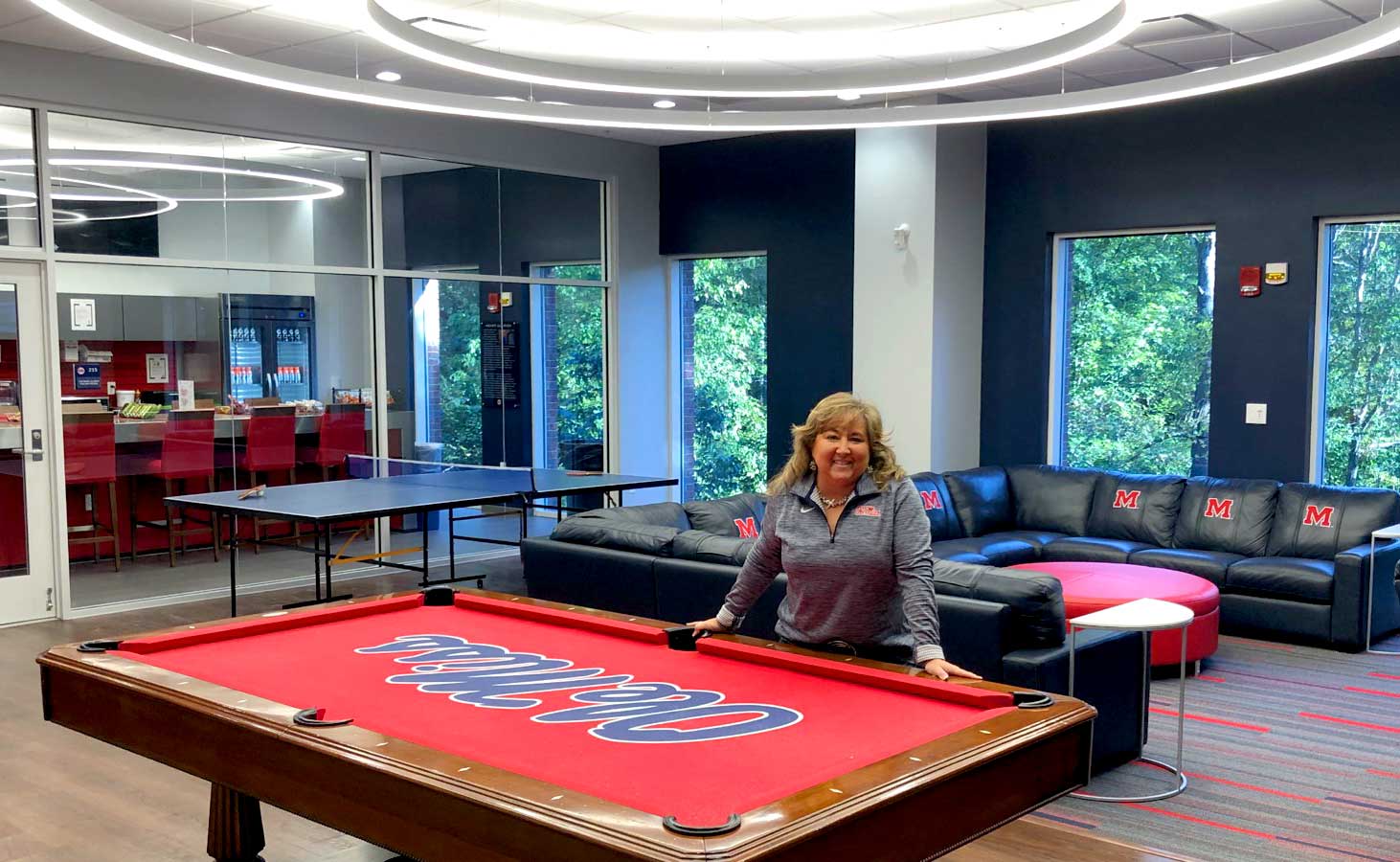 Evelyn Johnson takes a look at the new players' lounge for Ole Miss Baseball that will bear her family name.

When Evelyn and Jeff Johnson saw the remarkable result of her gift to Ole Miss Football, they decided Ole Miss Baseball needed one too.

A $500,000 gift from the Monroe, Louisiana couple, enabled the University of Mississippi to construct a contemporary lounge space for Rebel football players. And the resulting dynamic was instantly obvious.

“Athletes of any team sport develop a sense of unity as they work together toward the common goal of winning the game,” said Keith Carter, vice chancellor for intercollegiate athletics and Rebel basketball All-American.

“As our football players began to enjoy the space created by the Johnsons’ generous gift, we noticed them bonding as never before. This stronger cohesiveness will translate to better performance on game days.”

The team lounge, which features big-screen televisions, video game systems, pool and ping-pong tables, and cushy recliners and sectionals — all branded with UM colors and logos — was such a hit that the Johnsons made a second $500,000 gift to create a similar space for Ole Miss baseball players.

“Watch our players during games; they have a noticeable camaraderie,” said Ole Miss head baseball coach Mike Bianco. “Having this amazing space to relax together enables them to carry that feeling off the field and continue it in their daily lives. It strengthens their bond with each other and ultimately helps them work better together.”

Bianco and the Johnsons have become friends.

“I feel honored to know Ev and Jeff and I am extremely grateful for their encouragement, loyalty and generosity,” said Bianco, who was named 2020 National Coach of the Year by Collegiate Baseball. “I know our student-athletes would agree that this fantastic players’ lounge is most definitely a win for our program.”

Knowing the students appreciate and enjoy these spaces is rewarding to the Johnsons.

“They’re making some great memories both on and off the field, and that makes me very happy,” Evelyn Johnson said. “If our gift helps players form lasting friendships while also competing better together, then we feel we’ve made a positive difference.”

The player lounges at Vaught-Hemingway Stadium and Oxford-University Stadium-Swayze Field have both been named in honor of the Johnsons whose children Drew and Abigail graduated from Ole Miss in 2017 and 2019 respectively.

Drew Johnson, who earned a bachelor’s degree in business administration, worked for his fraternity’s national office for two years and is now attending UM’s MBA program. He recently became the youngest member of the Vaught Society, a fund-raising body that supports Ole Miss Athletics.

Abigail Johnson earned a bachelor’s degree in applied sciences, specializing in dietetics and nutrition. After college, she moved to Atlanta for a one-year dietetic internship through Life University. She has recently moved back to Oxford where she is working on her master’s degree in nutrition through the University of Alabama as she pursues a career as a dietitian.

Jeff Johnson is executive vice president and COO at Scott Powerline and Utility Equipment in Monroe, LA. He graduated from Louisiana State University-Shreveport in 1990 with a bachelor’s degree in secondary education and teaching. He then joined the U.S. Army, serving as a field artillery officer for three years.

In 1994, he was hired by his wife’s grandfather to serve as Human Resource Manager for their family business, Scott Equipment Company and made the move to Scott Powerline & Utility Equipment, a spin-off of the parent company, in 2000. In his 20-plus years with the company, he has also worked as collector/credit manager and sales manager.

Evelyn Johnson attended the University of Mississippi but graduated from Kansas State University after getting married her senior year. She is actively involved in her community, serving on a number of charity foundations and boards. Recently, the UM Delta Rho chapter of Kappa Kappa Gamma, her daughter’s sorority, initiated her as an alumni initiate.

Ian Sadler, director of development for major gifts, said the Johnsons are friends of Ole Miss Athletics in every sense of the word.

“Their hearts are always for the student-athletes and the success of Ole Miss,” he said. “They care so much about the players and they just want them to have the best possible experience at Ole Miss. Likewise, they think so highly of our program that they want to do whatever they can to elevate it.

“They embrace the individuals who make Ole Miss so special – the coaches, the administrators, the players. By supporting the individuals, they are elevating our beloved Ole Miss.”