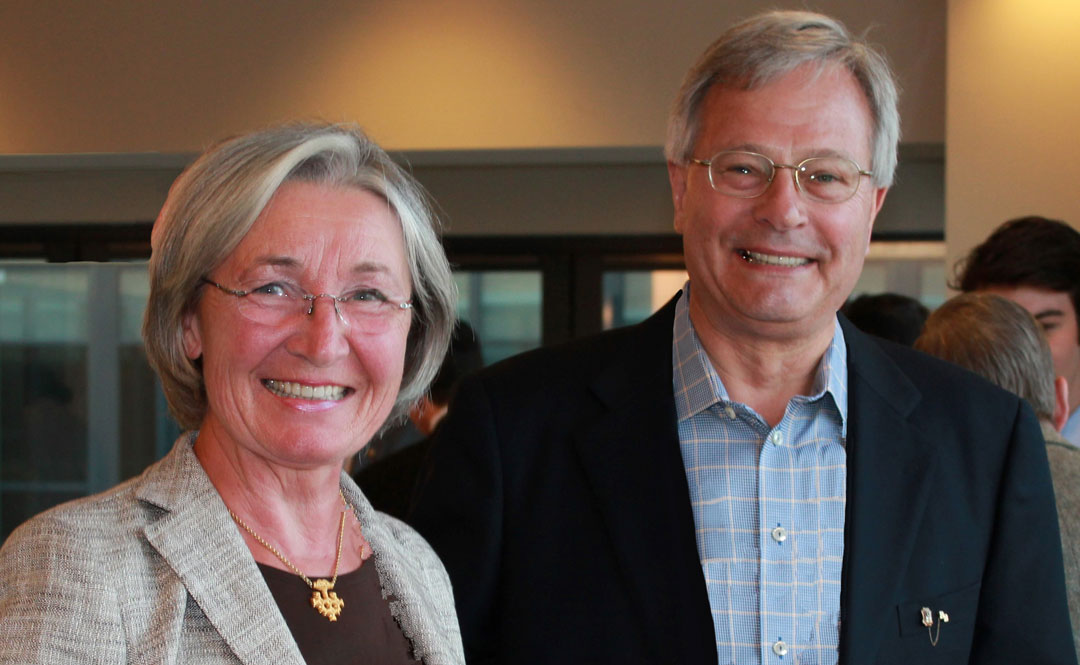 Traute and James Langmesser of Alexandria, Virginia, have committed an unrestricted $1 million gift to the UM College of Liberal Arts, strengthening such areas as graduate student support, faculty support and facility modernization. James Langmesser, a native of Chicago, Illinois, studied university catalogs to choose his college home, and his younger brother also graduated from Ole Miss.

James Langmesser – who, with his wife, Traute, has committed a $1 million planned gift to the University of Mississippi – becomes reflective and animated when talking about the course offerings he encountered as a student on the Oxford campus.

“It was a veritable feast to look at all the courses I could take,” said the retired military leader and business executive who has lived and traveled all over the world. “I enrolled in wonderful courses. The professors were exceptional and prepared us well.”

In an amusing incident, when the Chicago, Illinois, native took a course closer to home one summer, a fellow attending student from the University of Michigan made a condescending remark about him being from Ole Miss. In response Langmesser decided to push the grading curve so high with his academic performance that everyone in the class would remember the quality of his UM schooling.

After one class near the end of the course he shared a bus ride with the Harvard University-trained professor teaching the comparative European government class. The instructor asked if his academic performance would be considered normal for an Ole Miss student. Langmesser’s response was, “Of course.”

The 1969 graduate in English and history, who also holds a master’s degree from Pepperdine University, and his wife have designated their gift as unrestricted for UM’s College of Liberal Arts, meaning leadership can use the gift to address the college’s greatest needs.

“The University of Mississippi is a place that enriched my life, and I want to help those students who follow me,” Langmesser said. “We made the gift unrestricted because the dean wouldn’t be the dean if he didn’t know the gift’s best use. That’s why you have good people.”

His strong commitment to his alma mater and educational opportunities is shared by Traute Langmesser, who herself was an educator in the German school system. She remembers visiting the Oxford campus and sharing some wisdom with a group of students the couple encountered in the Circle.

“Look around – see all this,” she said referring to the academic buildings and the library, the “intellectual heart” of a university. “You didn’t build it but you are going to be responsible for sustaining it.”

Traute Langmesser’s professional career was centered in education, serving as principal of a high school in the German state of Baden-Wuerttemberg. During her 30-plus-year educational career, she held many challenging positions and was co-author of a geography textbook used in the state school system.

Chancellor Glenn Boyce applauded the couple for their generous gift and deep commitment to the university.

“Jim Langmesser charted his own course to identify his college home, looking for a strong academic environment and scholarship support. We deeply appreciate his and Traute’s decision to pay it forward and impact our academic community and Ole Miss students in such a meaningful way,” the chancellor said.

“Through the Langmessers’ investment in our university, we will be able to strengthen the College of Liberal Arts and our ability to attract and retain highly talented faculty, researchers and students.”

Lee Cohen, dean of liberal arts, expressed his appreciation to the couple for the unrestricted gift, trusting in leadership to use it wisely.

“We thank Traute and Jim for this extraordinary gift which will be directed toward faculty support, graduate student support, and facility improvements and modernizations,” the dean said. “By focusing on each of these areas, we strengthen the university’s R1 research classification, impacting how government officials, independent analysts and academic groups perceive our institution.

“The UM College of Liberal Arts would not be able to offer all the exceptional educational opportunities we do without our generous supporters, who help us create an environment where liberal arts students and scholars can do outstanding work.

In the 1960s, Langmesser’s decision to choose UM for his college home was made by studying university catalogs to identify scholarship opportunities.

“Ever since I was a little kid, I was acutely aware of how much things cost and wanted to stay out of debt. I thought about my family’s financial situation and just decided I was going to have to do college on my own,” said Langmesser, who started communicating with Ole Miss as a high school junior and earned both scholarships and an out-of-state fee waiver. He later received a two-year ROTC scholarship.

His brother, Thomas, also followed him on scholarship and completed a degree in German. The two grew up in a home where, for entertainment, they read the Encyclopedia Britannica every night and visited the public library often.

Langmesser’s first wife, Helga, was a native of Germany, and after her death, he wed Traute, also from Germany. How he and Traute met is a story in itself; they share the same ancestor from Prussia circa 1795.

The two are lifetime learners and travel the world extensively with the same philosophy: know the history of a place and never travel with groups.

“If you don’t know the history and the literature you might as well stay home and watch a video,” said Traute Langmesser, who like her husband is a photographer. “We want to meet local people and have the experience of talking with them.”

Nikki Neely Davis, a UM executive director of development, said she is always amazed by the Langmessers.

“I’ve known the Langmessers since I first began working for the university, and from day one I found their love of learning and belief in the power of education inspiring and encouraging. I’ve never left a visit with the couple without a book recommendation or new knowledge.

“I am grateful for the opportunities I’ve had to get to know them and also for their investment in the College of Liberal Arts. There is no doubt that their generosity will have a positive impact on deserving students for years to come.”

James Langmesser was commissioned as a second lieutenant in the Ole Miss ROTC in July 1969, and went on to serve in the U.S. Army Europe’s 66th Military Intelligence Brigade, the U.S. Forces Korea’s 36th Signal Battalion as Logistics Officer, and then as the battalion’s 501st Signal Company Commander. He was then reassigned as the Signal Officer of the 2nd Armored Cavalry Regiment’s 1st Squadron which patrolled the then West German-Czechoslovak border. He then served in the Pentagon in Washington, D.C., before a six-year assignment in Germany in 5th Signal Command Headquarters in Worms, and as the 2nd Signal Brigade Deputy Commander in Mannheim, Germany.

Langmesser’s final two assignments were as battalion commander of the 360th Signal Battalion at Ft. Gordon outside Augusta, Georgia – home of the U.S. Army Cyber Center of Excellence – and as the Deputy Chief of Staff for Information Management for the Army’s Criminal Investigation Command in Washington, D.C.

Langmesser authored the resource book “History of the 382nd Anti-Aircraft Artillery (AW) Battalion,” which is in the holdings of the Army War College’s Military History Institute. He wrote the book to honor the unit his father served in during World War II. He also did the photography for and wrote articles for the magazine Roman Coins and Culture in 1986.

After retiring from the Army, Langmesser joined CALIBRE Systems in Alexandria, Virginia, as a principal, and held the position of director of Strategic Decision Support, first supporting the Department of Defense’s and then the Army’s chief information officers. For the majority of his 17 years with CALIBRE he worked directly on site with customers. The scope, magnitude and complexity of the projects he was involved with were for him memorable and challenging, he said.

For more information on supporting the College of Liberal Arts, contact Nikki Neely Davis, executive director of development at nlneely@olemiss.edu or 202-215-5534 or visit give.olemiss.edu.