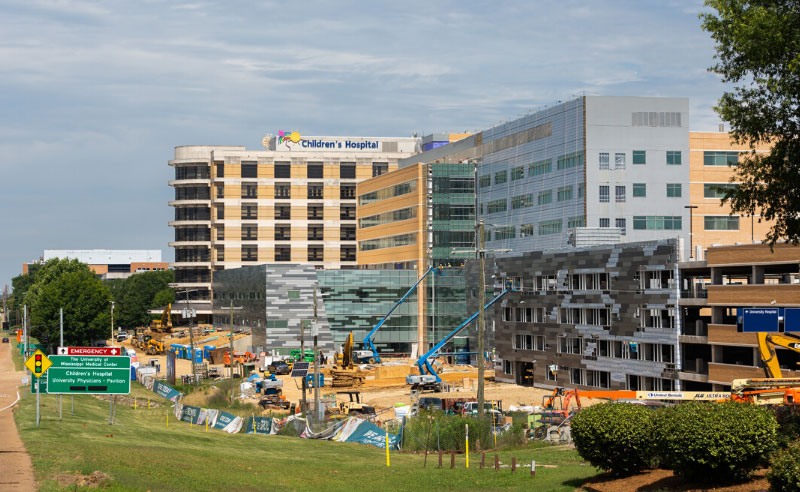 The Children's of Mississippi seven-story expansion will include the Bob Bird Discharge Lobby, thanks to a $1 million gift from the Joseph C. Bancroft Charitable and Educational Fund.

Thanks to a $1 million gift from the Joseph C. Bancroft Charitable and Educational Fund, patients of Children’s of Mississippi and their families will receive a send-off as hospitable as their welcome to the state’s only children’s hospital.

The seven-story children’s hospital expansion at the University of Mississippi Medical Center will now include the Bob Bird Discharge Lobby, a place where families can prepare comfortably for going from hospital to home.

“One of the Bancroft Fund’s core values is improving the health of Mississippi’s children,” said Gerald M. Abdalla, director of the McComb-based nonprofit. “This gift will honor one of the Bancroft Fund’s leaders, Bob Bird, as well as help families heading home from the hospital with a transition space that will give a good start to their children’s follow-up care.”

The Bob Bird Discharge Lobby will be a comfortable spot where discharged patients can wait for transportation, medications, car seats or other needed equipment before going home.

Dr. LouAnn Woodward, vice chancellor for health affairs and dean of the School of Medicine, said the Bancroft Fund’s donation to the Campaign for Children’s of Mississippi will make the new children’s hospital tower a much more accommodating space for patients and their families.

“Mississippi is known for its hospitality,” Woodward said. “In the Bob Bird Discharge Lobby, our patients and their families will be able to transition to going home with the comfort and reassurance they need.”

A patient’s care at Children’s of Mississippi includes clinic visits and care instructions for home as well as inpatient care, said Dr. Mary Taylor, Suzan B. Thames Chair, professor and chair of pediatrics.

“Going home from the hospital is as much a part of a child’s health care as their treatment in the hospital,” Taylor said. “We want families to leave with the confidence they need to administer medications, take their children to follow-up visits with specialists and help their children get well soon. The Bob Bird Discharge Lobby will give us the space for this to happen.”

Children’s of Mississippi is the pediatric arm of UMMC that includes the state’s only children’s hospital.

The expansion will include two floors with private neonatal intensive care rooms where families can bond with their critically ill newborns. A dozen state-of-the-art surgical suites and 32 private pediatric intensive care rooms will be available for patients at a moment’s notice. An imaging center designed for children and a pediatric outpatient specialty clinic are also included in the tower, and a 517-space parking garage will be located conveniently nearby.

Under construction since early 2018, the children’s hospital expansion will open this fall.

The building of a tower that will more than double the space devoted to pediatric care at UMMC is a cause that aligned with the Bancroft Fund’s history of philanthropy.

“The Bancroft Fund has been heavily involved with Children’s of Mississippi during the past 24 years,” Abdalla said. “This included the Fund’s $2.5 million gift to renovate the Croft Pediatric Intensive Care Unit in 2009, which provides care to the state’s most critically ill and injured children.”

The Bancroft Charitable and Educational Fund was formed in 1996 upon the death of Joseph C. Bancroft, founder of Croft, LLC, a manufacturer of vinyl and aluminum windows and doors. The McComb-based nonprofit supports charitable and educational programs by offering financial support, leadership and guidance to qualifying organizations within the state of Mississippi.

Bob Bird has been involved with Croft since 1985, when he was an audit partner with PricewaterhouseCoopers. For 11 years he was in charge of Croft’s annual audit. After Bancroft’s death, Bird became chairman and president of the Joseph C. Bancroft Charitable and Educational Fund. He continues to serve today as a director of the Bancroft Fund.

“Bob’s service to Croft and the Bancroft Charitable Fund spans 35 years and is ongoing,” Abdalla said. “His name being given to an area where children will transition to home from a hospital stay is an honor that reflects his values.”

To support the University of Mississippi Medical Center, visit http://www.umc.edu/givenow/ or contact Meredith Aldridge, associate executive director of development, at 601-984-2841 or mmaldridge@umc.edu.