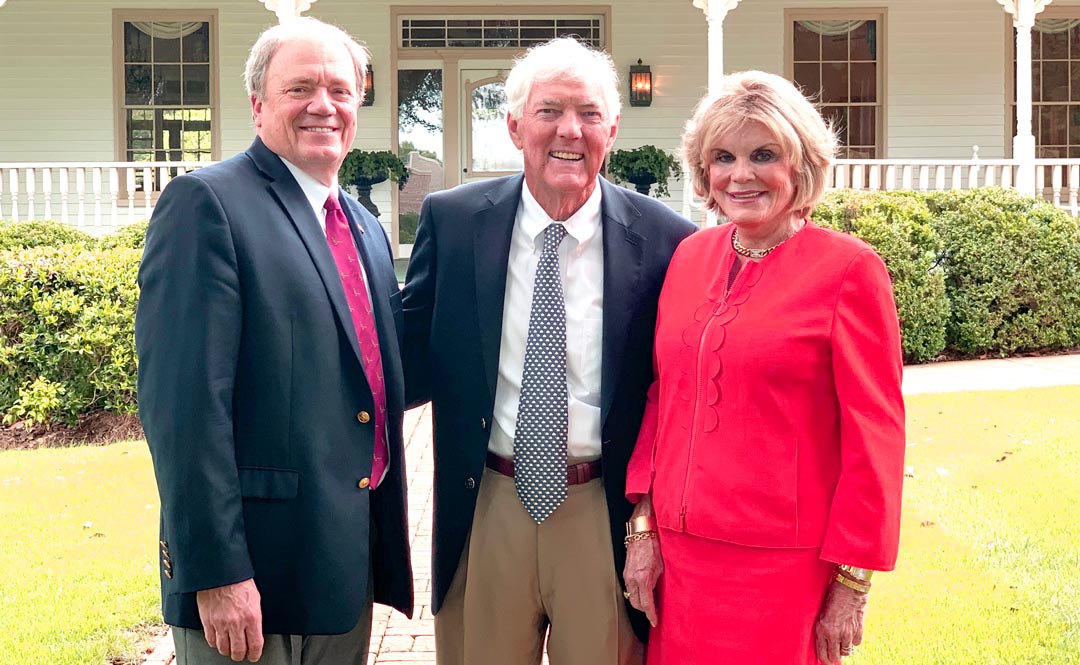 Louis Brandt, center, has become the inaugural emeritus board member of the University of Mississippi Foundation (UMF), an honor that reflects his longtime service to and support of his alma mater and the foundation. With him are, left, Wendell Weakley, UMF president and CEO, and Suzan Thames, UMF board chair.

Business leader and philanthropist Louis Brandt of Houston, Texas, has been named the inaugural emeritus board member of the University of Mississippi Foundation, reflecting his longtime contributions to the organization and his alma mater.

Brandt was elected to the honorary position by other board members to recognize his 30 years of involvement and alumni leadership with the UM Foundation and the major impact he has made through his support of university programs.

“Louis Brandt is deeply invested in the University of Mississippi,” said Suzan B. Thames of Jackson, Mississippi, chair of the UM Foundation board of directors. “He has demonstrated extraordinary commitment from playing a pivotal role in providing the UM Foundation’s physical home to supporting academics and athletics.

“Louis is a stellar ambassador of our university, and as a UM Foundation board member, he provided knowledgeable, wise and thoughtful guidance as the foundation grew to support a major university. Honoring him with emeritus status is one way of thanking him for the significant contributions he has made,” she said.

Brandt provided the funds in 1992 to purchase Memory House from the John Falkner family of Oxford. After the home underwent extensive renovations, it was renamed Brandt Memory House in his honor in 1995. The facilities are utilized daily for UM Foundation business, university meetings, donor events and university-wide activities, becoming an indispensable part of the life of the university.

“My association with the University of Mississippi Foundation and its staff over the years has been the highlight of being an Ole Miss alumnus, and this emeritus honor is the capstone,” he said. “This, in addition to having my name associated with the Memory House, the foundation’s home, has made me very proud.”

Among Brandt’s service commitments to the UM Foundation, Brandt was chairman of the board, as well as a member of the Joint Committee on University Investments and the foundation’s Executive Committee. Wendell Weakley, foundation president and CEO, said Brandt’s integrity, vision and leadership has made a lasting impact on both the university and foundation, which has an endowment of more than $700 million.

“It continues to be an outstanding experience to work with such a deeply committed board member as Louis Brandt,” Weakley said. “Louis has always possessed an incredible understanding of higher education – perhaps from growing up in our college town and listening to his father, who was an Ole Miss economics professor – and offered his astute business perspective.

“Capable and accomplished women and men in the fields of finance, investment, law, education, health care, business and more serve on our board, bringing a collective of talents, strategy, guidance and financial support to the table. Louis is our first emeritus board member because he has been engaged in the mission of the foundation for years, not only supporting our work but also challenging us to always build a university for generations to come.”

A former UM tennis team member and mathematics alumnus, Brandt practically grew up on campus with his dad on the faculty. Because he has enjoyed playing tennis for more than seven decades, he and Lucia, his wife, provided a gift that helped jump-start construction on the $11 million, 52,000-square-foot Galtney Indoor Tennis Complex dedicated in 2019.

“Athletics has always been part of my life,” Brandt said. “Through college athletics, people are brought back to campus and are able to stay connected. That’s extremely important to a university.”

“Lucia, who is a University of Texas alumna, is very supportive of the love I have for Ole Miss,” said Brandt. “The University of Mississippi is my number one charity. I’ve watched others make major commitments to Ole Miss, and I’ve reached a point in my life to likewise dedicate these funds.”

Louis Brandt’s business career has been centered in Texas, where he is active with three companies, BMA, Ltd., Brandt Interest Ltd. and Timberwilde, Inc. and has served on an array of boards. He has also invested in three Oxford-based companies; he and his wife enjoy a second home in Oxford.

In addition to an undergraduate degree from Ole Miss, he holds an electrical engineering degree from University of Texas. He invented a machine to separate solids from liquids during drilling, which was the basis for The Brandt Company, one of his enterprises that he later sold to TRW Inc. Brandt was inducted into UM’s Alumni Hall of Fame in 1993 and is the father to three sons.

To learn more about the University of Mississippi Foundation and ways of supporting the university, visit www.umfoundation.com.