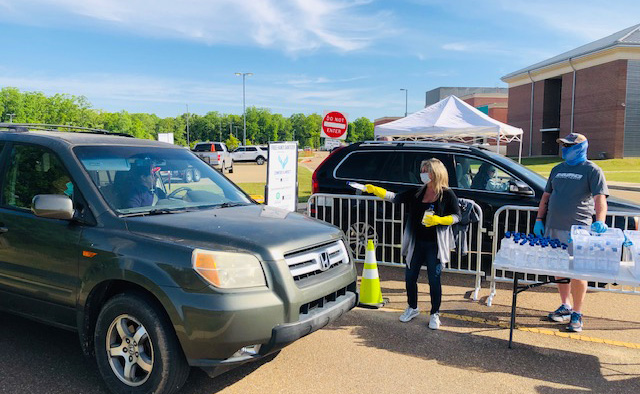 The Southern Foodways Alliance (SFA) at the University of Mississippi received a major gift from the founders of Mississippi-based Cathead Distillery, whose efforts during the COVID-19 crisis are making statewide impact.

The $75,000 gift from Cathead owners Austin Evans and Richard Patrick will support the writing, editing, and sharing of 15 essays on the contemporary South from members of the creative community and the food and beverage industry.

“We strongly value the work of the Southern Foodways Alliance and what it does for the Southern community,” Patrick said. “We hope our gift will help achieve long-term sustainability and overall increased knowledge about the industry.”

These essays will stare down the realities of life in the contemporary South and gesture to the future of the region, said SFA director John T Edge.

“Writers will not sidestep the pandemic and its effects, but they will also tackle other issues and highlight bold solutions,” he said. “We intend to do work that makes clear what’s at stake. And what’s possible.”

The SFA had announced its 2020 focus — to document, study and explore the future of the South — even before the region began to struggle against challenges presented by COVID-19.

“Now, more than ever, conversations around the evolving South are important,” Patrick said.

“Cathead’s desire to support our mission at this critical time inspires us,” he continued. “From the launch of their company, Richard and Austin and the Cathead team have invested generously in the cultural assets of Mississippi, and SFA has benefited greatly from their philanthropy. In this trying time, their new commitment signals that the documentary and narrative work SFA does will endure. For that we are thankful.”

Nikki Neely Davis, executive director of development at the University of Mississippi, said she has greatly enjoyed getting to know the Cathead founders and thanks them for their ongoing commitment.

“One incredible quality about Austin and Richard is that they’re beyond generous and don’t expect anything in return,” Davis said. “They are gracious people who want to do good work and make a difference. They’re an important presence in our state.”

As the pandemic spread this month, Mississippians witnessed Cathead’s humanitarianism in communities throughout the state, including Oxford — the SFA’s headquarters and the university’s home.

Recognizing a critical, immediate need, Cathead made the quick decision to begin producing hand sanitizer. Utilizing its resources, including a bottling line, labeling machine and plenty of alcohol (the main ingredient in hand sanitizer), the small craft distillery redirected its production from spirits to hand sanitizer within a matter of days.

The company contacted and partnered with nearly a dozen municipalities throughout the state to provide citizens over 27,000 bottles of free hand sanitizer with more to come.

“What this young company is doing in Mississippi is so important, not only with the hand sanitizer donations, but also in creating jobs and giving back, especially in a time that is so uncertain,” Davis said.

To make a gift to the Southern Foodways Alliance, visit https://give.olemiss.edu or contact Davis at 662-915-6678 or nlneely@olemiss.edu.

The name “Cathead,” a term first coined by Mississippi blues musicians as a nod to respected artists, is the brand’s way of paying homage to the state’s rich musical heritage; in this spirit, Cathead also donates a portion of proceeds to nonprofits that contribute to the region’s abundant arts and culture. The brand was recognized by the James Beard Foundation as a semifinalist for Outstanding Spirits Producer in 2020.