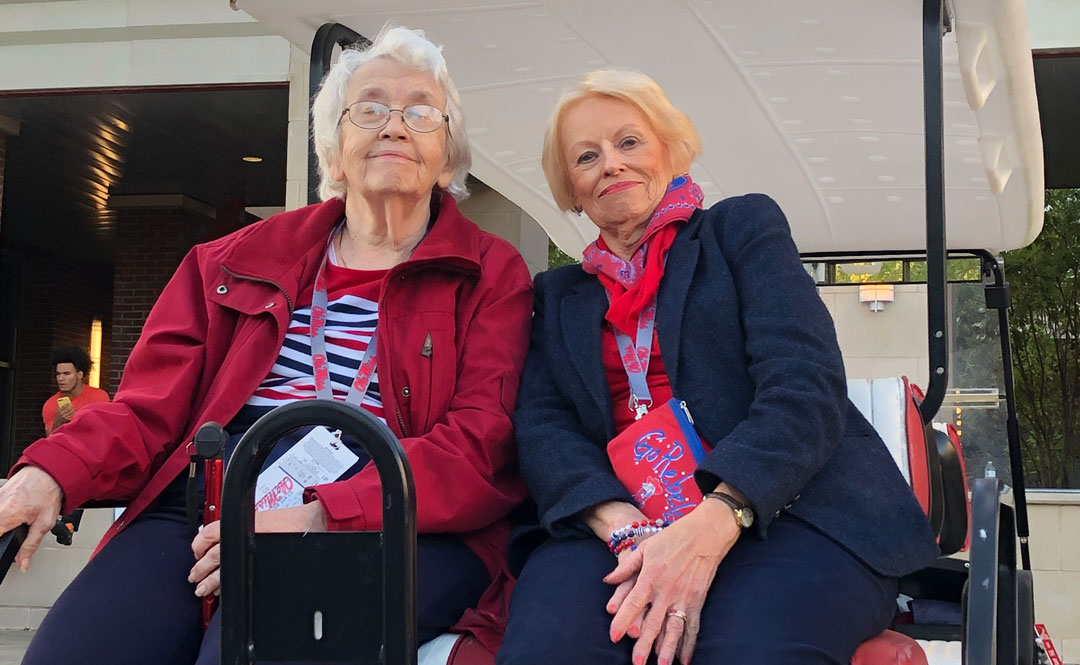 A gift to the University of Mississippi will provide scholarships for math and chemistry majors while memorializing the 55-year marriage of a couple who met over breakfast on the Oxford campus.

Established with a gift of $250,000, the Millie Nichols and Orga V. Craig Memorial Scholarship Endowment will benefit freshmen seeking degrees in the university’s science, technology, engineering and mathematics (STEM) program.

The late O.V. Craig of Kingwood, Texas, grew up on a cotton farm as a sharecropper in Olive Branch, Mississippi — raised by his mother and step-father who struggled to make ends meet after his father had been killed in an electrical accident. College would have been unobtainable for Craig if not for the generosity of a local man who provided financial assistance to orphans in DeSoto County, Mississippi.

“He was always grateful, crediting that scholarship as the means to escape the extreme poverty he endured as a young man,” said David O. Craig of Klein, Texas, the Craigs’ elder of two sons. “Our father was always a very generous person, both with his time and money, and he always had a special place in his heart for those who came from nothing.”

As their father neared the end of his battle with Alzheimer’s disease in December 2017, David Craig and his brother, Dr. Brian N. Craig of Beaumont, Texas, encouraged their mother to create the named endowment, enabling generations of deserving students to be able to attend Ole Miss.

“Essentially, we’re hoping to give bright students an opportunity to attend the University of Mississippi who may not have the financial resources,” said Millie Craig, who was raised in the Mississippi Delta.

College of Liberal Arts Dean Lee Cohen expressed gratitude for the Craigs’ gift, which will be attractive to students who want to enroll in the university’s new STEM facility – the Jim and Thomas Duff Center for Science and Technology Innovation.

“We are excited about the opportunities the new STEM building will give our students. Private support like the Craigs’ gift makes it possible to attract the best and brightest scholars to take advantage of our program’s state-of-the-art offerings,” Cohen said.

“We are grateful for their generosity in making this gift, which will be rewarding to both students and their spheres of influence down the road.”

Denson Hollis, executive director of development – principal gifts, said he had the pleasure of getting to know Millie Craig at her home in Texas.

“We talked about our mutual upbringing in the Mississippi Delta among other things,” Hollis said. “But my friendship with both her and David was really cemented when they joined me in the chancellor’s box at Vaught-Hemingway Stadium to watch the Rebels play Texas A&M. This was Millie’s first time back on campus since 1962.”

The Craig brothers and their families are passionate Aggie fans and are both Texas A&M graduates.

“This was one of the most unique gifts I have ever secured because of their loyalty to A&M. However, they knew Ole Miss was the perfect home for this meaningful scholarship endowment because of their parents’ love of the institution. Additionally, it shows the level of respect and appreciation the brothers have for their parents and stands as a lasting tribute to them.”

The Duff Center for Science and Technology Innovation will be located in the Science District, with one side facing the Grove and another facing Vaught-Hemingway Stadium and The Pavilion at Ole Miss. The building will house lecture halls as well as chemistry, biology, physics, engineering and computer science labs.

Among other building highlights, students will enjoy lower student-instructor ratios and technology-enabled active learning labs as well as a visualization lab, similar to a small IMAX theater for 3D visualization.

O.V. Craig earned a bachelor’s degree in chemistry in 1957. After a stint in the U.S. Air Force at Edwards Air Force Base, he returned to Ole Miss to complete additional courses in math.

“Mom and Dad met that summer in the cafeteria while eating breakfast. Dad must have borrowed some lecture notes from my mom who was taking the class in ‘Real Variables,’” David said. “They continued to see one another from that point and were married about a year later.”

Millie Craig earned bachelor’s and master’s degrees in mathematics from the university in 1961 and 1962 respectively.

O.V. Craig began his career as a systems analyst for Gulf Oil Corp. in Port Arthur, Texas, while his wife taught school for a year before choosing to stay home when the couple’s sons were born.

When her husband was transferred to Houston in 1973, Millie Craig began a distinguished career of volunteerism and community service, becoming one of the state’s first volunteer female firefighters. During her tenure with the Kingwood Volunteer Fire Department and Kingwood Area Emergency Services, she served as fire chief. The Jefferson Award later recognized her volunteer service, and she also received the Communicator of the Year Award years later.

“She is smart, adventuresome, fun and loyal,” said Beckmann, adding that it was “a real treat” to reconnect with Millie on campus during the Texas A&M football weekend in 2019.

During that visit, the two reminisced about their days in the residence hall, “doing a few little pranks, such as trying to make a rocket out of a cigarette and matches,” she said. “It didn’t work!”

What is successful, though, is Craig’s endowment.

“It is a fantastic way to pay back for what we received at Ole Miss and allow others to receive the benefits of an Ole Miss education,” said Beckmann, senior associate with ExxonMobil and a 1961 UM chemical engineering graduate. “I am reminded frequently how much more we received than those educated at other schools!”

For more information on supporting the College of Liberal Arts or the STEM facility, visit give.olemiss.edu or contact Denson Hollis, executive director of development – principal gifts, at dhollis@olemiss.edu or 662-915-5092.

For information on including Ole Miss in estate plans, contact Daniel K. Wiseman, CFRE, senior director of gift planning, at 662-915-7601 or daniel@olemiss.edu.