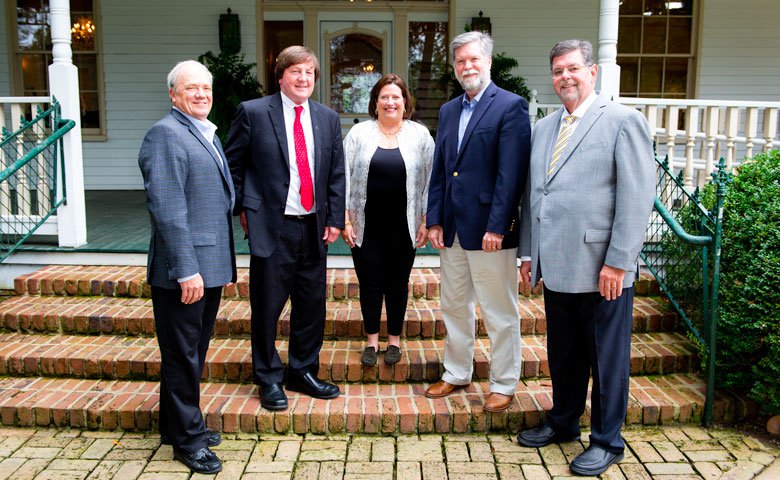 Helen Overstreet of Oxford, Mississippi, center, has made a major gift to strengthen eight areas of the University of Mississippi important to her and her late husband, Mike Overstreet. Visiting with her are, from left, Wendell Weakley, president/CEO of the UM Foundation; Mark Wilder, dean of the Patterson School of Accountancy; Ken Cyree, dean of the School of Business Administration; and Morris Stocks, the Don Jones Chair of Accountancy.

Helen Graeber Overstreet knew how her late husband, Mike Overstreet, felt about the University of Mississippi. When she was ready to expand his legacy, she turned to their alma mater to establish six endowments that will impact the university for generations to come.

“I knew where his heart was, and I knew where mine was, too,” said Helen Overstreet of Oxford, Mississippi. “And I love to think that I’m continuing our story.”

“Ole Miss made such an impact on our lives. We would not have enjoyed the successes we did without the degrees we received in business and accountancy,” said Helen Overstreet, who also pursued three years of study at Southern Methodist University.

“I had the best of the best when it came to professors. When I returned here to pursue a second undergraduate degree and graduate study, I was a single mother, and the faculty was very protective of me and understood the challenges I faced. The Bursar’s Office staff even helped me find a place to live.”

Morris Stocks, professor and Don Jones Chair of Accountancy, knows the Overstreet family members and applauds the impact they continue to make on the university. Mike Overstreet, a 1970 accountancy graduate, began committing private support to the university in 1988 and continued until his death earlier this year.

“In the Patterson School, we are moved by the generous gift from Helen Overstreet in memory of her husband, Mike.

“I was privileged to teach Helen in two of her accounting courses when she returned to the university to earn an additional degree. That classroom opportunity led to a 25-year friendship with Helen and Mike. I have a strong sense of professional and personal affection for the Overstreet family and appreciate the manner in which they have contributed to the overall mission of our university,” said Stocks.

Ken Cyree, dean of the School of Business Administration, expressed his appreciation for the faculty support.

“Helen experienced Ole Miss faculty members who are not only top-tier teachers but also academic leaders who care about their students’ welfare. Professors were transformational in her life, and she is now helping to ensure that future Ole Miss students will continue to thrive with exceptional faculty members. We are grateful for this faculty-support endowment bearing Mike Overstreet’s name.

“I always enjoyed talking to Mike, whether it was about the Business School, golf or any topic. His passion was always evident,” Cyree said.

Two other endowments that Helen Overstreet created speak to the late businessman and health care administrator’s love of music: the Mike Overstreet Memorial Band Scholarship and Jazz Scholarship endowments. Thanks to a band scholarship, Overstreet was able to attend Ole Miss and played the trumpet in the Pride of the South marching band and in the Jazz Ensemble throughout his undergraduate years.

Another endowment, the Edgar Harold Overstreet Family Endowment for University Police Department Training, recognizes the contributions of Mike Overstreet’s father, who was an officer with UPD for 17 years.

“To my knowledge UPD has never received an endowment,” said UPD Chief Ray Hawkins. “Oftentimes, the work officers do for the community goes overlooked. The countless hours they spend away from their loved ones to be present and vigilant providing support and safety services for the community is a tremendous sacrifice. To have someone who knows personally of the commitment made by law enforcement officers acknowledge that sacrifice with such a generous offering is heartwarming and greatly appreciated.”

The chief said the Overstreet gift will go a long way in helping accomplish a UPD training goal.

“We want to send more officers to advanced training such as the FBI National Academy, Southern Police Institute and Northwestern Center for Public Safety. These are stringent academic settings specifically for law enforcement and public safety professionals. I would like to thank Mr. Overstreet for his sacrifice of 17 years of service at UPD and to his daughter-in-law, Helen Overstreet, for such an auspicious gift,” said Hawkins.

The designation for another endowment was encouraged by a friend at the Memphis Brooks Museum of Art who knows Helen Overstreet and her appreciation for the arts. The Helen and Mike Overstreet Exhibition Endowment will support new exhibits at the University Museum and Historic Houses.

Part of the gift also supports the Children’s of Mississippi campaign to fund dramatic enhancements to the state’s only hospital for children at the University of Mississippi Medical Center, and other major funds are directed to the Vaught Society in support of Ole Miss Athletics.

Keith Carter, the deputy athletics director for development and resource acquisition and executive director of the Ole Miss Athletics Foundation, said the gift to the Vaught Society will help strengthen athletics programs and fund facilities and equipment.

“Helen and Mike Overstreet steadily increased their involvement with Ole Miss Athletics over the years, and we are deeply grateful for this latest gift. Helen understands the importance of having state-of-the-art facilities to be able to compete on a national level. We appreciate her financial support and faithful attendance at our many events.”

The gift designations reflect areas that were most important to Mike Overstreet and speak to his well-rounded life.

“Mike was full on all the time,” Helen Overstreet said, laughing at some of the memories from her 22-year marriage. “He was high energy and embraced a strong work ethic. He was a visionary in his professional career and was very adventurous in his personal life. He had more fun than anyone.

“Mike said to me, ‘We’re going to see all seven continents,’ and we did. He swam in hot lava pools, traveled with scientists on a freighter to South America, celebrated a New Year’s in Buenos Aires, scaled six peaks in Antarctica, skied cross country and more.

“But most of all, he cared about taking care of people, just like his daddy did,” Overstreet said in describing her husband whom she first met at Christ Presbyterian Church in Oxford. “His faith and his family were very important to him.”

Born in Oxford, Mississippi, to Edgar Harold and Katie Mae Wallace Overstreet, Mike Overstreet followed in his parents’ footsteps in the real estate and long-term care facility industries and served in various leadership roles in the Mississippi Nursing Home Association. In fact, he served on every board available in the eight areas of nursing home administration in order to learn as much as he could about the industry.

Earlier, Overstreet served as an accountant for Goodyear and American Greeting Cards, and farmed cotton, soybeans and rice in Mississippi County, Arkansas, before moving back to Oxford in 1994.

In addition to his wife, Overstreet was survived by daughters Marion McAbee and her husband, Jeff, of Broomfield, Colorado; Ruth Buss and her husband, Josh, of Neenah, Wisconsin, and Rebecca Cornelius of Oxford; and son Robert Thomas “Rob” Cornelius of Portland, Oregon. Another daughter, Katherine Overstreet Logan, preceded him in death. Helen Overstreet has established an endowment in Logan’s name at Arkansas State University, where she was a math professor.

To contribute to any of the six endowments bearing Mike Overstreet’s name, send a contribution with the endowment’s name written in the check’s memo line, to the University of Mississippi Foundation, 406 University Ave., Oxford, MS 38655. Gifts can also be made online at http://give.olemiss.edu. For more information, contact Jason McCormick, development officer, at jason@olemiss.edu or 662-915-1757.