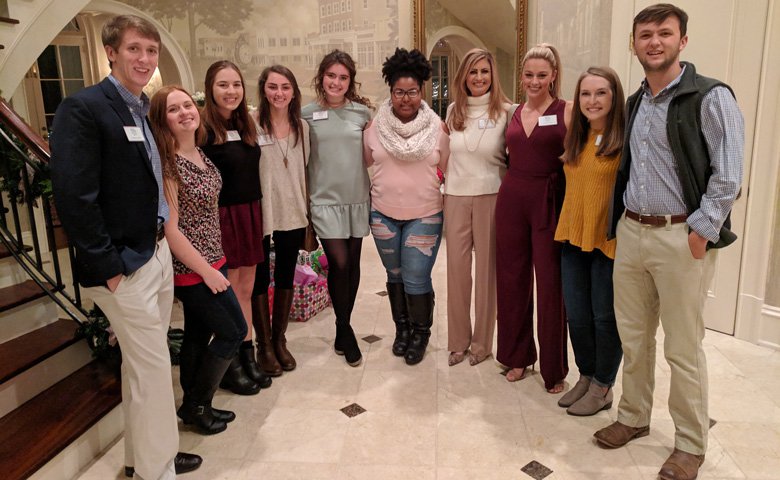 Mary Susan Clinton (fourth from right) visits with OMWC scholars at the council’s 2018 Christmas party at the home of Sam and Mary Haskell. Scholars are (from left) Colton Terrell, Samantha Simpson, Francena Sekul, Meagan Harkins, Alexis Rose, Alexandria Seals, Amelia DeWitt, Mikayla Johnson and John Marquez. The OMWC currently has 29 scholars who hail from hometowns across the nation. To date, the council has mentored 133 students awarded scholarships through the program.

Friends of the Naples, Florida, resident surprised her with a scholarship endowment they established in her name. The donors asked to remain anonymous.

“While the revered scholarship may bear my name, this generous family has afforded tremendous opportunities and created a legacy that will live on through our scholars’ lives,” said Clinton, who majored in journalism at the University of Mississippi.

“These friends are dedicated philanthropists who unselfishly committed this gift to support the educational endeavors of OMWC scholars. It is heartwarming when we receive a gift from such selfless charitable donors, and this endowment humbles me.”

With a gift of $125,000, the donors established the Mary Susan Gallien-Clinton Council Scholarship Endowment, which will provide financial assistance to UM freshmen chosen on their academic abilities and leadership potential. Students who maintain a 3.0 GPA may receive the scholarship for a maximum of eight semesters.

“These scholarships will fuel the passion within these scholars to continually strive for success in their areas of strength, while at the same time exposing them to new experiences and opportunities both inside and outside of the classroom,” Clinton said. “The Ole Miss Women’s Council has designed innovative programming to give these scholars the very best preparation and advantages to help ensure success in their future careers and lives.”

In addition to their academic pursuits, scholarship recipients are afforded the opportunity to participate in a leadership development program and mentoring program. The program includes internship support, leadership workshops, networking and travel, both nationally and abroad.

“This scholarship endowment honors a woman who has worked tirelessly on behalf of Ole Miss students through her support of our beloved university and dedicated service on the Women’s Council,” said Mary Donnelly Haskell, immediate past chair of the council. “This recognition of Mary Susan is so well deserved.”

Helmed by an accomplished cadre of female leaders and philanthropists, the OMWC adapts its programming to accommodate its scholars’ core interests, while continually challenging them to broaden their horizons.

“From first day of scholars’ experiences at Ole Miss, Women’s Council members participate in shaping these exceptional students with mentoring and programming that takes them through graduation and beyond. ,” Clinton said. “Our program fosters determination to establish a meaningful foundation to build upon for a lifetime.”

In addition to scholarship support, the OMWC established the Global Leadership Circle (GLC) to seek private support for scholarship recipients who want to study abroad or intern with national or international organizations.

Thanks to GLC support, OMWC scholar Parker Maloney of Clinton, Mississippi, interned this past summer with the fundraising office/strategic partnership division of St. Jude Children’s Research Hospital in Memphis, Tennessee.

“I’m so grateful for the Ole Miss Women’s Council Scholarship program for funding not only my education but also my internship. Few college students are fortunate enough to be rewarded that opportunity. I am certain it will make all the difference when I graduate,” said Maloney, a marketing and corporate relations major.

Clinton, a Savannah, Tennessee, native began her career after Ole Miss as a stockbroker with Morgan Keegan in Memphis, Tennessee, before founding Gallien Global Vision — an international wildlife documentary company in 1992. Trekking the African countries, her award-winning co-productions with Londolozi Game Reserve, Turner Broadcasting, Buena Vista/Disney and The Discovery Channel, have aired in over 100 countries and received many awards, including an Academy of Cable Entertainment Award for Best International Documentary Special.

Clinton also founded the medical skin care line, Renaitre, that sold its products in physicians’ offices internationally and on the QVC Shopping Network.

Clinton’s civic participation includes service on the INSOUTH Bank board of directors; the National Domestic Violence Hotline (as former vice-chair, current board of directors and past executive board); OMWC Legacy Award Chair 2016; Gulfshore Life Magazine’s community advisory board; the Community School of Naples Angel Ball as past chair; the Boys and Girls Club of Collier County as a former board member; and the Greater Naples Area Delta Gamma Alumnae Chapter as former vice-president of membership.

She and her husband, J.D., have two sons, John Denver Clinton II, who earned a bachelor’s and master’s degree from the UM Patterson School of Accountancy in 2017 and 2018 respectively, and Russell Hurst Clinton, a junior economics major at Vanderbilt University.

Read more about the Women’s Council at www.omwc.olemiss.edu. For information on how to make a gift to support OMWC programming or a scholarship, contact Suzanne Helveston, development associate, at shelveston@olemiss.edu or 662-915-2956.