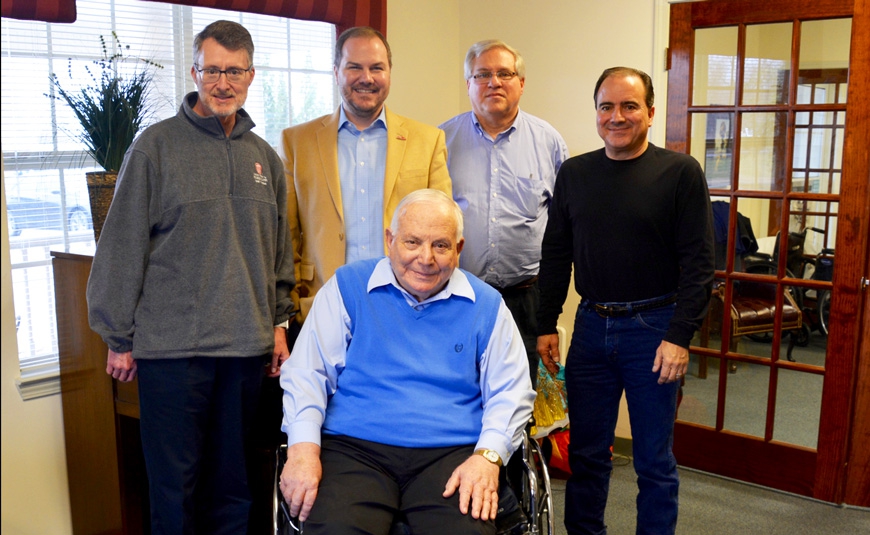 These pharmaceutical artifacts line the shelves at the entrance to the dean’s office in the University of Mississippi School of Pharmacy. They were a gift from UM alumnus Anthony S. Vazzana of Leland, Mississippi, and are now on permanent display as treasures of an era past.

Meanwhile, an additional gift points to the future: Vazzana has recently designated to the university two Charitable Remainder Annuity Trusts. Given by Vazzana as a memorial in honor of his parents, Sam and Mary G. Vazzana, the gifts will provide scholarships for pharmacy students and support the Manning Family Fund for a Healthier Mississippi at the University of Mississippi Medical Center — a fund that underwrites disease treatment and prevention in the areas of childhood obesity, caregiver training, African American men’s health and Alzheimer’s and other dementias.

Vazzana was unavailable for comment, but his cousin Gayton C. Cascio of Greenville, Mississippi, said, “He wants to help prepare students for the field of pharmacy. That was always the love of his life — pharmacy and the study of pharmaceutical chemistry. He really wants to see future generations benefit from his generosity.”

Vazzana received a bachelor’s degree in pharmaceutical chemistry from Ole Miss in 1956 and soon after had an opportunity to buy into Turner’s Pharmacy, the largest drugstore by volume in Greenville, where he worked until his retirement in 1982. He also served as a pharmacist in the U.S. Air Force Reserve at the Greenville Air Force Base and was briefly stationed in Colorado.

“The thing that struck me was that Anthony loved talking about his time at the pharmacy and about the people with whom he interacted as a pharmacist. You could see a smile on his face when he talked about it,” said UM School of Pharmacy Dean David Allen, who met with Vazzana in January at the Washington Care Center in Greenville.

“He’ll talk about things at Ole Miss as if they were the other day,” Cascio said. “As a youth, he enjoyed sports, especially football. He made All-Conference as a tackle in the old Delta Valley Conference his senior year at Leland High School, so he talked to the Ole Miss coaches about possibly playing for the Rebels. He decided not to because he knew he would have afternoons filled with labs because of chemistry and that sort of thing. But he always enjoyed watching it. He’s a loyal fan.”

Vazzana has led a quiet, unassuming life. For many years, he enjoyed annual trips to Cuba before the embargo and then to Mexico; he tinkered with cars and went twice to the Indianapolis 500 with friends; and he was a collector of many things.

“He had a pharmacy scale and he kept all his old textbooks. He kept a lot of old memorabilia there in the house. Even the library in Greenville put pieces of his collection on display in the past. He was proud of that,” Cascio said, adding that his cousin also enjoyed gardening. “He spent a lot of time growing vegetables and spices.”

Now, thanks to his generous planned gift, he will grow young minds for the profession he loves.

“Just from the way he talks and the way he lived his life, I know that’s why he wanted to give back to Ole Miss,” Cascio said.

“By endowing this scholarship, Mr. Vazzana will help give students the opportunity to make their dreams of a career in pharmacy come true,” said Chancellor Jeffrey Vitter. “In turn, the students he helps will then go on to help save lives in the healthcare profession.

“Likewise, his support of the Manning Family Fund will significantly bolster continued research in the areas of disease treatment and prevention within our state. We are extremely grateful for Mr. Vazzana’s generosity.”

The Anthony Vazzana Endowment is open to gifts from individuals and organizations. To contribute, send checks with the endowment name noted in the memo line to the University of Mississippi Foundation, 406 University Ave., University, MS 38655; or visit www.umfoundation.com/makeagift.

For information on supporting the School of Pharmacy, contact Port Kaigler, development director, at 662-915-2712 or port@olemiss.edu.