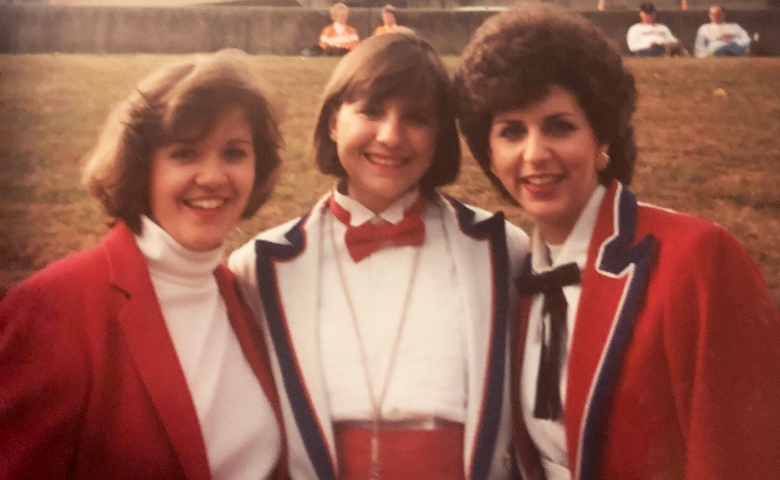 As former drum major for the University of Mississippi Band, Layne McGuire is used to having people follow her lead. In supporting the band with a recent gift, she hopes to inspire others to do the same.

“I was approached about making a gift to the university beyond my usual giving. When I found out the option of a scholarship was doable, I wanted to pursue it,” McGuire said. “I know from working with David Willson (director of University Bands) that scholarship money is always a challenge. This was a way to give back to something that has given me so much.”

Named in honor of her parents, the Vincent G. and Maxine McGuire Band Scholarship will be available to full-time entering freshmen band members, with first preference given to students from Oxford, Mississippi.

“The college band experience is totally different from high school, and I have many friends who tell me they would have kept playing had they continued after high school. I think part of the reason that I still play is that I never stopped. So I hope the scholarship helps recruit a student who might otherwise decide to put their horn away,” McGuire said.

Willson said the Pride of the South could not exist without private support like McGuire’s.

“We live in a state that has a small band population compared to most SEC schools and we have eight universities, 15 community colleges, four private schools and out-of-state schools competing for musicians, and trust me, they know the market,” Willson said. “Without being competitive in the marketplace we cannot compete with even modest quality.”

“The mid- to upper-level players are essential to having the large marching band and excellent basketball pep bands,” Willson continued. “The Ole Miss Band operates with one of the lowest budgets in the conference and private donations help us maintain a margin of excellence.”

McGuire graduated from Oxford High School before continuing her education at Ole Miss. An accomplished student, McGuire’s membership in the UM band segued into a scholarship and, by the time she graduated, she was the drum major.

“I have been in band since the sixth grade and it was such a huge part of my college experience,” McGuire said. “I loved band and my band directors were some of my biggest influences.”

In college, McGuire also was a member of Alpha Lambda Delta, Zeta Tau Alpha sorority and the Air Force ROTC.

“Layne was one of the first students I met on campus and I hold her in the highest regards,” Willson said. “Layne had a clear understanding on the state of the band and helped guide me through the first three years. Her love for this band is enough to motivate anyone around her to do the same.”

She has since worked as a consultant for the accounting firms of PwC, BDO, Ernst & Young and Dixon Hughes Goodman, and now leads the community banking internal audit and regulatory compliance practice in the Carolinas for RSM.

The Ole Miss Band has had a tradition of excellence since 1928. In 2014, the Pride of the South Marching Band reached its largest enrollment in school history at 315 members.

“The gift Layne McGuire established will directly support students in the Pride of the South Band and we are extremely grateful for her generosity,” said Denson Hollis, executive director of development. “The band is an integral part of the university’s fan experience and elevates the level of enthusiasm and school pride wherever it performs. Gifts to the band directly affect its ability to grow and thrive.”

The Vincent G. and Maxine McGuire Band Scholarship is open to gifts from individuals and organizations. To contribute, send checks with the endowment name noted in the memo line to the University of Mississippi Foundation, 406 University Ave., University, MS 38655; or visit www.umfoundation.com/makeagift.

For more information on ways to support the Pride of the South, contact Ron Wilson at 662-915-1755 or jrwilso3@olemiss.edu.