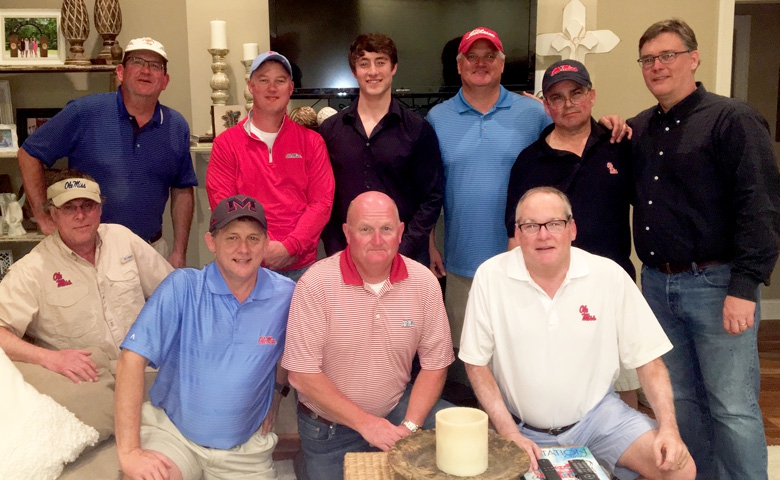 Richard Edmonson lost his life to ALS in 2015, but his memory is forever linked to the University of Mississippi. Nathaniel Snyder of Myrtle Beach, South Carolina, is the first recipient of a UM scholarship established to pay tribute to Edmonson.

Snyder, who graduated from Ole Miss with a bachelor’s degree in accountancy in 2017, is now a first-year Ole Miss law student using the Richard “Richie” M. Edmonson, Jr., Memorial Scholarship to supplement his tuition.

“I am extremely honored and humbled to be the first recipient of this scholarship and to know that I will be the first to carry on Mr. Edmonson’s legacy,” Snyder said. “His generosity has allowed me to pursue a career in law, a profession that Mr. Edmonson used to help others.”

Edmonson of Madison, Mississippi, was a partner at Markow Walker law firm for 24 years and was an A-rated attorney by Martindale Hubbell.

“Richie was always very goal-oriented. He would see something he wanted to accomplish and he would never give up until he had achieved his goals. He had a great drive and determination to succeed at everything he attempted,” said Lisa Bane, Edmonson’s wife. “I think he would be very honored to know that this scholarship is helping other people reach their own academic goals at the university he loved so much.”

Edmonson chose UM for his college home, earning both undergraduate and law degrees. He excelled in academics, particularly in his pursuit of his legal education, and was active in the Kappa Sigma Fraternity, Order of Omega, Mortar Board, Phi Delta Phi and the Mississippi Law Journal staff. In addition, the well-rounded student was active in intramural sports, with flag football as his favored activity.

After college, he enjoyed spending time with Lisa and their three daughters as well as mountain and road biking, running, hunting and whitewater rafting.

Fraternity brothers and family members sponsor a golf tournament in Oxford each year to raise money for ALS research.

Additionally, the Edmonson Scholarship Fund is open to gifts from individuals and organizations. To contribute, send checks with the fund’s name noted in the memo line to the University of Mississippi Foundation, 406 University Ave., University, MS 38655; or visit www.umfoundation.com/makeagift. For more information, contact Suzette Matthews, development officer for the School of Law, at suzette@olemiss.edu or 662-915-1122.