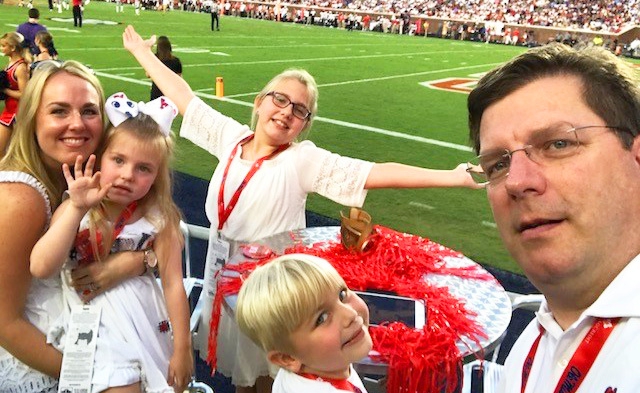 Avery and Neil Forbes enjoy a Rebel football game in Vaught-Hemingway Stadium with their children (from left) Madeline,
Hannah and Sawyer.

Avery and Neil Forbes of Madison, Mississippi, attended colleges other than the University of Mississippi, but the couple caught Rebel fever nonetheless.

“When I came to Mississippi in 2003 to run a political campaign, I happened to work for a candidate who was a UM grad and his love for Ole Miss was contagious,” said Neil Forbes, a Chesapeake, Virginia, native who’s now a partner specializing in government services with the accounting firm Horne LLC of Jackson, Mississippi.

“Additionally, my roommate was a former team mascot and, considering it was Eli Manning’s last year as quarterback, there was a lot of excitement about the football team,” Forbes continued. “It was a great year to get engaged and excited about Ole Miss football. It didn’t take long for me to get hooked.”

The Forbes family has steadily increased its involvement with Ole Miss Athletics since 2005 and most recently made a major gift to the Forward Together Campaign, which supports facility improvements and scholarships for student-athletes.

“We just want our gift to help the athletics department continue to provide world-class facilities for our athletes and the fans,” Neil Forbes said, adding that the infectious Ole Miss spirit is quickly spreading to his children.

Hannah, 11, Sawyer, 7, and Madeline, 5, flashed wide grins on the “smile cam” during a baseball game and enjoyed a sideline pass for football. Sawyer even wanted to celebrate his birthday at the Pavilion at Ole Miss, the university’s basketball arena.

“We were also thrilled to have the opportunity to lead the team through the Walk of Champions prior to a game last season,” Neil Forbes said. “Coach (Matt) Luke and (Rebel wide receiver) AJ Brown both stopped for a picture with our family, and that is a memory none of us will ever forget!”

The Forbes family looks forward to creating many more such memories.

“Supporting Ole Miss Athletics has become a natural part of what we do as a family on weekends,” said Avery Forbes, who was admitted to Ole Miss out of high school but decided to study communications at Mississippi College in her hometown of Clinton, Mississippi. Even then, she frequently visited friends at Ole Miss. “Our goal is that when our kids are older and out of the house, they will always look back and think of all the fun we had and the memories we created over the years going to games.”

Neil Forbes joined the U.S. Army after high school. After serving in South Korea and at Fort Bragg with the 82nd Airborne, he attended community college first and then Virginia Wesleyan College, where he earned a degree in English literature.

“Some of our most loyal fans are not UM graduates and we think that’s simply a testament to our excellent game-day experience,” he said. “On behalf of all those who love our program, we greatly appreciate Neil and Avery’s generous support of Ole Miss Athletics.”

The Vaught Society is the leadership fundraising arm of the Ole Miss Athletics Foundation. Members of the Vaught Society make a commitment of $25,000 or more that is fulfilled over five years ($5,000 per year). These major gift commitments are above and beyond any priority seating annual donations. In recognition of their generosity, Vaught Society members gain access to an exclusive stewardship program.

To support Ole Miss Athletics with a gift to the Forward Together campaign, contact Keith Carter at jkcarter@olemiss.edu, call 662-915-7159 or visit http://givetoathletics.com/forward-together/.