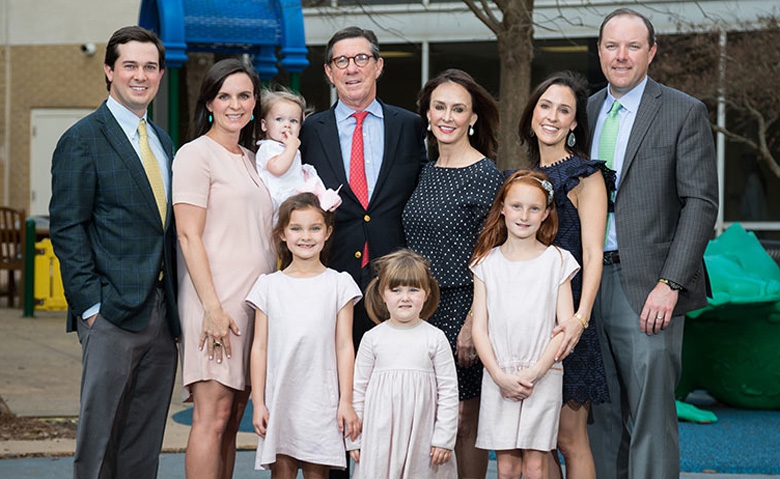 The simple prayer of a child for the patients of Batson Children’s Hospital brought about a $1.5 million gift from the Van Devender Family Foundation to expand pediatric care at the University of Mississippi Medical Center.

Laura Van Devender Stansell prays each day with her daughters, including Clara Cate, or Cece, 7.

“She loves the story of the rainbow in the Bible. When we would pass by the children’s hospital on the way to school, we’d talk about the hospital, and she wanted to pray for the children who are patients there, so we have ever since,” Stansell said.

“It really touched my heart,” he said, “and I started thinking about how we could help.”

When the Van Devender family talked about causes their family foundation will fund, the Campaign for Children’s of Mississippi, the philanthropic drive to help fund construction of the $180 million children’s tower adjacent to Batson Children’s Hospital, was at the top, he said.

“Children and family are important to us,” he said. “They are our future.”

Van Devender and his wife, Mollie, have four children, Laura Stansell, William, Anne Stanton and Clinton, and six grandchildren with two on the way.

“Cece’s prayer, ‘Please help all the children,’ was not only evidence of her caring heart, it was an expression of what we value as a family,” Stansell said. “We want to help the children, and what better way to give than as a family.”

The tower’s opening is planned for August 2020. Children’s of Mississippi leaders anticipate recruiting 30-40 new physicians in the next five years as the facility is built and after it is opened, since it will provide additional capacity. At a minimum, about 50-75 staff positions, not including physicians, would be added after construction.

Van Devender’s close friend and former football teammate, Archie Manning, is a strong supporter of UMMC’s mission, having launched the Manning Family Fund for a Healthier Mississippi in 2014.

“Billy and I have been teammates before, so I am happy we are on the same team again, this time with the goal of creating a healthier Mississippi,” Manning said.

Joe Sanderson, co-chair of the campaign with his wife, Kathy, is also a friend of the Van Devenders and encouraged the family to participate.

“The children’s tower project will change how Mississippi cares for the health of its children, especially those facing critical illness or injury,” said Taylor, a Natchez native and mother of three. “It will mean that we can offer our children the very best, and isn’t that what we as parents want and what we know they deserve?”

Dr. LouAnn Woodward, vice chancellor for health affairs and dean of the School of Medicine, said the gift represents the best of the state.

“Mississippians are giving people,” she said, “and the generosity of the Van Devender family demonstrates how the desire to help others can also serve as an investment in our state’s future.”