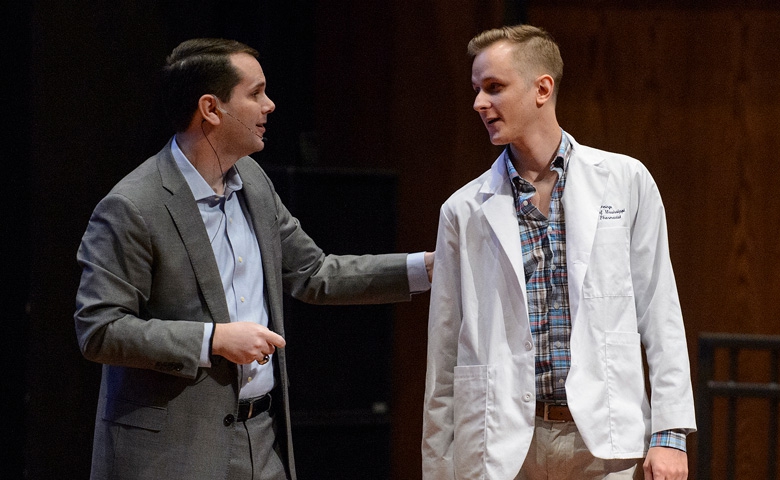 UM alumnus Blake Thompson (left) surprises student pharmacist Lee Jennings by covering a semester of his tuition during the School of Pharmacy’s annual Hartman Lecture. Jennings was the only student to take Thompson’s challenge
to deliver a brief speech on his career goals.

Blake Thompson, the 2018 Hartman lecturer for the University of Mississippi School of Pharmacy, surprised a crowd of student pharmacists, faculty, friends and family at the March 9 lecture by offering to cover a semester’s worth of tuition for one student.

Thompson, a UM alumnus who is vice president for government affairs at Ohio State University, delivered a lecture focused on the importance of taking career risks. To demonstrate, he asked any student to come onstage and speak to the nearly-full Gertrude C. Ford Center for the Performing Arts about his or her own career goals.

“If you would consider the idea of coming up here with me right now and giving an impromptu speech risky, then I want you to get ready,” he said, before inviting someone to step out from the audience and join him on stage.

However, when Lee Jennings, a second-year student from Hattiesburg, volunteered and made his way to the stage, instead of asking Jennings about his career plans, Thompson remarked on the risk Jennings had taken.

“Lee, because you took a risk and volunteered, you now have your spring semester’s tuition covered,” Thompson said, to the audience’s applause. “It’s taken care of. Congratulations!”

Before he finished, Thompson gave Jennings one condition: that he do the same for another student pharmacist someday.

Thompson illustrated the importance of this condition by quoting former Ohio State football coach Woody Hayes, saying “You can never pay it back, but you can pay it forward.”

Jennings said he was initially “stunned,” but after registering Thompson’s words, felt extremely grateful, noting that the scholarship will significantly defray his student loan burden.

He also expressed gratitude to Thompson for the lesson he imparted.

“I want to own a pharmacy one day, and I know that buying or building a pharmacy is a major risk,” Jennings said. “This experience taught me that reward doesn’t come without a risk.

“As I move forward in my career and in my life, I hope to keep the idea of taking a risk in mind when faced with tough decisions.”

Jennings hopes to fulfill his promise to Thompson and pay his good fortune forward not only for another student pharmacist in the future, but also in the community where he will someday practice his profession.

“This is an incredible gesture and illustration for our student pharmacists,” said David D. Allen, dean of the School of Pharmacy. “Taking innovative risks is how we as pharmacists can improve health care.

“By ‘paying it forward,’ Blake demonstrated the giving spirit that pharmacists should bring to their work, whether they are giving their resources, their time or their expertise.”

Thompson credited his time at Ole Miss for teaching him the importance of risk-taking that he sought to convey with the lecture.

“Those times when I have done something that was uncomfortable or that I wasn’t quite sure I was ready to do, that is when I have seen my greatest growth,” Thompson said.

For more information on pharmacy education at Ole Miss, go to http://pharmacy.olemiss.edu/. To make a gift to the School of Pharmacy, click here or contact Port Kaigler at 662-915-2712 or port@olemiss.edu.