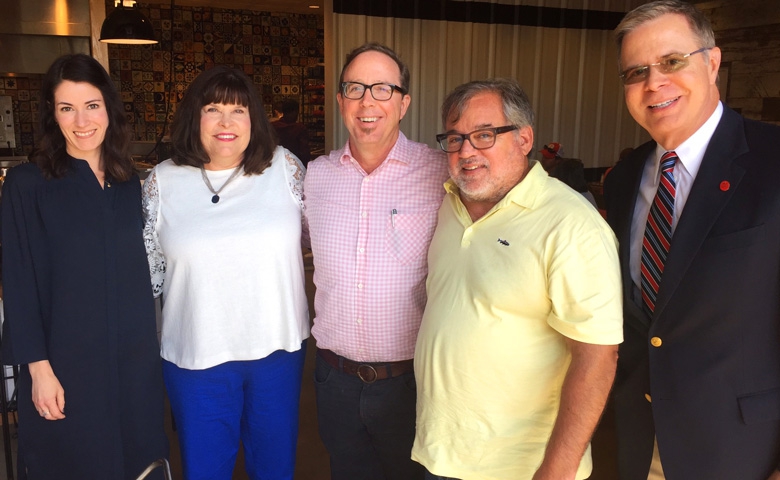 The University of Mississippi has matched a recent $1 million pledge from restaurateur Nick Pihakis to the Southern Foodways Alliance (SFA) as a way to demonstrate their mutual appreciation of SFA work and specifically the leadership of longtime director John T. Edge.

Pihakis, cofounder of Jim ‘n Nick’s Bar-B-Q and principal in the Pihakis Investment Group, has been a staunch and generous supporter of the SFA for the past 13 years, believing — like the SFA — that community is built as people cook and share meals together. The SFA has mentored and educated countless students, staged dozens of symposia, published award-winning podcast episodes and journal issues, collected more than 900 oral histories, and produced more than 100 documentary films.

“I wanted the University of Mississippi to recognize John T’s significant work throughout his tenure at the SFA, but I also hope my gift will provide income for the recruitment and retention of outstanding leadership going forward and ensure that quality teaching, research and service will be available for future generations of Southern Studies students,” Pihakis said.

The Birmingham, Alabama, native said his gift honors Edge’s upcoming 20-year anniversary as director. It also establishes the John T. Edge Director of the Southern Foodways Alliance Endowment, which, when vested, will stand at $2.5 million. The equivalent of $2 million is already in hand; $500,000 remains to be raised.

“We happily accept this funding opportunity and greatly appreciate Nick’s generous gift, his commitment to the SFA and his continued support,” Chancellor Jeffrey Vitter said. “John T and the SFA have worked tirelessly through the years, building a program through the study of food that has made a deeply transformative impact within the UM academic community and within the lives of our students, alumni and friends.”

The SFA operates on a $1.4 million annual budget that will likely reach $1.8 million in three years, and the major part of the budget is contributed by private donors like Pihakis, a two-time James Beard Award semi-finalist and an entrepreneur who has helped grow the careers of chefs and restaurateurs from Birmingham to New Orleans to Charleston, South Carolina, and throughout the South.

To date, the SFA has endowed two positions that contribute directly to UM students. The SFA raised the majority of endowment funds for the academic position held by Catarina Passidomo, assistant professor of Southern Studies and Anthropology. Additionally, the SFA raised all the outside funds ($1 million from Pihakis) for the filmmaker and documentary instructor position now held by Ava Lowrey.

Edge earned bachelor’s and master’s degrees in Southern Studies from the University of Mississippi in 1996 and 2002 respectively. During his tenure as SFA director, Edge has also served as a contributing editor at Garden & Gun and a columnist for the Oxford American. For three years he wrote the monthly “United Tastes” column for the New York Times. In 2017, Penguin published his latest book, “The Potlikker Papers: A Food History of the Modern South.”

Edge said he is deeply honored by his friend’s gift and believes it will help support the future of the organization. “Until now, the SFA has not raised money to endow a position that directly funds our work and positively impacts our budgets. That was purposeful. We believed it was important that we contribute, first, to the study of food culture on the University of Mississippi campus,” said Edge, who had made a career documenting, studying, and exploring the diverse food cultures of the American South. “Now that the SFA has made those investments in the academic community, and in University of Mississippi students, we turn our attention to SFA leadership.”

“The impact of this generous gift is significant and important,” notes Dean Lee Cohen. “Endowed positions such as this one are critical as we advance as an R1 institution. Specifically, these positions help us attract the strongest possible people to our university and directly contribute to or support the scholarship and teaching of our faculty.”

The John T. Edge Director of the Southern Foodways Alliance Endowment is open to gifts from individuals and organizations who want to contribute to the remaining goal of $500,000. Checks supporting the SFA may be mailed with the endowment noted to the University of Mississippi Foundation, 406 University Avenue, Oxford, MS 38655. Gifts can also be made online by visiting www.umfoundation.com/makeagift or by contacting Nikki Neely, development officer for the SFA, at 662-915-6678 or nlneely@olemiss.edu.