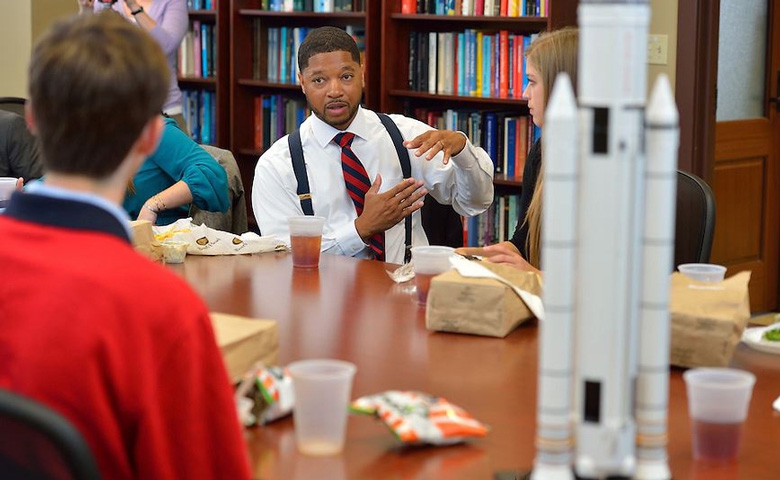 Markeeva Morgan discusses advancements being made toward deep-space travel during a 2014 campus visit.

Every morning Markeeva Morgan and his wife, Shaquinta, send their two daughters off to school by emphasizing a message: “Be learners, be leaders and be lights.”

“We feel these attributes form a foundation of humble greatness infused with a central compulsion to give forward,” said Morgan, who is the inaugural recipient of the Emerging Philanthropist Award of the Ole Miss Women’s Council for Philanthropy (OMWC). He will be honored April 13 at the University of Mississippi (UM).

The Emerging Philanthropist Award was founded to illustrate to OMWC scholars and others examples of philanthropic efforts accomplished by a person early in his or her life or career, said Liz Randall of Oxford, Mississippi, the OMWC member who proposed the award’s creation. It complements the OMWC’s Legacy Award, which honors individuals with lifetime resumes of philanthropy and accomplishments.

“Givers in the Ole Miss family are plentiful; many of them inspire me,” said Morgan. “That I would be selected from among them for this honor is quite surprising. I am humbled and honored that my family's attempt to respond to the yearning in our hearts and the calling on our lives to help others would be recognized with such an accolade.”

Morgan said he is not yet able to write “big checks” so he gives in other ways, such as devoting time to students.

“I consider encouraging the next generation of thought leaders and innovators to be part of my job as a member of the working citizenry in this country,” he said. “In essence, I don't consider my giving to be something I have to find time to do. It is something that is a part of everything I do.”

The award recognizes Morgan’s significant service to students and organizations, coupled with his demanding, high-pressured career and his dedication to his family, said Mary Haskell of Oxford, the OMWC chair. In addition to working with Ole Miss students, Morgan, who earned a master’s degree in engineering management from Catholic University of America and who is pursuing a doctorate in systems engineering at The George Washington University, teaches at the University of Alabama-Huntsville.

“The Emerging Philanthropist Award gives us the opportunity to spotlight someone who, by their philanthropic spirit, is modeling what it means to give back to our community, alma mater and the next generation of leaders — someone well on his or her way to building a legacy that matters,” Haskell said.

Jan Farrington of Jackson, Mississippi, an OMWC founding member and former chair, was among those who nominated Morgan based on her shared experiences with him on the boards of the University of Mississippi Foundation and the Ole Miss Alumni Association. The Young Alumnus of the Year recipient also serves on the advisory boards of the UM School of Engineering and the Center for Manufacturing Excellence and as an annual guest lecturer for the Chancellor’s Leadership Class.

“Markeeva sets an incredible example for Ole Miss students,” Farrington said. “While continuing to build a very successful career, he manages to take on an array of leadership and service roles, participate in many Ole Miss activities and be a loving dad to his daughters, Mallory and Sydney. He finds time to mentor students, encouraging scholarship, leadership and giving back. He and Shaquinta, also an engineering alumna, are both effective and dynamic ambassadors for the University of Mississippi."

In the Huntsville-area community, Morgan is the president of the board of directors for the Christmas Charities Year Around, a non-profit charitable organization that provides basic necessities to families all year and toys and food during the holiday season to more than 5,000 children and adults.

“My parents instilled in me a deep gratefulness; that is the genesis,” said Morgan, one of 10 children who grew up in Strayhorn, Mississippi. “Then, over the years, so many people have poured into me with no requirement to do so; so many have invested in me with no benefit to be had from the returns; so many have shared their experiences, wisdom and roadmaps; and I have no way to repay them. So, I am compelled to pay their efforts forward.”

Having the time to devote to philanthropic activities comes from combining family time and couple time with helping others, said Morgan.

“I am fortunate to be married to someone who also understands and underscores the importance of giving back. Our home is an environment of giving which not only facilitates a balance among the many demands, it actually integrates them. Some of our family time is used to give and serve. Some of my wife's and my quality time together involves charitable and other giving activities. We teach our children to be grateful for and share blessings, using them to positively impact their world.”

Randall said she hopes by recognizing Morgan and other philanthropists, young people will be inspired to act.

“Often, young people perceive philanthropy as an activity that occurs later in life as a capstone — that you need to be more seasoned to make meaningful contributions — but that is simply not the case. There are incredible examples of significant contributions being made by young people, and our goal is to celebrate them,” Randall said.

In its 18th year, the OMWC has attracted more than $13.1 million for scholarships. The $32,000 named scholarships ($8,000 annually for four years) are now among the largest on campus. Thus far, 119 OMWC scholars have benefited from the program, which features mentoring, leadership development and cultural activities.