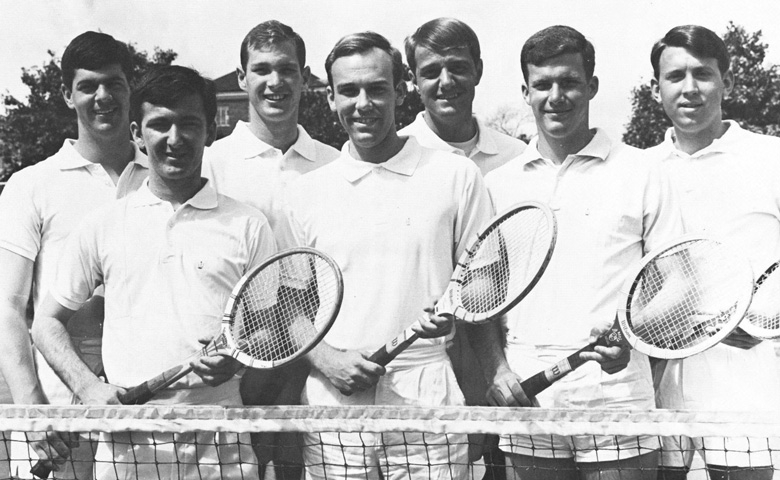 A major gift to the University of Mississippi from attorney Bill Hester of New Orleans, Louisiana, is helping give the Ole Miss tennis teams a competitive edge.

Hester, who started playing tennis at 6 years old and lettered at Ole Miss from 1967 through 1969, recently made a gift of $100,000 to the Forward Together campaign for Ole Miss Athletics. The gift will help offset construction costs associated with the new $11 million indoor tennis facility.

“The new indoor facility will help the coaches get better recruits and take this program to a whole different level, which everyone is looking forward to,” said Rebel tennis player Zvonimir Babic, a senior from Zagreb, Croatia.

Hall of Fame UM men’s head tennis coach Billy Chadwick and longtime friend of Hester agrees: “The sport has grown … The SEC is recognized as the premiere tennis league in the nation. This new building will put us now in a position where we are competitive with the top teams in the nation from the facilities standpoint. It’s an absolutely fantastic facility.”

Hester grew up in Jackson, Mississippi, where he won the state high school championship two years in a row. After high school, he enrolled at Ole Miss (also his mother Rosa’s and sister Katie’s alma mater), where he played freshman and varsity tennis for four years — the last two in the No. 1 position — and graduated with a bachelor’s degree in 1969. He then served in the U.S. Army for almost three years before returning to Ole Miss for law school, receiving his juris doctorate degree in 1974. After law school, he joined The Kullman Firm in New Orleans, where he has practiced labor and employment law for more than 40 years.

Hester said the sport has changed significantly since his college days.

“Our coach, John Cain, was an All-American running back at Alabama, and at Ole Miss, he was primarily a football coach. The so-called “minor sports” of tennis, golf, track and field were all coached by a football coach. That was their sideline,” he said. “Now, these sports have moved into the major category with full-time coaches and full-time assistant coaches, which was unheard of when I was in school.

“It’s much more competitive,” he continued. “In any given year, you’ll have five or six SEC teams in the top 15 of Division I schools. But when I was in college, I think USC won the championship every year that I was eligible to play, but that’s not the case now.

“In the four years that I played, we flew on an airplane one time: to the SEC tournament in Gainesville at the University of Florida. Now the team flies to tournaments and competitions all over the country. It’s totally different; it’s a big deal now.”

“By getting the new indoor, we can practice regardless of the weather conditions,” Babic said. “Help from supporters of the Ole Miss Tennis program, like Bill Hester, has a tremendous impact on our tennis and actually our lives. The whole team is very grateful for the donations, and we hope to cheer our donors with some big wins.”

“I’m so glad he’s getting this recognition because it’s really well-deserved — not only for the fact that he gave us a nice gift, but through the years he has been one of those forces that just elevates the program and the entire university.

“I’ll never forget our matches against LSU, Bill and his wife, Lorraine, were always in the stands,” Chadwick continued. “It was great to see a smiling face in Baton Rouge and it meant so much to the team. They were, and continue to be, fantastic supporters and outstanding ambassadors for the university.”

To support Ole Miss Athletics with a gift to the Forward Together campaign, contact Keith Carter at jkcarter@olemiss.edu, call 662-915-7159 or visit http://givetoathletics.com/forward-together/.