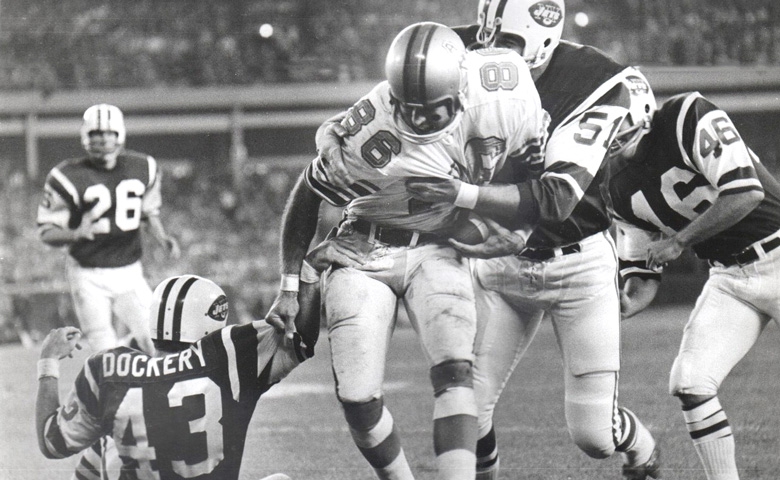 Mac Haik of Houston, Texas, knows a little something about entrepreneurship.

After a bad experience trying to buy his wife a car, the University of Mississippi alumnus and former pro football player decided to open a dealership of his own.

Haik’s interest in starting businesses inspired his most recent donation to Ole Miss: a $50,000 gift that will support the Center for Innovation and Entrepreneurship (CIE) within the School of Business Administration.

Haik said he wants to challenge others to match his gift, which will be payable in $10,000 increments over the next five years.

“Mr. Haik is a builder of companies. His gift serves as a building block for the CIE and our student entrepreneurship programs,” said Clay Dibrell, CIE executive director. “We look forward to working with other donors to cement the program gains, which Mr. Haik has started through his gifts.”

"The principles that I was exposed to at Ole Miss helped me establish a foundation that allowed me to be, and become, the best that I could be," said the Meridian, Mississippi, native who graduated in 1968 with a bachelor’s degree in business administration. “I hope my gift will in some small way allow others to maximize their skills and opportunities, especially those students who might not have the opportunity to do so, without a little help. I would ask my fellow alumni to support the CIE, as well!”

Haik said he wanted to support the CIE in particular because he believes it’s a catalyst for great improvement beyond the borders of campus: “The CIE will give many students the opportunity to learn about business at an escalated pace and to hopefully apply those entrepreneurial skills in Mississippi, creating a mushrooming effect that will stimulate many opportunities for others.”

Dedicated to the success of student entrepreneurs at the university, the CIE was developed to inspire students to create innovative businesses and enhance the economic value of all businesses within the state of Mississippi.

“But I can truly say that the present students enrolled in entrepreneurship are way ahead of where I was at the same time in my college life,” he said. “Ole Miss is doing a great job!”

Haik went by his middle name Michel until high school when someone said he cut through football opponents like “Mack the Knife” and the moniker stuck. His athletic prowess was recognized by Ole Miss coaches Johnny Vaught and Frank “Bruiser” Kinard, who offered him a full academic scholarship to play for the Rebels.

“Mother and I both took a liking to them at Ole Miss from the very beginning,” Haik recalls. “Some of my best memories are of the good, decent people and the warm and friendly atmosphere on campus. It was like a large family.”

At split end, Haik helped lead Ole Miss to three straight bowl games and a record of 21-11-1 during his three years as a member of the receiving corps. A co-captain during his senior season, he was named All-SEC second team in 1967 and received Academic All-America honors from the Associated Press in 1966. Haik is ranked among the Ole Miss single-season receptions leaders with his 33 catches in 1967.

During his UM career, Haik pulled in 54 receptions for a total of 755 yards (14.0 yard per catch average) and six touchdowns.

“Ole Miss allowed me to have great memories and receive some recognition that helped me later in life.”

Such as being selected the Houston Oilers' first-draft choice for wide receiver in 1968. Haik caught 32 passes including eight touchdowns his rookie year and was the first-ever NFL player to catch a touchdown indoors. In 2001, he was inducted into the Ole Miss M-Club Hall of Fame.

Soon after moving to Texas, Haik attended the Houston Rodeo, where he caught the eye (and heart) of a young lady working as a professional model for Ford Motor Co. He credits Sunny, now a successful interior designer, and his mother for his success; the scholarships in their names will serve as a perpetual tribute.

“My dad died when I was 9 years old but he was a great person and my mother was an extremely positive influence on my life. I always felt if I could only be half as good as she was, I would be ok,” Haik said. “Also, my wife, family and friends contributed greatly to my success but most of all the good Lord blessed me way beyond what I deserve.”

When they’re not working, the Haiks enjoy family, friends, travel, football and “trying to be of value to other people as much as we can.”

Ken Cyree, dean of the School of Business Administration, thanks Haik for his generosity.

“We are very grateful to Mr. Haik for his time and long-term commitment and for our many loyal donors like him who offer crucial private support to the university,” Cyree said.

To make a gift to the Center for Innovation and Entrepreneurship (CIE) or the School of Business Administration, visit www.umfoundation.com/makeagift or contact Tim Noss at 662-915-5932 or tlnoss@olemiss.edu.