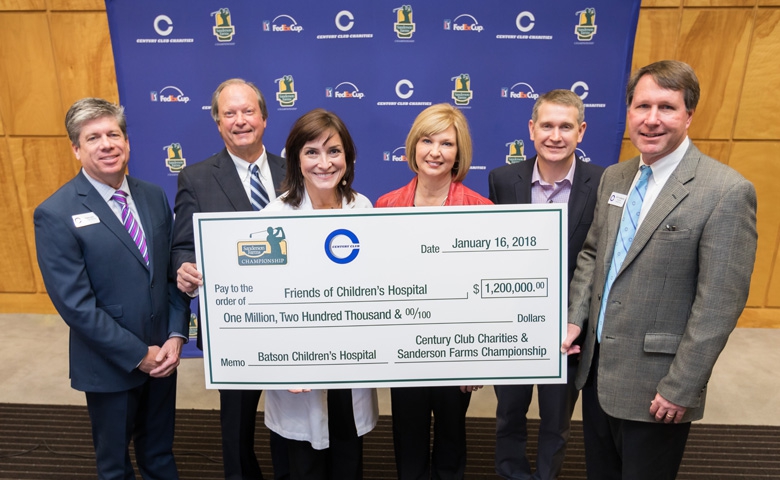 Century Club Charities announced today a $1.2 million donation to Friends of Children’s Hospital from the 2017 Sanderson Farms Championship, breaking their own philanthropic record for the fourth consecutive year.

“We strive to excel,” said Century Club Charities President Jeff Hubbard, “but our metric is different from other tournaments on the PGA TOUR. We measure excellence by the total funds raised for Friends of Children’s Hospital each year.”

During the news conference, Hubbard read remarks from Sanderson Farms CEO and board chairman Joe Sanderson. The championship “is a means to an end. It is a vehicle by which we raise money for Batson Children’s Hospital,” Hubbard read. “Not only is it the state’s only children’s hospital, but the sheer number of patients the hospital and Children’s of Mississippi cares for is amazing.”

Sidney Allen, board chairman of Friends of Children’s Hospital, expressed gratitude for the record-setting gift.

“’Wow’ is all I can say,” Allen said. “Joe Sanderson told us the amount donated from the tournament would grow every year.”

“You can feel the passion, can’t you?” Dr. LouAnn Woodward, vice chancellor for health affairs and dean of the School of Medicine, asked after hearing the words of Hubbard, Sanderson and Allen regarding children’s health.

Century Club Charities, Sanderson Farms, the Sanderson Farms Championship and Friends of Children’s Hospital, Woodward said, “have been key partners with us in helping us see a dream come true.”

Steve Jent, executive director of the Sanderson Farms Championship, said the donation is the culmination of a year of effort by thousands, including more than 800 volunteers, who work behind the scenes to make the event a success.

The tournament, the state’s only PGA TOUR event, brings with it an economic impact of more than $26 million to the region each year, Hubbard said. It is broadcast, over its four days, to a potential worldwide audience of more than 330 million, he said.

Century Club Charities’ efforts to highlight golfing excellence and the state’s hospitality while raising funds for philanthropy are expanding. The organization will host the North Mississippi Classic, a tournament on the Web.com tour, April 16-22 at the Country Club of Oxford.

The 2018 Sanderson Farms Championship will be held Oct. 25-28 at the Country Club of Jackson.