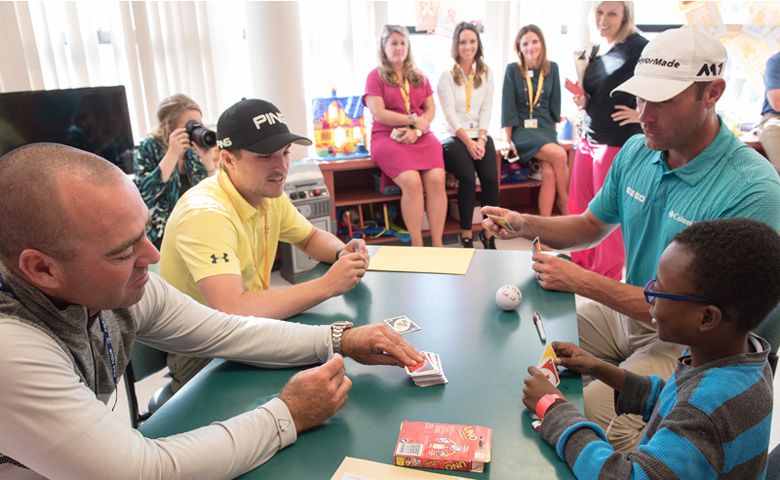 Ryan Armour may have been at the top of the Sanderson Farms Championship leaderboard when play ended Sunday, but he wasn’t the only one leading the way.

“My wife and I went to Batson a few weeks ago and were blown away by what we saw,” Carl Allen said at the dinner. “So tonight, I am making three commitments. First, to spread awareness about the hospital itself. Second, to restate my 10-year sponsorship alongside Sanderson Farms. And finally, to put my money where my mouth is, and donate a half million dollars to Batson Children’s Hospital, which is just the beginning.”

The gift was among the highlights of this year’s tournament, the state’s only PGA TOUR event and a major supporter of Friends of Children’s Hospital.

Dr. Mary Taylor, interim chair of pediatrics, knows how much these gifts can help improve the health of sick and injured children.

“After visiting our hospital – the state’s only children’s hospital – they were moved to help us achieve our vision of providing outstanding care for the children of Mississippi,” Taylor said. “We cannot thank them enough for their wonderful generosity and their genuine care and concern for Mississippi children and families.”

Tournament host Century Club Charities donated $1.125 million to Friends from the 2016 tournament. The nonprofit dedicated to raising funds for Batson Children’s Hospital has pledged $20 million to the Campaign, a $100 million fund drive for expansion of pediatric facilities at the University of Mississippi Medical Center.

Plans for the expansion include a new children’s tower with more space for neonatal and pediatric intensive care units, additional surgical suites and an imaging center designed for children. An outpatient clinic offering specialty care is planned to be built nearby.

Joe Sanderson, CEO and board chair of tournament sponsor Sanderson Farms, and his wife Kathy have led the way for other philanthropists in the state by chairing the Campaign for Children’s of Mississippi and making a personal pledge of $10 million.

The Campaign, launched in April 2016, has raised more than $58 million so far.

The Championship’s competitors support its connection to Children’s of Mississippi. On Tuesday, it brought three of them to the third-floor playroom of Batson Children’s Hospital.

Ready for Shawn East, who won an Olympic gold medal on the gymnastics balance beam in 2008 and was the featured speaker at the tournament’s Women’s Day luncheon, were patients including Orenzo Dye of Greenville, Mississippi, who had crayoned a drawing highlighting Shawn’s win on ABC’s “Dancing with the Stars” in 2009.

Maggie Hanberry, a Batson Children’s Hospital patient, had her own copy of Shawn’s book, “Winning Balance: What I’ve Learned So Far about Love, Faith and Living Your Dreams,” ready for an autograph.

“This is what makes it all worth it,” Andrew East said. “This is the most purposeful thing that we could spend our time doing, and we’re just grateful to be a part of it.”

Fresh from his UNO game with Taylor, Cook was ready to tee up in support of the state’s only children’s hospital.

“I couldn’t be more excited to play in this event and to be here to support all these children,” he said.

Children’s of Mississippi families returned the favor during the tournament, greeting and thanking spectators.

Among them were Jacob Partlow and his mother Olivia Partlow of Canton, Mississippi. Jacob Partlow, 2014 Children’s Miracle Network Hospitals Champion for Mississippi, has battled leukemia since 2009 and is now in remission.

Tara Cumberland of Preston, Mississippi, whose daughter, Sybil, has had several heart surgeries at Batson Children’s Hospital, was looking for opportunities to help as well. “We’re so grateful for the care our children received, and for the Sanderson Farms Championship, that as parents, we want to give back."