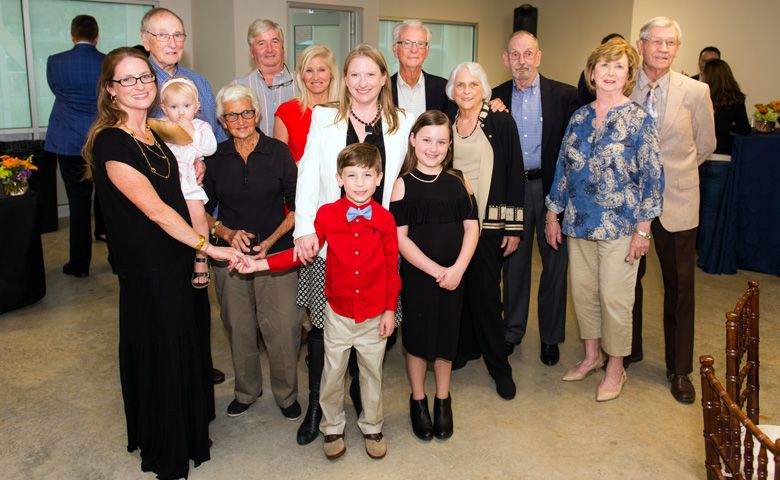 Family members gather around Gloria Kellum (fourth from right) at a recent reception hosted in her honor by the University of Mississippi Department of Political Science Advisory Board. The board acknowledged Kellum’s long-term service to the university by establishing a scholarship endowment in her name.

For her longtime service to the University of Mississippi, the Department of Political Science Advisory Board recently honored administrator Gloria Kellum by establishing a scholarship endowment in her name.

Board member Rod Taylor of Rosemary Beach, Florida, nominated Kellum for the honor due to her supportive role in the board’s formation some 15 years ago. The board has since been instrumental in helping secure internships for students, providing scholarships through other named endowments, underwriting various programs for the department and more.

“When I asked who agreed with this nomination, everybody’s hand shot up immediately as if I’d thrown a Twinkie out in front of a bunch of third-graders,” recalls board president Tom Becherer of Alexandria, Virginia. “Dr. Kellum had a hand in just about all of the amazing changes that have happened at this university since my graduation in 1986 and well before I came here. We all love this place, but I don’t believe anybody loves it more than she does.”

Taylor agreed: “It’s hard for me to imagine how there could be anybody to whom Ole Miss owes a greater debt of gratitude than Gloria Kellum.”

The Gloria D. Kellum Scholarship Endowment in Political Science will be awarded to students within the department who are eligible based on merit.

“I’m very honored and very humbled. The scholarship was such a sweet surprise to me,” Kellum said. “Student scholarships are so very important, so I thank the Political Science Advisory Board for its leadership on behalf of our students because that’s what it’s all about. Every time a scholarship is established, the donor is really thinking about our students, which is the focus of what we all do at this university.”

Kellum has worn many hats since she and her then-future husband, Jerry, joined the faculty in 1966 and has been instrumental in helping the university mark a number of milestones. The Kellums have two daughters, Kate Kellum of Oxford, Mississippi, and Kelly Kellum Weems of New Orleans, Louisiana — both Ole Miss graduates — and three grandchildren, all of whom attended a recent reception in Gloria Kellum’s honor along with many members of her extended family, friends and coworkers past and present.

“When you think about Gloria and all that she’s meant to Ole Miss, many words come to mind: teacher, administrator, incredible fundraiser, organizer, leader and friend,” Chancellor Jeffrey Vitter said. “Energetic, dedicated, smart, loyal, visionary and inspirational — all those words and many more can be used to describe Dr. Gloria Kellum and her decades-long relationship with the University of Mississippi.”

As an administrator, Kellum chaired UM’s sesquicentennial celebration, directed two major capital campaigns and provided leadership to improve race relations. On the academic side, she helped grow a small speech pathology and audiology program into a nationally accredited educational and clinical program, and taught hundreds of students.

“So much of the success and growth of Ole Miss during my years as chancellor can be credited to Gloria,” said Chancellor Emeritus Robert Khayat. “Her impact upon the university is unparalleled. Her legacy is record enrollment, record fundraising, increased academic excellence and so much more. All the momentum we have today is built upon the foundation that Gloria helped establish with other leaders at the university.”

Under her direction, the Commitment to Excellence Campaign attracted a stunning $525.9 million in private gifts, followed by the MomentUM campaign, which upped the total raised in private funds during Kellum’s tenure to some $800 million. The campaigns produced one-of-a-kind partnerships such as the 2+2 Scholarship Initiative with Northwest Mississippi Community College, the William Winter Institute for Racial Reconciliation and the Ole Miss Women’s Council for Philanthropy.

“It was a time of great change and a time of true renaissance for us,” Kellum said, crediting the widespread evolution to a number of factors: Khayat’s leadership, vision and strategic planning; the extraordinarily gifted faculty and staff who worked together and were committed to making the university the best it could be; a strong economy; and the devoted involvement of alumni and friends.

“It was a golden time for me to be a part of. Now, Chancellor Vitter and his wife Sharon have created an extraordinary team of people who are really making a difference. They have joined together our academic campus, athletic department and medical center all into one cohesive force. And it is a force to be reckoned with,” Kellum said. “I’ll tell you this: The future of Ole Miss will be one of great promise.”

“Our alumni are critical in keeping us connected to the world outside the university and influence our ability to attract the best and brightest students. The Department of Political Science has a strong alumni board that is truly invested in the success of our program, our faculty and our students,” he said. “I applaud the board’s efforts and believe it is incredibly fitting that this scholarship is named in honor of Gloria, which further extends the tremendous impact she has had upon every aspect of our extraordinary flagship university.”

How would Kellum describe her own relationship with Ole Miss?

Vitter knows her hallmark comment: “She would simply say, ‘Life is grand.’”

Individuals and organizations may make gifts to the Gloria D. Kellum Scholarship Endowment in Political Science by mailing a check with the designation noted in the memo line to the University of Mississippi Foundation, 406 University Ave., Oxford, Miss. 38655; visiting www.umfoundation.com/makeagift or contacting William Kneip at 662-915-2254 or wbkneip@olemiss.edu.