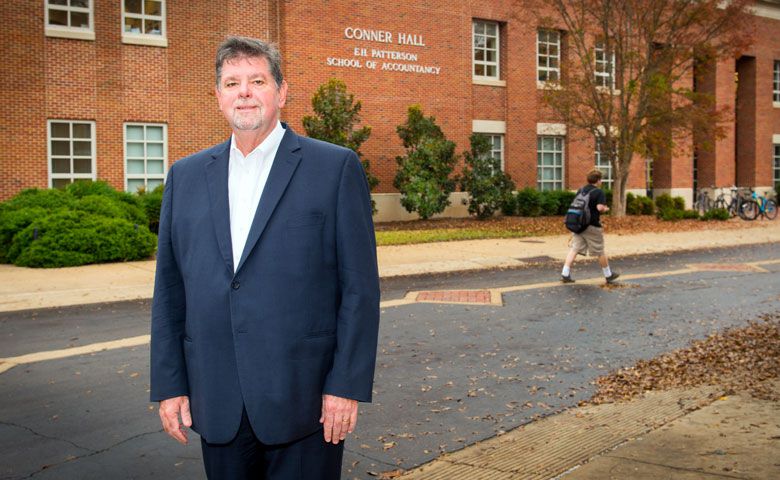 Morris Stocks, former UM provost and accountancy dean, has been named the inaugural holder
of the Don Jones Chair of Accountancy.

The University of Mississippi’s Patterson School of Accountancy has named Professor Morris H. Stocks as the inaugural holder of the Don Jones Chair of Accountancy.

Stocks, who returned to the Patterson School’s faculty in January 2017, had served in high-level administrative roles at the university for the past 15 years. As provost, executive vice chancellor and interim chancellor, Stocks provided vision and leadership related to many academic honors and advancements at the university.

“I am extremely humbled to be named the first recipient of the Don Jones Chair of Accountancy and especially heartened by the designation because I knew Don personally and considered him a great friend and colleague,” Stocks said. “This chair is a tribute to his outstanding career and significant contributions to the profession of accounting. I’m greatly honored to hold a position that represents his legacy.”

In addition to his many accomplishments as a higher education administrator, Stocks is — first and foremost — a highly talented teacher, having won the coveted Elsie M. Hood Outstanding Teacher Award in 1998 as a member of the faculty of the Patterson School of Accountancy.

“Morris Stocks has enjoyed an exceptional career at Ole Miss and we are fortunate to have him on our faculty. Morris is an outstanding teacher and mentor and he has provided great leadership for the university and Patterson School,” said Accountancy Dean Mark Wilder. “His significant academic accomplishments and achievements during his tenure at Ole Miss stand as an example to which we should all aspire.

“We are extremely grateful for the generosity of the Brockman Foundation and for honoring Don in a way that will help Ole Miss faculty and students,” Wilder continued. “Don enjoyed a wonderful career and was one of our greatest supporters. We are honored to have him as an alumnus and to have the Don Jones name forever associated with the Patterson School.”

Before assuming responsibilities as provost, Stocks served UM as senior vice chancellor for planning and operations and as dean of the Patterson School of Accountancy. Under his leadership as dean, the Patterson School was ranked for the first time in its history as one of the top 25 accounting programs in the country, a status it has retained ever since.

In fact, all three degree programs at the Patterson School are among the top 10 in the 2017 annual national rankings of accounting programs published by the journal Public Accounting Report.

The undergraduate, master’s and doctoral programs are No. 8. The master’s program leads the Southeastern Conference in the rankings and the undergraduate program is second in the SEC. One or more Ole Miss programs have led the SEC in each of the past seven years.

Before his service as dean, Stocks was associate provost for three years, with responsibilities for the academic budget and undergraduate curriculum.

Stocks received an undergraduate degree in accounting from Trevecca Nazarene University, a master’s degree from Middle Tennessee State University and a doctorate from the University of South Carolina. He is a certified public accountant in the state of Mississippi. He and his wife, Cindy, have four adult children.

In 2016, the Brockman Foundation, a charitable trust for which the late Don Jones served as financial adviser for over 20 years, established the chair in his name with a $2 million gift to the university. The endowment supports salary supplements, research and creative activity in an effort to attract and retain outstanding faculty.

“Through Don’s work, finding investment opportunities and following through with them, the Brockman Foundation was able to build to the extent to where it can now make some substantial gifts,” said Evatt Tamine, director of the Brockman Foundation. “We are able to do the work we do, to a large extent, because of the work Don did over the years. So it seemed appropriate to do something that honored him.”

The chair was announced less than two months before Jones died suddenly at his Oxford, Mississippi, home.

Melissa Jones said her husband, who was overwhelmed by the gift, told her that he hoped it would keep the Patterson School at the forefront of nationally renowned accountancy schools and give students the opportunity to excel.

“This was a very humbling experience and both of us were very grateful for the recognition,” she said. “Don felt strongly about the School of Accountancy and would tell anyone who would listen how important it was to him.

“Now, to have Morris named as chair would mean so much to Don who greatly admired Morris and his work on behalf of Ole Miss and especially on behalf of the School of Accountancy.”

At Ole Miss, Jones met Melissa Massengill, a 1968 graduate of the UM School of Business Administration. They were married on Dec. 23, 1967, and together raised a daughter, Kelly, and a son, Dru.

After graduation, Jones joined Arthur Andersen & Co. in Houston, Texas, as an auditor from 1967 to 1968. He then served a two-year stint in the U.S. Army as a second and first lieutenant, Finance Corps, before returning to Arthur Andersen until 1976. Jones then had the opportunity to join Brown & Root, Inc. in Houston from 1976 to 1981. There, he provided leadership in multiple capacities from internal audit manager to senior manager of the power division and finally as the senior manager of computer services. In 1981, he joined Universal Computer Systems, Inc. in Houston, where he was the chief financial officer until 1995, when he became chief executive officer of Pilot Management Ltd. in Bermuda. He served there until 2008.

Jones was active in his church and was a member of the Mississippi Society of CPAs, Texas Society of CPAs, Georgia Society of CPAs and the Bermuda Chapter of Canadian Chartered Accountants. He was an avid golfer, hunter and fisherman and a dedicated supporter of Ole Miss Athletics, particularly football, baseball and basketball — all of which he would watch seated next to Davis, his friend of 51 years. Additionally, he enjoyed reading, history, telling stories and spending time with his children and five grandchildren.

The Donald D. Jones Chair of Accountancy Endowment is open to gifts from individuals and organizations. To contribute, send checks with the endowment name noted in the memo line to the University of Mississippi Foundation, 406 University Ave., University, Miss. 38655; or visit www.umfoundation.com/makeagift. For more information on ways to support the Patterson School of Accountancy, contact Brooke Barnes, director of development, at brooke@olemiss.edu or 662-915-1993.