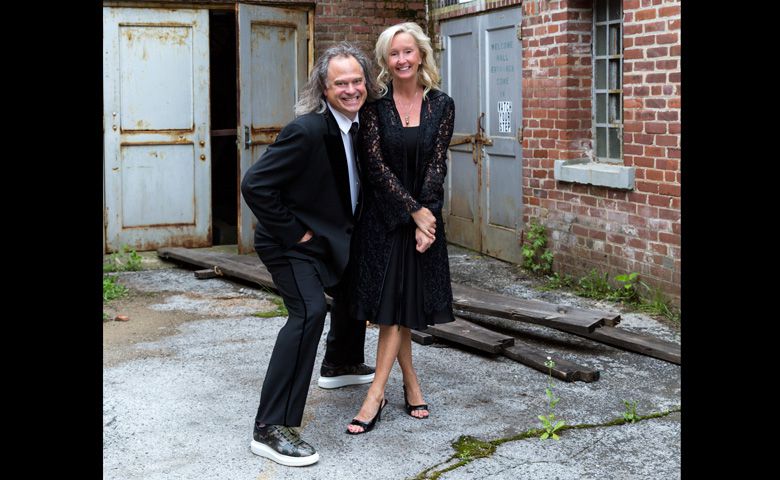 Brook and Pam Smith at Castle & Key Distillery outside Frankfort, Kentucky, where the couple are a partner. Photo by Steven Freeman.

Knowing the unifying qualities of food, Brook and Pam Smith of Louisville, Kentucky, recently pledged $1 million to support Gravy, a podcast produced by the Southern Foodways Alliance at the University of Mississippi.

“Folks in different places appreciate when someone from one cultural segment takes the time to dine with others from a different cultural segment," says Brook. "It’s a show of respect and appreciation for a culture that may be different from their own and that’s what we seem to be missing in our country today.”

Whenever the Smiths travel, they try to meet members of the Southern Foodways Alliance along the way. A member-supported non-profit institute of the UM Center for the Study of Southern Culture, the SFA sponsors scholarships, mentors students, stages symposia, collects and shares oral histories, and produces and publishes books, podcasts, and films.

On a recent trip to visit Pam’s family in Myrtle Beach, South Carolina, the Smiths detoured to Hemingway, South Carolina, where Scott’s Bar-B-Q, praised by the New York Times, attracts customers from hundreds of miles away.

“My whole life has been barbecue,” said pitmaster Rodney Scott, who just opened his own barbecue restaurant in nearby Charleston. “I grew up doing it, hanging around it and hanging around other people that do it. And there’s just no other way to bring people in quicker. It’s like a beacon sign; it just draws them right in there.”

That spirit drew in the Smiths. So did the storytelling work of the SFA.

“Gravy, which was awarded publication of the year in 2015 by the prestigious James Beard Foundation, shares stories of the changing American South through the foods we eat,” said SFA Director John T Edge. “Gravy showcases a South that is constantly evolving. We use food as a means to complicate stereotypes, document new dynamics, and give voice to the often unsung folk who grow, cook and serve our daily meals.”

Edge is grateful for the Smiths’ generous gift.

“This sort of long-term commitment offers funding stability so that the SFA can take risks to tell stories in new and bold ways,” Edge said. "At a moment when Gravy recently delivered its one-millionth download, Brook and Pam have invested deeply in our most scalable and sharable effort. They are long-time members of the organization who know and respect the role that food plays in the cultural life of our nation.”

Smith found success in the surety bonding business. He’s also a wine and distillery owner as well as a philanthropist with an interest in organizations that focus on improving life for young people and those like the SFA, which inspires communities to invest in their culinary customs and, in so doing, establishes lasting, cross-cultural relationships.

Smith also has an ongoing commitment to Appalachian Kentucky and recently established a private philanthropic fund focused on economic development in the region that includes an interest in development driven by local mountain food traditions and small scale farming.

Prior to establishing the Smith Family Gravy Boat Fund, the Smiths donated $250,000 in 2014 to support the SFA’s Smith Symposium Fellows program, which invites individuals whose work promises a positive impact on the South to be guests at the SFA's fall symposium.

Smith trusts his gift will boost operating funds, enabling the organization to better document, study, and explore the diverse food cultures of the American South.

“Food starts conversations,” Smith said “You get into who makes it and where the products come from. It’s an ice breaker. People talk about the weather, but talking about barbecue is a lot more interesting.”

UM Chancellor Jeff Vitter said private gifts are crucial to the university’s well-being and especially to programs like the SFA, which depends on donor support to operate.

“We are tremendously grateful to receive generous donations, especially from such passionate supporters as the Smiths. It speaks to the impact of our university programs, not just in the state, but across the country and around the world,” Vitter said. “The Smiths’ gift will ensure that many more people will be enriched by the SFA for years to come. These kinds of contributions are a vital part of our university’s sustained growth, reach, impact, and success.”

Individuals and organizations can make gifts to support the Southern Foodways Alliance or the Center for the Study of Southern Culture by mailing a check with the endowment noted to the University of Mississippi Foundation, 406 University Avenue, Oxford, MS 38655; visiting www.umfoundation.com/makeagift or contacting Nikki Neely Davis, development officer for the CSSC at 662-915-6678 or nlneely@olemiss.edu.