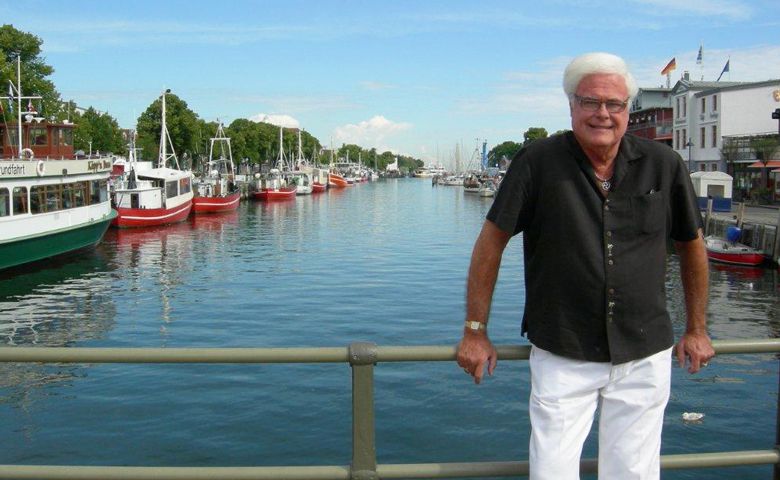 Lyt Harris, pictured here on vacation at the Baltic Sea port of Warnemunde, Germany, recently pledged to increase his Business School endowment to $100,000.

Today, recognizing the same potential in business students, Harris of Houston, Texas, has established endowments at Ole Miss and three other universities that he trusts will help his scholarship recipients achieve success.

“I’m just looking forward to getting the endowed scholarship program moving forward at Ole Miss and especially hearing from, and hopefully meeting, some of the students who receive the scholarships,” said Harris, a native of Baton Rouge, Louisiana, and 1962 graduate of the UM School of Business Administration.

Harris originally established his UM endowment in August 2016 with a $27,000 gift. He recently pledged to increase the endowment to $100,000, allowing the business school to award scholarships from it in perpetuity. This gift designates Harris as a charter member of the 1917 Order, created this year and named for the year the business school was founded. The order recognizes generous donors who thoughtfully provide for the school through major giving.

About 10 years ago, Harris funded a similar scholarship program at Northwood University in Michigan, an all-business education university, where he received an honorary doctor of laws degree and served on the board of trustees. He and his late wife, Venita, contributed to the fund regularly.

“Really, that was such a good program and I received such good feedback from the students selected for the scholarship that I thought, ‘Why not set up a similar scholarship at the University of Colorado, where Venita went to school, and also at Ole Miss and LSU, where I went to school?’

“Shortly after the fund was established at Colorado, I met my student and became good friends with him. He was very appreciative. It wasn’t the amount of money he received; he was just so amazed that he was selected for the award out of a number of students in the Economics Department who could have received it,” Harris said.

After completing graduate school at Louisiana State University in 1963, Harris rose through the ranks of Scott Paper Company where he became project manager for the first disposable diapers, which he took from test market to national distribution. Later, he joined a large division of Hunt Wesson Foods as director of marketing.

On a business trip to Chicago, Harris and his colleagues visited Marshall Fields department store where they spotted a Mason jar of popcorn labeled “with a picture of a funny little man with a bowtie,” he said, adding that a manager told them the product had become a best-seller in the store. Intrigued, Harris conducted an extensive laboratory test at Hunt Wesson and found the product to be all that Redenbacher claimed and more.

“So we went and contacted Orville in person and said, ‘You’ve come up with this strain of corn that everybody likes and we’re marketing experts. If we get together, we can do some great things and probably make you the Col. Sanders of the popcorn business.’ That’s exactly what we ended up doing,” Harris recalls. Today, Orville Redenbacher’s popcorn is the nation’s No. 1-selling brand. “If he’d never met us and we’d never met him, it probably would have never happened. He wasn’t a marketing person at all. He was just having fun with it and didn’t realize its potential.”

After Hunt Wesson, Harris worked several years as a senior executive in the banking and finance industry before moving to Houston in 1982 to become president and eventually CEO of Southwest Management and Marketing Company. There, he met his wife in 1984 at an art exhibition; both were avid collectors.

Harris sold his company and retired in 2004. He now serves as managing partner of the Harris Investment Partnership, specializing in venture capital investments including specialty foods, residential real estate, drug and alcohol rehabilitation centers and other projects.

Always active in civic and charitable activities, Harris has served on the boards of a number of nonprofit organizations, including The Kidney Foundation, Junior Achievement, Boy Scouts of America, Big Brothers/Big Sisters and St. Luke's United Methodist Church. During his business career he was listed in Who's Who in America, Who's Who in Finance and Industry and Who's Who in the South and Southwest.

He has served as a mentor for MBA students at the Ole Miss business school and was named an Otho Smith Fellow in 2008. He is also a mentor for middle and high school students in the Spring Branch Independent School District in Houston.

“I enjoyed the whole college experience and being in such a beautiful setting as the university and the Oxford area,” he said. “It was a great environment for learning and for going to school and enjoying a large variety of activities. Hopefully, setting up the scholarship program will allow me to come back to the campus more often for things connected with it.”

The Lyttleton T. Harris IV Endowed Scholarship is available to full-time students in the School of Business Administration who are marketing majors and have a minimum 3.0 grade-point average.

“Mr. Harris’s generous gifts encompass the scope of work we do here by meeting the financial needs of students who want to pursue an education in business. We are especially pleased that this gift will be part of the 1917 Order, which is part of the 100-year celebration of the founding of the School of Business, and will allow for the expansion of our success during the next 100 years,” said Business Dean Ken Cyree. “We are very grateful to Mr. Harris for his time and long-term commitment and for our many loyal donors like him who offer crucial private support to the university and specifically the School of Business Administration.”

The Lyttleton T. Harris IV Endowed Scholarship is open to gifts from individuals and organizations. To contribute, send checks with the endowment name noted in the memo line to the University of Mississippi Foundation, 406 University Ave., University, MS 38655; visit www.umfoundation.com/makeagift; or contact Tim Noss at 662-915-5932 or tlnoss@olemiss.edu.