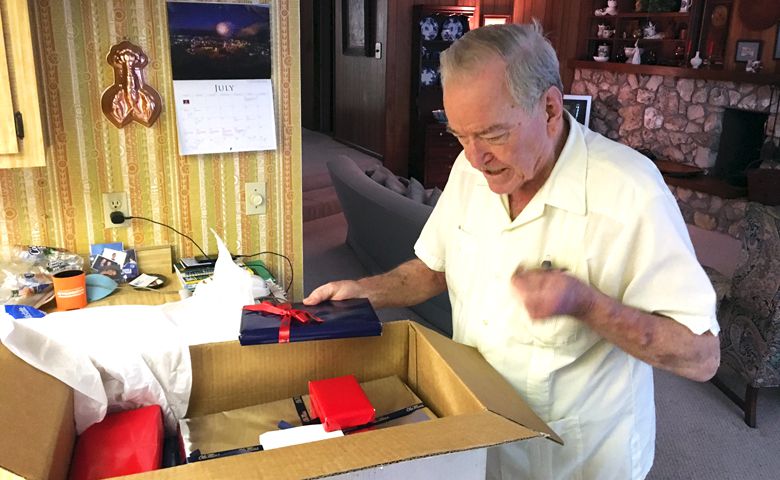 Dr. Creighton Wilson at home in Gainesville, Florida, opens a box of Ole Miss memorabilia sent to him from the UM Foundation in recognition of his many years of giving to the university.

In 2007, Dr. Creighton Wilson of Gainesville, Florida, established a scholarship endowment at the University of Mississippi with $100,000 from a real estate sale and he has added to the endowment with an IRA rollover every year since.

“He is a model donor,” said Wendell Weakley, president and CEO of the University of Mississippi Foundation. “The cost of higher education continues to rise at a much higher rate than headline inflation. If it were not for very generous donors like Dr. Wilson, many of our students simply could not attend college and the economic effects of that would be even more troubling in this uncertain economy.”

The Dr. Creighton L. Wilson Scholarship Endowment is available to eligible full-time students in any school or college on the university’s Oxford campus.

Wilson says he has continued to consistently increase his endowment over the last decade out of a sense of obligation: “Well, I just feel like I owe it to the university. I am what I am partly because of the education I got there.”

The donor hopes his gift will spare students the financial burden associated with paying their way through school as he did. Wilson was paid 30 cents an hour working at the YMCA and slightly more working in the cafeteria.

Even so, the hard work paid off. In a series of letters to Weakley, Wilson wrote: “I have been very fortunate, all things considered, in the way my life has evolved. I had a beautiful wife who mothered my three wonderful children. I achieved a certain degree of success in my chosen field and, although not wealthy, enough financial assets to lead a comfortable life. The major contributors to my present status — my parents, my brothers and all the teachers of my earlier years, and anyone who positively influenced me in my formative years — deserve my everlasting gratitude. And last, but certainly not least, Ole Miss is the institution to which I owe the most appreciation for the education I received and the ability to enter the real world and make a small effort at its betterment.

“What better way to show thanks than to give back in some form of financial support — to make it possible for some less fortunate student to be given the opportunity for reaching their noble goal in life,” he continued. “The meager amount I have dedicated to an unrestricted scholarship in my name is the least I can do to repay her gift. I will continue to add my annual gift as long as I am able. I hope many others will do the same.”

“Attending Ole Miss stands as one of the most influential and formative decisions of my life and it would not have been possible were it not for the empowerment I was given from the Dr. Creighton Wilson Scholarship,” Houry said. “My education received a vital boost from Dr. Wilson, and I hope someday to follow his example and give back so that others might also have the wonderful Ole Miss experience I've been afforded.”

McCall shares similar sentiments: “Receiving the Creighton Wilson Scholarship has helped provide funding for my schooling so that I have not had to worry about finding a job and have been able to focus intently on my studies. I am extremely thankful for this award.”

Wilson said his days at Ole Miss were vastly different from the university his scholarship recipients have experienced. Being wartime, the draft was in full effect, calling many students into World War II.

“Early in my freshman year, there was a war movie at the old Lyric Theater, starring Joan Leslie and Robert Hutton. Jimmy Christenberry, a fellow frosh, was so smitten with Joan he wrote her a letter, asking permission to form a fan club in her name … and I, along with several others, became charter members,” Wilson said. “Sadly, the long arm of the Selective Service System reached out, scooped Jimmy up, and I never saw or heard from him again, the same fate of several of my classmates and friends. By the Grace of God and a tender age of 14, I was spared the fate unknown.”

Meanwhile, other students were returning home.

“The University erected a series of temporary buildings to serve as classrooms for the influx of veterans in search of the educational benefits offered by the GI Bill,” Wilson said. “In my mind, it represented the beginning of a new era, culminating in the elevated status the institution enjoys now. I feel very fortunate in having been able to participate in that remarkable evolution.”

Wilson comes from a long line of Ole Miss alumni. His father, C.L. Wilson, and three brothers all graduated from the university. Now, thanks to the scholarship he established, the legacy of graduates continues.

“The Creighton Wilson scholarship has meant so much to me,” Olson said. “It has been so much more than just an amount of money. It has been an opportunity; it has been my dream. It created my future and gave me the ability to walk down the path to reach my destination.”

The Dr. Creighton L. Wilson Scholarship Endowment is open to gifts from individuals and organizations. To contribute, send checks with the endowment name noted in the memo line to the University of Mississippi Foundation, 406 University Ave., University, Miss. 38655 or visit www.umfoundation.com/makeagift. For more information on establishing scholarship endowments call 662-915-5944.