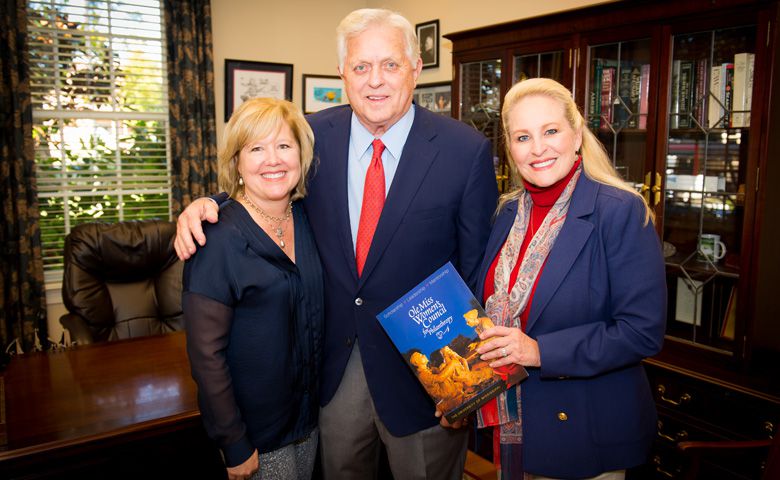 To recognize and celebrate the significant legacy of University of Mississippi Chancellor Emeritus Robert C. Khayat, the Ole Miss Women’s Council for Philanthropy (OMWC) has created a scholarship endowment in the leader’s name.

“When our scholars graduate, we want them to be mindful of leadership, mentorship and philanthropy, the three flagship components of our program,” said Karen Moore of Nashville, Tennessee, the 2015-16 OMWC chair. “There’s no better example of these attributes than Robert Khayat. He has had tremendous influence on our university’s achievements, inspiring us to honor him in this way.”

Khayat was chancellor when the OMWC was formed and has continued to be a source of support and encouragement to the council, calling its scholarships some of the most “innovative in the nation.” In addition, Khayat established an OMWC scholarship to honor the contributions and support of his wife, Margaret, in her role as the university’s First Lady.

The Ole Miss Women’s Council Robert C. Khayat Endowment was established with an initial gift of $135,000 raised through the success of the 2016 Legacy Award Dinner, during which Khayat was named recipient of the prestigious award.

Scholarship recipients will be full-time entering freshmen who have demonstrated academic ability and leadership potential. In addition to maintaining a 3.0 grade-point average through eight semesters of scholarship eligibility, the student must participate in leadership development and mentoring sponsored by the OMWC.

“As members of the Ole Miss Women’s Council, it’s our great responsibility and privilege really to see our outstanding young men and women excel in college and ultimately in life,” said Mary Haskell of Oxford, Mississippi, 2016-17 OMWC chair. “We believe the Robert C. Khayat endowment will play a central role in helping us encourage students to succeed just as Dr. Khayat did as chancellor.”

Khayat said he considers the endowment a great honor.

“These ladies are deeply committed to our students, the lifeblood of our university,” he said. “I’m extremely grateful to them for their generosity, not only financially but also for the time they dedicate to mentoring our scholars. While I’m humbled by this endowment, I very much appreciate their thoughtfulness.”

The Ole Miss Women’s Council Robert C. Khayat Endowment is open to gifts from individuals and organizations. To contribute, send checks with the endowment name noted in the memo line to the University of Mississippi Foundation, 406 University Ave., University, Miss. 38655; visit www.umfoundation.com/makeagift. For more information on the OMWC, visit www.omwc.olemiss.edu or contact Nora Capwell at ncapwell@olemiss.edu or 662-915-2384.

About the Ole Miss Women’s Council

The OMWC is an innovative program that provides scholarships and counsel for students destined to be leaders. Helmed by an accomplished cadre of female leaders and philanthropists, the OMWC provides scholarships for tuition and books for young men and women as well as guidance and training in leadership skills, career development and personal growth throughout the students’ tenure at the university.

Khayat’s experiences reflect an exceptional life journey that shaped his leadership. While an Ole Miss student, he excelled in the classroom, earning both undergraduate and law degrees. As the place-kicker on the Ole Miss Rebels football team, he helped secure many victories under legendary Coach John Vaught. He also had great success as catcher on the baseball team. Lessons learned from teamwork, competition, discipline and perseverance prepared him for other pursuits. His unusual resumé includes both “All-Pro kicker for the Washington Redskins” and “Sterling Fellowship for a Masters of Law from Yale Law School.”

As chancellor, he helped found an honors college and institutes of international studies, leadership, and racial reconciliation. He secured a coveted Phi Beta Kappa chapter, attracted millions in private support and hosted the 2008 Presidential Debate. He transformed the campus through renovation, landscaping and construction — including adult and children’s hospitals, a chapel, a performing arts center and an indoor athletics practice facility. Under Khayat’s leadership, student enrollment increased by 43 percent and the University’s budget grew from $500 million to $1.5 billion annually.

In addition to his work at Ole Miss, Khayat served as a member of the board of directors for Sanderson Farms Incorporated, the United Southern Bank, Mississippi Valley Title Insurance Company, The Joseph Bancroft Foundation, Mississippi Power Company and The Newseum.

A memoir by Khayat, “The Education of a Lifetime,” was selected for the University’s 2015 Common Reading Experience. Each incoming freshman received a copy of the book and was encouraged to read it before Khayat spoke at the fall convocation.