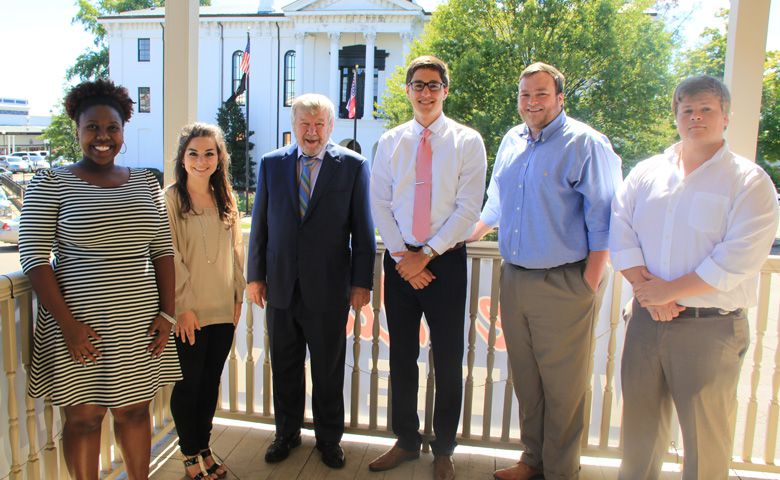 Attorney Grady Tollison, a 1971 graduate of the University of Mississippi School of Law, is helping others pursue the education they need to enter the profession that gave him a successful career.

“To this day, I feel indebted to the Law School and my professors,” said Tollison of Oxford, Mississippi, after recently establishing the Grady Tollison Law Scholarship with a $200,000 gift to the university.

Tollison, the senior partner in Tollison Law Firm, P.A., has met the five first-year law students who are already benefiting from his generosity: Kelsey Nicholas of Marion, Illinois, who received a bachelor’s degree in forestry with a focus on wildlife management from Mississippi State University; David Rucker of Germantown, Tennessee, a UM applied sciences graduate with an emphasis in criminal justice; Addison Watson of Oxford, a graduate of Missouri State University with a degree in criminology; Michael Williams of Richland, Mississippi, a graduate of UM’s Patterson School of Accountancy; and Nia Wilson of Jackson, Mississippi, a Mississippi State graduate with a degree in communications.

“They are really an outstanding group of students,” he said. “I was impressed with the diversity of the recipients and their interest in the law.”

Deborah Bell, interim dean, noted how important scholarships are for Law School students and how thankful the school is for the gift.

“Grady Tollison is one of our most outstanding graduates, with a distinguished career as a trial attorney and a leader in the Mississippi Bar,” said Bell. “We deeply appreciate his generosity in giving back to students in need of support during law school.“

The students were also quick to express their gratitude for Tollison.

“I am incredibly blessed to have received the Tollison Scholarship,” Nicholas said. “It is truly an honor to have someone so generously invest in your future career from the very first day of law school, and it speaks volumes with respect to just how much Mr. Tollison cares for the Ole Miss School of Law.”

Rucker agreed: “This scholarship is an unbelievable generosity on the part of Mr. Tollison, and I’m extremely grateful for the opportunity.”

“Mr. Tollison’s generosity allows me to pursue a legal education without having to worry about the burden of debt that so many students have to stress about,” Watson said. “This scholarship affords me the opportunity to explore different career paths that won’t revolve around paying back students loans.”

“This scholarship is an indescribable honor,” Wilson said. “Law school is a challenging endeavor, but with the support and encouragement of Mr. Tollison, I’m motivated to face this challenge head on.”

Williams said he hopes to help students as Tollison helped him: “The Tollison scholarship was a blessing to me because it helped make my dream of being a lawyer financially feasible, and I hope one day I have the chance to give back to the university like he did.”

Financial constraints almost prevented Tollison from attending law school. After serving in the military at a time when the United States was not at war, he was unable to use the G.I. Bill to help fulfill his lifelong dream of becoming a lawyer. With debt piling up from his undergraduate tuition at Southwestern College (now Rhodes College) in Memphis, Tennessee, Tollison moved to Coahoma County, where he coached high school football from 1962 until 1969.

During this time, the military decided to retroactively approve G.I. Bills and Tollison was able to enroll in UM’s Law School. There, he excelled, becoming editor-in-chief of the Mississippi Law Journal, recipient of the Dean Robert J. Farley Award for the highest grade-point average in his graduating class, and recipient of the Mississippi Bar Foundation Award for the highest GPA among the three graduating classes.

His achievements continued after graduation: Tollison was recognized as the 1988-1989 Outstanding Alumnus of the UM Law School and he previously chaired the prestigious Lamar Order. In the 1978-1979 and 1989-1990 academic years, he taught in the school as an adjunct professor.

Tollison has provided leadership as president of the both the Lafayette County and Mississippi Bar associations and is a member of the American Bar Association. He served as parliamentarian, secretary and treasurer of the Mississippi Trial Lawyers Association. Additionally, he was a state delegate and governor to the National Board of the Association of Trial Lawyers of America.

He is a charter member of the Mississippi chapter of the American Board of Trial Advocates and a recipient of the Masters in Trial Award given by ABOTA.

To make a gift to the UM School of Law, mail a check with the school noted in the memo line to the University of Mississippi Foundation, 406 University Ave., Oxford, MS 38655; visit www.umfoundation.com/makeagift; or contact Suzette Matthews, development officer for the Law School, at 662-915-1122 or suzette@olemiss.edu.