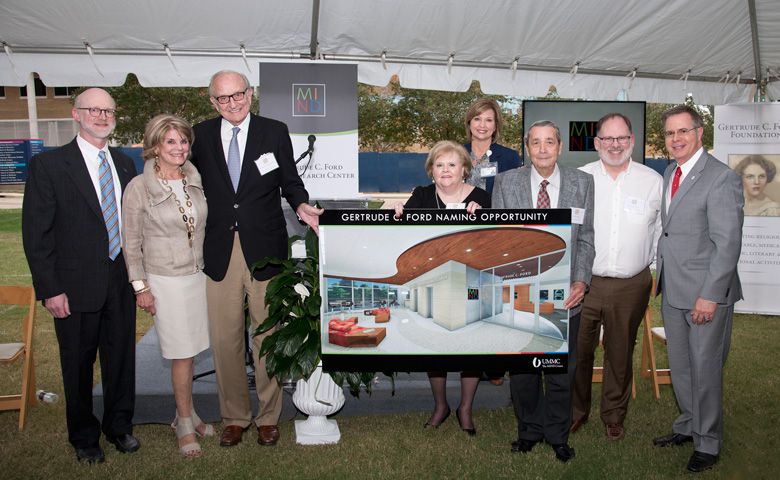 The gift could not come at a better time.

“Americans are living longer than ever and with the aging of the baby boomer generation, we are facing a silver tsunami,” said Dr. Tom Mosley, director of the Memory Impairment and Neurodegenerative Dementia (MIND) Center, at the Nov. 7 ceremony on the UMMC campus.

The sixth-leading cause of death in the United States, more than 52,000 Mississippians have Alzheimer's or similar conditions.

“That number is expected to double by the year 2030 and triple by 2050 unless we find ways to slow, stop or ultimately prevent these devastating illnesses,” Mosley said.

That is the goal of the MIND Center. Founded in 2010, it brings together research in risk factors, brain imaging and genetic technologies to make discoveries about Alzheimer's disease. In addition, the MIND Center Clinic offers diagnosis and outpatient treatment for patients with memory loss and cognitive impairment.

“In just six years, Dr. Mosley and the MIND Center have put UMMC on the map in the brain-aging field by leading the country in research on Alzheimer's and dementia,” said Dr. LouAnn Woodward, vice chancellor for health affairs.

In addition to its population-based studies, in 2016 the MIND Center expanded its research portfolio to include clinical trials. The first, the nationwide IDEAS study, launched this fall.

The Ford Foundation's gift will support the overall research mission of the MIND Center.

Research investment is great news for the MIND Center and for the state of Mississippi. According to the American Association of Medical Colleges, every dollar invested in research at medical schools and teaching hospitals like UMMC generates $2.60 of economic activity.

“This generous gift from the Ford Foundation will help us draw top talent and NIH funding to Mississippi, both of which are critical to our continued success,” Mosley said.

Gertrude Castellow Ford, wife of former U.S. Congressman Aaron Ford, grew up in a tradition of philanthropy. In 1991, she established the Foundation in Jackson, which invests in the arts, medicine, science and the overall enrichment of Mississippians.

The Ford Foundation's gifts to the University of Mississippi campus in Oxford total $55 million, including $25 million supporting the Ford Center for the Performing Arts and $25 million toward a new STEM building currently under construction.

“The University of Mississippi treasures our long-standing relationship and philanthropic partnership with the Gertrude C. Ford Foundation,” said Dr. Jeffrey Vitter, chancellor of the University. “Their support has been tremendous in helping our university achieve greater heights of excellence.”

At UMMC, the Foundation helped provide funds for the Suzan B. Thames Chair of Pediatrics. In 2013, the MIND Center received $1 million from the Ford Foundation help establish its overall operations.

At Monday's announcement, the Ford Foundation added $9 million to the initial 2013 gift. With $10 million in cumulative funding, the MIND Center will rename its research arm after Ford.

“We are proud that the Gertrude C. Ford name will be displayed in perpetuity on our campus,” said Woodward, the Medical Center's institutional leader.

John Lewis, a trustee for the Ford Foundation, spoke at the event and noted the commitment of UMMC's leadership to the health of all Mississippians.

“We invest in people's dreams and visions,” Lewis said. “This investment is a step towards the end of Alzheimer's disease.”

“We must have an unwavering vision of where we will go, act boldly and think creatively, because there is too much at stake,” Palmer said.

The Ford MIND Research Center will occupy 15,000 square feet on the first floor of the Translational Research Center, a multidisciplinary building scheduled to open in summer 2017.

The west wing of the facility will house the research clinic offices, Mosley said.

“In addition to state-of-the-art equipment, we have designed the space to be maximally accessible to our older research participants. These details include everything from the color scheme to the type of exam tables we will use,” Mosley said.

The east wing will house research and administrative space for scientists and operations staff.

“For the first time, all of our researchers will be under one roof,” Lafferty said. “This will allow us to expand, collaborate and accelerate the discovery process, and it will support the recruitment and retention of top investigators.”

The MIND Center's current programmatic priorities include the creation of an early-career investigator program. This will fund “rising star” scientists as they develop their research studies. A related aim is to create a discovery fund, which will provide seed money for promising lines of scientific inquiry. This will allow scientists to develop their research ideas and make them more competitive when seeking outside funding.

The location also brings the Ford MIND Research Center physically closer to allied teams. The Department of Data Science in the Bower School of Population Health and the Neuroscience Institute will also have space in the building.

“The Translational Research Center will promote collaboration and synergy amongst UMMC's neuroscience researchers and drive the translation of their scientific findings into new methods and treatments that will improve the health and lives of Mississippians,” Woodward said.

“Through the work that we will conduct in the Ford MIND Research Center, we intend to have a profound impact on the health and well-being of our rapidly aging population,” Mosley said.